This focused series on “Mechanical Extracorporeal Cardio-Respiratory Supports in General Thoracic Surgery” is edited by Andrea Dell’Amore and Nizar Asadi.

Dr. Dell’Amore graduated from Bologna University School of Medicine in the 2001. Over the year, he obtained his specialization first in Cardiac Surgery (University of Bologna) and then in Thoracic Surgery (University of Chieti). Since 2018 is a Consultant Thoracic Surgeon at the Thoracic Surgery and Lung Transplantation Unit at the Department of Cardio-Thoracic and Vascular Science University Hospital of Padua, Italy. He is particularly experienced in mechanical cardio-respiratory support and extracorporeal membrane oxygenation devices (ECMO). He is actively involved in the lung and heart and lung transplantation program of the University of Padua. He is an active member of several scientific societies as SICT, ELSO, EACTS, etc. His clinical and research activities are focused on minimally invasive thoracic surgery, lung transplantation, tracheal surgery and thoracic oncology.

Dr. Asadi was qualified in medicine at the University of Bologna in Italy in 2006 and completed his training in thoracic surgery in Italy and the UK. He worked in the most important trusts in the country including Royal Brompton and Harefield Foundation Trust and Great Ormond Street Hospital. In 2017, he was appointed as a thoracic surgeon consultant at The Royal Brompton and Harefield Foundation Trust. Dr. Asadi is involved in and leading several projects in the digitalization of the NHS. He led several research projects in adult and paediatric thoracic surgery and did present and lectured in national and international conferences in Europe and in the Middle East. He is also an active member in several scientific societies including the European Society of Thoracic Surgeons and the Society of Cardiothoracic Surgery in Britain and Ireland.

Disclosure:
The series “Mechanical Extracorporeal Cardio-Respiratory Supports in General Thoracic Surgery” was commissioned by the editorial office, Current Challenges in Thoracic Surgery without any sponsorship or funding. Andrea Dell’Amore and Nizar Asadi are serving as the unpaid Guest Editors for the series. 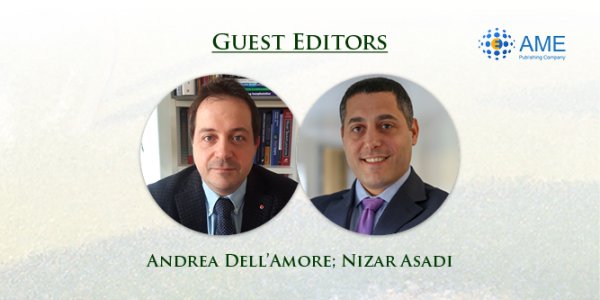