This series on “Recent Advances in Perioperative Care in Thoracic Surgery and Anesthesia” is edited by Dr. Jean Bussieres, Université Laval, Quebec City, Canada and Dr. George Rakovich, University of Montreal, Montréal, Canada. This series deals with current problems in perioperative care in thoracic surgery and focuses on anesthesia and pain control issues as well as enhanced recovery pathways in the setting of minimally invasive thoracic surgery.

Dr. Bussieres earned his MD degree from Université Laval in 1978. He completed a residency in anesthesiology and subspeciality training in cardio-thoracic anesthesia at Université de Montréal in 1984. He has been a staff member at IUCPQ-UL since 1984. His main interest is thoracic anesthesia, more specifically lung isolation technique and management of one lung ventilation. Post-thoracotomy and thoracoscopy analgesia also present a great interest for him.Dr. Bussieres published several articles in major anesthesiology journals and chapters in textbooks. In 2017 he published a handbook on thoracic anesthesia. For more than 15 years he presents workshops on lung isolation at University level and in national and international meetings. He has been invited to lecture at several national and international conferences such as the annual Thoracic Anesthesia Symposium. He is also a frequent reviewer for the Canadian Journal of Anesthesiology and the Journal of Cardiothoracic and Vascular Anesthesia.

Dr. Rakovich has previously served as Associated Editor of the Canadian Respiratory Journal where his focus was on developing educational case-based content. He currently also serves on the editorial board of the Canadian Journal of Respiratory, Critical Care, and Sleep Medicine.

Disclosure:
The series “Recent Advances in Perioperative Care in Thoracic Surgery and Anesthesia” was commissioned by the editorial office, Current Challenges in Thoracic Surgery without any sponsorship or funding. Jean Bussieres and George Rakovich are serving as the unpaid Guest Editors for the series. 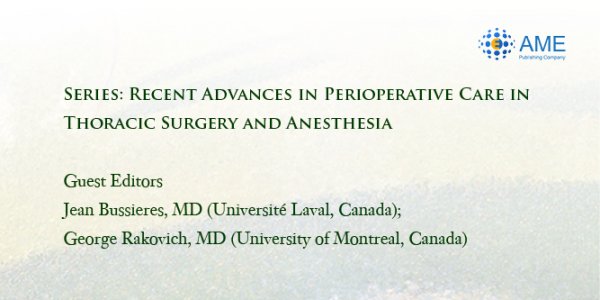