Lung transplantation in China: a new era in perspective

The development of lung transplantation (LTx) in China

LTx has been an established treatment for patients with end-stage lung disease. In 1949, Demikov in the USSR first performed LTx experiments in dogs (1). A year later, in 1950, Metras in France reported a successful left LTx in dogs (2). In 1963, Hardy and Webb, at the University of Mississippi, Jackson, USA, obtained permission to perform LTx on a human recipient, who survived for 18 days but died of renal failure and infection (3). Since then, there have been attempts at lung, lobar, and heart-lung transplants, but the outcomes were disappointing (4). With the refinement in surgical techniques, the introduction of cyclosporin, and careful selection of patients, in 1983 in Toronto, Cooper and colleagues performed the first successful single LTx on a patient with idiopathic pulmonary fibrosis (IPF), who survived for 7 years after the operation but eventually died of renal failure (5). In 1986, the first successful bilateral LTx was performed by the Toronto group (6). These major landmarks ushered in the modern era of clinical LTx.

In China, clinical LTx was first attempted by Dr. Xin Yuling, an assistant to Dr. Norman Bethune, who witnessed early animal LTx experiments by Demikhov during his training in the Soviet Union. In January 1979, Dr. Xin performed a single left LTx on a 31-year-old man whose lung was severely damaged by tuberculosis. The transplanted lung developed complete white-out on the 5th postoperative day and had to be resected on day 7 (7). In November 1979, Dr. Xin made a second attempt at LTx by performing a lobar LTx on a 22-year-old woman with lung damage owing to tuberculosis. The patient developed acute rejection, and the transplanted lung also had to be resected. Eventually, the patient succumbed to pulmonary embolism on day 32 (8). This was followed by a hiatus of more than 10 years in LTx activity in China.

In 1995, the first successful case of single LTx in China was performed by Professor Chen Yuping at the Beijing Anzhen Hospital in a patient with pulmonary fibrosis, who survived for 5 years (9). Between 1995 and 1997, Prof. Fengrui Zhao from the Beijing China-Japan Friendship Hospital performed a single LTx on three patients with pulmonary fibrosis, chronic obstructive pulmonary disease (COPD) with concurrent squamous cell carcinoma, and tuberculosis. The longest survivor died on day 48. Two of the patients died due to acute rejection, while the third patient succumbed to severe infection (10,11). In 1998, the first successful bilateral LTx was performed in the Anzhen Hospital on a patient with pulmonary artery hypertension, who then survived for 4 years and 3 months (12).

However, the challenges of post-transplant infection and rejection continued to hamper the development of LTx in China. To broaden the LTx experience, many thoracic surgeons underwent further training in North American centres, notably in St. Louis and Toronto. In 2002, Dr. Jingyu Chen returned to Wuxi after training in Toronto and performed single LTx on patients with emphysema (13) (Figure 1). This marked the beginning of the Wuxi Lung Transplant Centre, which was modelled on the Toronto Lung Transplant Program, with emphasis on the transplant recipient’s multidisciplinary care. Over time, Wuxi has evolved into the largest LTx program in China, and since 2016, it has been performing over 100 cases of LTx per year. In 2017, Dr. Jingyu Chen became involved in the LTx program at the China-Japan Friendship Hospital. Since then, there has been an exponential increase in LTx activity at that hospital, with 107 cases performed in 2018. At the time of writing, the centres performing the largest number of LTx in China are the Wuxi People’s Hospital, China-Japan Friendship Hospital, the First Affiliate Hospital of Guangzhou Medical University, and the Shanghai Pulmonary Hospital. 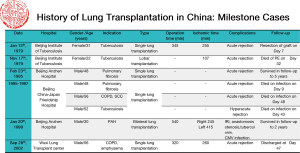 Figure 1 Milestone events in the history of lung transplantation in China. Reproduced with permission (14).

Legal developments in China regarding organ procurement and utilization

In 2003, the initial official criterion for brain death was established by the Chinese Ministry of Health, which has provided the legal foundation for the development of an organ donation program. In 2007, the Regulations on Human Organ Transplantation became the first organ transplantation law in China to be promulgated by the State Council. This established the legal basis for the development of qualified transplant centres and prohibited the illegal use of organs (15).

Amendment (VIII) to the Criminal Law of the People’s Republic of China was issued by the Supreme People’s Court in 2011, specifying the regulation for criminal organ trafficking. Interim Provisions on Human Organ Procurement and Allocation were implemented by the National Health and Family Planning Commission (NHFPC) in 2013.

In 2010, the policy of donation-after-cardiac-death was initiated, and the Law of the People’s Republic of China on the Red Cross Society was issued in 2017. As a result of these two laws, more than 30 regulatory documents were issued for the supervision of the process of organ donation and transplantation, especially on the prohibition of transplant tourism and regulation of living donor organ transplantation (16).

On 1 January, 2015, China officially announced that voluntarily donated organs would be the sole legal source of transplantable organs. This has had a profound impact on the medical profession and the general public at large. By 2019, there were more than a million registered organ donors, according to the China Organ Donation Administrative Centre. The transplant organs can only be from volunteer donation and where the next of kin has provided written informed consents with free will.

The NHFPC, the Ministry of Public Security, the Ministry of Transport, the Civil Aviation Administration of China, the China Railway Corporation, and the Red Cross Society of China (RCSC) jointly worked together to develop the Green Channel of human organ transportation. This provided a fast-tracked security check of organs, and staff involved in organ transportation and logistical support to connect high-speed trains, commercial flights, and highways seamlessly. On 6 May, 2016, the Code of Organ Transportation was enacted with a 24-hour on-call liaison system for dispatch. Different combinations of transportation routes can be chosen to achieve the shortest transportation time, and therefore the shortest ischaemic time, for the organ in question (14).

Infrastructure for organ donation and transplantation in China 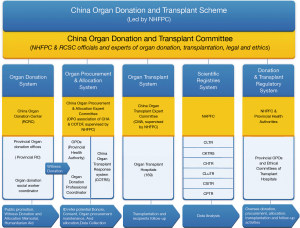 All organ allocations in China have to take place through the official organ allocation system, called the China Organ Transplant Response System, which performs automated patient-oriented organ matching, based on scientific organ allocation policies. Internationally recognized principles and experiences were referred to for determining the priority of allocation. The priority principles that were adopted include: region, disease severity, blood type matching, tissue matching, rare opportunities, immediate family of the organ donors (17). In 2010, the Wuxi Lung Transplant Center was given the supervisory role of the national LTx data, with the establishment of the Chinese Lung Transplantation Registry and Data Management Centre. In 2015, the China Lung Transplantation Registry (CLuTR) was brought into service. The CLuTR is a scientific registry system of LTx data in China that collects the data of donors and recipients in a comprehensive and timely manner.

By the end of 2019, the CLuTR has collected data from over 1,900 lung transplants performed in the 43 qualified LTx centres nationwide (excluding Hong Kong, Macao, and Taiwan). According to the provisions of the National Health Commission, all LTx centres in China should submit data to the CLuTR. Since its inception, 27 LTx centres have reported their data to the registry. 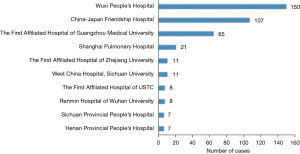 Figure 3 The top 10 medical institutions by the number of lung transplantation cases in 2018 in China.

Clinical lung transplant started in China in the 1970s, however it was in the beginning of the 21st century when significant number of cases were being performed. The upward trend of lung transplant operations performed every year is very promising for the field. The majority of LTx operations in China have been concentrated in a handful of centers, where some of them performed over 100 LTx per year. The establishment of the legal framework on organ donation in China ensures healthy development of the field of solid organ transplantation. While many challenges still exist, nevertheless the establishment of the CLuTR promises not only appropriate matching of donor and recipients, but also a wealth of data which will further allow practitioners in China and beyond to learn from the Chinese lung transplant experience.

Provenance and Peer Review: This article was commissioned by the editorial office, Current Challenges in Thoracic Surgery for the series “Highlights of the First International Symposium on Lung transplantation, Wuxi, China, 2019”. The article has undergone external peer review.

Conflicts of Interest: All authors have completed the ICMJE uniform disclosure form (available at https://ccts.amegroups.com/article/view/10.21037/ccts-21-10/coif). The series “Highlights of the First International Symposium on Lung transplantation, Wuxi, China, 2019” was commissioned by the editorial office without any funding or sponsorship. JC served as the unpaid Guest Editor of the series. The authors have no other conflicts of interest to declare.