Lung cancer remains the most severe cancer in China (1). With the prevalence of low-dose computed tomography, more and more pulmonary nodules are found, especially the ground-glass nodules in the lungs (2). Among them, mixed ground-glass opacity (GGO) has a higher malignant tendency, more solid components indicating a higher possibility of invasive adenocarcinoma. The surgical management for GGO are mainly sub-lobar resections consisting of wedge resection and anatomical segmentectomy. Wedge resection is mainly used for pure GGO in the outer third of the lung, whereas anatomical segmentectomy not only provides much more accurate but has advantages on inter-lobular and inter-segmental lymphadenectomies. For the concerns of minimal invasiveness and better accessibility for surgeons familiar with single-direction VATS, this article introduces our surgical experience of two micro-portal video-assisted thoracic segmentectomy and lymphadenectomy (3), and the innovative application of the plug-in multi-edge cutting method for inter-segmental plane dealing.

The 58-year-old man presented a 13-mm mixed ground-glass nodule with empty bubbles in the anterior basal segment of the right lower lobe (Figure 1). After the 2-month follow-up of quiescence, the patient was admitted for further treatment. The patient was absent from hypertension, diabetes, tuberculosis, and autoimmune diseases, etc.; no abnormality was found in bronchoscopy, lung function, blood gas analysis, colour Doppler echocardiography, electrocardiogram, and blood tests. There was no sign of metastatic disease preoperatively. All procedures performed in this study were in accordance with the ethical standards of the institutional and/or national research committee(s), and with the Helsinki Declaration (as revised in 2013). Informed consent was obtained from the patient.

Figure 1 A 13-mm mixed ground-glass nodule (red arrows) with empty bubbles was presented at right S8. Axal (A) and coronal (B) views.

Three-dimensional computed tomography bronchography and angiography (3D-CTBA) via a Materialise Mimics 17.0 software was utilized to define the location of the lesion and the anatomy of the relevant bronchial and vascular branches, to conclude bronchus segmentalis and blood vessels that need to be cut, and to formulate the surgical plan (Figure 2). We determined the lesion was located in the anterior basal segment of the right lower lobe and planned to perform two micro-portal video-assisted thoracic segmentectomy at S8 of the right lower lobe with systemic lymphadenectomy (4,5). The surgical procedure is shown below (Video 1).

Figure 2 3D-CTBA reconstruction showed no variations of the trachea, artery and vein and the lesion was located at S8 of the right lower lobe. 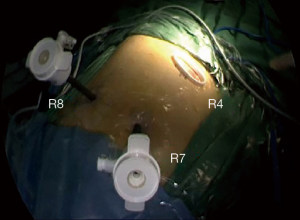 By the 7th intercostal endoscopic exploration (5 mm 30° strabismus chest lens, Figure 4), the lesion was marked at S8 of the right lower lobe according to thin-layer CT anatomical labelling (Figure 5A) (6). The inferior pulmonary ligament was exposed and loosen following the removal of 9th group lymph nodes (Figure 5B); the interlobular fissure was cut and the 11th group lymph nodes were resected afterwards (Figure 5C). A6, A7, A8, and A9-10 being dissected and the 12th group lymph nodes being ablated (Figure 5D), the A8 was confirmed (Figure 5E) and transected via a 3-cm EndoGIA linear white stapler (Covidien, Mansfield, MA, USA). The B8 was cut and sutured with a 6.0 cm purple stapler (Covidien, Mansfield, MA, USA) after exposure (Figure 5F). The lung was reventilated with pure oxygen, and 5 minutes later, a clear inflation-deflation boundary was formed between the still inflated S8 and the collapsed S6, S7 and S9-10 (Figure 5G) and was then marked by electrocautery. The segmental porta was exposed along with the segmental plane and the inter-segment vein (Figure 5H), and V8a was ligatured with the sparing of V8b and V7b (Figure 5I). S8 was then removed via 6.0-cm green staplers (Covidien, Mansfield, (MA, USA) according to the plug-in multi-side cutting method (Figure 5J), and the lesion was confirmed (Figure 5K). The segmentectomy concluded after confirmation of no active bleeding and accuracy of A8, B8, V8a stumps; the adjacent lung tissue is well recruited without shrinkage (Figure 5L). 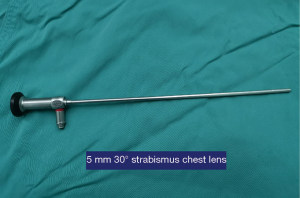 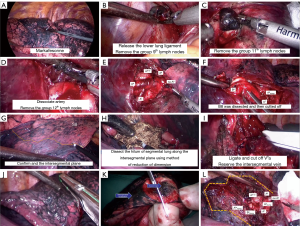 Systemic lymphadenectomy was performed after pathological confirmation of invasive adenocarcinoma. First, the posterior mediastinal pleura was dissected along the oesophagus, right main bronchus and hilar, and the 7th group lymph nodes were removed with the protection of the vagus nerve (Figure 6). Second, the mediastinal pleura was opened along with the azygos vein, and the 2nd and 4th groups of lymph nodes were excised (Figure 7). No air leakage having been confirmed, the margins were applied with absorbable regenerated oxidized fibre membrane to reduce risks of further bleeding and air leakage. 24F chest drainage tubes were placed at the posterior mediastinum from the 8th intercostal space and to the top of the chest cavity at the 7th intercostal space (Figure 8). 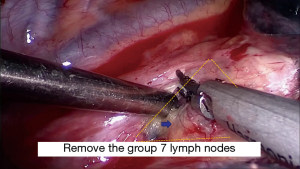 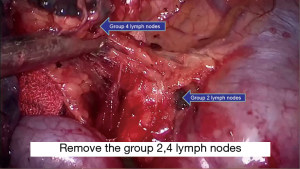 Figure 7 Removal of the 2nd and 4th groups of lymph nodes. 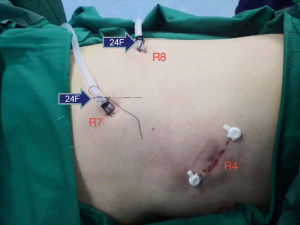 Figure 8 Incisions and chest tubes after surgery. The incision of the fourth intercostal space was about 2 cm.

The operation lasted 120 minutes, the total number of lymph nodes dissected was 13, and the intraoperative blood loss was 150 mL. Postoperative analgesia pump, infection prevention, and phlegm treatment were routinely given; the patient was observed in the intensive care unit for 1 day, the postoperative drainage volume was 150 mL on the first day, 120 mL on the second day, and 30 mL on the third day. No obvious air leakage from the chest tube was found when coughing. The pain scores on days 1–3 were 4, 4, and 3 respectively; chest X-rays showed a good recruitment manoeuvre of the residual right lung, and the drainage tubes were removed on the third day after surgery. The postoperative hospital stay was 4 days, and no complications occurred. The postoperative pathological diagnose was invasive adenocarcinoma in stage pT1aN0M0 of the anterior basal segment of the right lower lobe, mainly LPA (Figure 9). 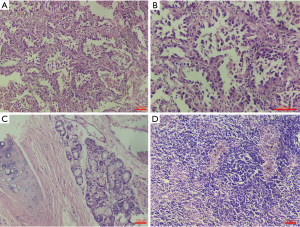 Due to the minimal trauma and technical maturity, VATS is recognized by most experts at home and abroad as one of the standard surgical procedures for early lung cancer (7,8). At present, the most preferential mature incision options for VATS are triple-portal and uniportal mode. The former is beyond the limitation of the operating angle, making it more convenient for resections and more efficient (1). The uniportal VATS only makes one cut in a single intercostal space, so the postoperative incision looks better and the pain is less severe (9); however, for the internal operating angle being limited and higher requirements of instruments, this surgical technique is much more complicated and is not very suitable for beginners (10,11). Our two micro-portal single-direction VATS model may have some unique features as it combines the advantages of the two and avoids their shortcomings. To begin with, the two micro-portal VATS would be more accessible for surgeons who are already familiar with the single-direction VATS, making the learning curve be smoother than that of uniport thoracoscopy. Next, unlike the uniport thoracoscopy, specific instruments are not necessarily required for better operating direction. Moreover, the similar minimal invasiveness and less pain as uniport VATS could be achieved by the two micro-portal VATS; in the present case, overall operation time was 120 minutes and the sum of incisions length was around 4 cm.

We introduced the plug-in multi-side cutting method to deal with the intersegmental plane after recognition via differential inflation. The segmental bronchus and vessels having been well defined, staples were inserted under the intersegmental plane and multiple edges were made along the intersegmental vein and plane until the target segment was resected. In this case, the plug-in multi-side cutting method (Figure 6L) could reduce the occurrence of bronchial injury, thermal injury and segmental portal vein injury, avoid bursting of staples, thus lessening persistent postoperative air leakage, chest haemorrhage, hemoptysis, intractable cough and other symptoms and shortening the hospital stay and accelerating the rehabilitation.

The two micro-portal VATS could optimize the perioperative process by the shorter length of the surgical incision, the single-direction resection “from back down to front up” and the plug-in multi-side cutting method for intersegmental plane management. It contributes to less pain, earlier extubation, and shorter hospital stay; it is in line with the concept of enhanced recovery after surgery (ERAS) (12). In summary, the two-micro-portal VATS is safe, effective, and worth promoting.

We gratefully acknowledge the invaluable cooperation of all the members of the Department of Thoracic Surgery, Tangdu Hospital, The Air Force Medical University, Xi’an, Shaanxi Province, China. The video was awarded second prize in the First International Lung Surgery Competition (2019 Masters of Lung Surgery).

Funding: This work was supported by grant from the Medical Technical Special Foundation of Tangdu Hospital (Grant No. TC201902).

Conflicts of Interest: All authors have completed the ICMJE uniform disclosure form (available at https://ccts.amegroups.com/article/view/10.21037/ccts-20-89/coif). The authors have no conflicts of interest to declare.

Ethical Statement: The authors are accountable for all aspects of the work in ensuring that questions related to the accuracy or integrity of any part of the work are appropriately investigated and resolved. All procedures performed in this study were in accordance with the ethical standards of the institutional and/or national research committee(s), and with the Helsinki Declaration (as revised in 2013). Informed consent was obtained from the patient.