Acquired tracheoesophageal fistula (ATEF) is a rare clinical disease with a high case-fatality rate, which results from an abnormal communication between the trachea and esophagus due to some acquired factors (1-3). With complex and diverse etiologies, the clinical manifestations of ATEF are presented as the respiratory and digestive symptoms. We are reporting a case that a 43-year-old male with ATEF complicated with tracheal stenosis who received multiple treatments due to repeated stent displacement. We present the following case in accordance with the CARE reporting checklist (available at http://dx.doi.org/10.21037/ccts-20-152).

The patient, a 43-year-old male, was admitted to hospital with a history of ATEF for 2 years. He underwent pancreatoduodenectomy for pancreatic cyst 2 years ago and the resected specimens were reported to be benign by postoperative pathology. However, he was transferred to the intensive care unit (ICU) receiving tracheal intubation and mechanical ventilation for 20 days due to serious dyspnea following the pancreatoduodenectomy. One month after being discharged from hospital, the patient suffered from shortness of breath, dyspnea, nausea and vomiting with no obvious inducement. After hospitalization, the patient was diagnosed to suffer ATEF and received tracheal stent implantation and the fistula repair with endoscope. Then, he was discharged from hospital after the symptoms improved. However, in recent 2 years, the patient received the adjustment of implanted tracheal stent in hospital several times due to the stent displacement, and the digestive and respiratory symptoms still remained recurring.

The relevant auxiliary examinations were performed after admission. Chest computed tomography (CT) examination and three-dimensional reconstruction of trachea both showed the changes with tracheal stent implantation, and the existence of ATEF complicated with trachea stenosis (Figure 1). Fiberoptic bronchoscope showed that there existed ATEF whose size was 1.0 cm × 1.5 cm (Figure 2). After preoperative evaluation based on relevant examination, the degree of trachea stenosis in the case was evaluated to be between 2/3 and 3/4, which indicated that the internal diameter of the narrow trachea was just 1/4 to 1/3 of the internal diameter of normal tracheas. Consequently, the patient was considered to require tracheal reconstruction. 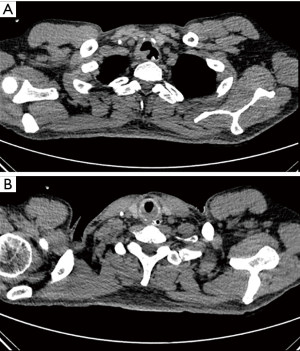 Figure 1 Preoperative chest CT scan of the patient. (A) The image showed there was a tracheoesophageal fistula; (B) the image showed that thyroid cartilage intima had proliferated and thickened seriously, which resulted in the tracheal stenosis. 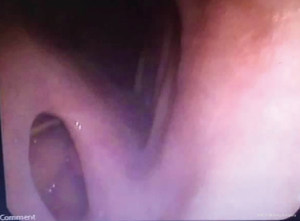 In the preoperative period of our surgery, the dyspnea of the patient was so severe that the patient could not lie down and fall asleep for more than 2 hours at night in 20 days. Finally, based on the relevant examination and the patient’s condition, one-stage surgical treatment was decided. Endoscopic liner cutter staplers were applied to close the fistula and resect the narrow trachea directly, then tracheal reconstruction was conducted.

All procedures performed in studies involving human participants were in accordance with the ethical standards of the institutional and/or national research committee(s) and with the Helsinki Declaration (as revised in 2013). Written informed consent was obtained from the patient for publication of this study and any accompanying images.

Findings in the surgery

The length of subglottic stenosis reached 3 cm and the thyroid cartilage intima had proliferated and thickened seriously (Figure 3). The tracheal stent had moved down and obstructed unilateral main bronchi, and the ventilation function of the obstructed main bronchi totally depended on the fistula. The fistula with a size of 1.0 cm × 1.5 cm was observed to be 2 cm away from thyroid cartilage. There existed serious adhesion, degeneration and fusion between the esophagus and trachea at the upper edge of the fistula. 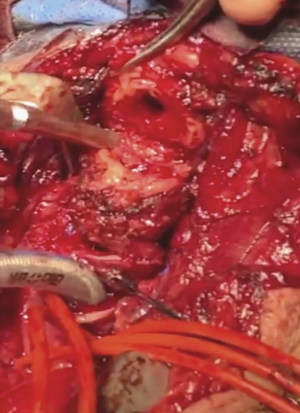 Figure 3 The cricoid cartilage intima had proliferated and thickened seriously, resulting in the tracheal stenosis.

Steps of the surgery

After the median incision of the upper one third of the sternum, the rest of sternum was cleaved obliquely to the right side Then the esophagus and trachea were exposed well after dissection. And it was observed that there existed serious adhesion and the abnormal structure between the esophagus and trachea at the upper edge of the fistula, which caused that it was difficult to separate away the esophagus and trachea in the dissection. Therefore, part of thyroid cartilage and thyroid cartilage intima were resected, and the cartilage rings of the narrow trachea were cut open from the front side to expand it for the expose of the fistula filed. Then the narrow trachea as well as the nearby esophagus were lifted in order to create the space for the application of endoscopic liner cutter staplers. However, the distance and space near the fistula were still not enough for endoscopic liner cutter staplers. Consequently, after adjusting the angle of placement, endoscopic liner cutter staplers were used to close the fistula with its nearby thickened tissues and cut the narrow trachea away (Figure 4). Finally, the mattress suture was applied to strengthen stapling of the fistula with VCP771D 4-0 (Figure 5). 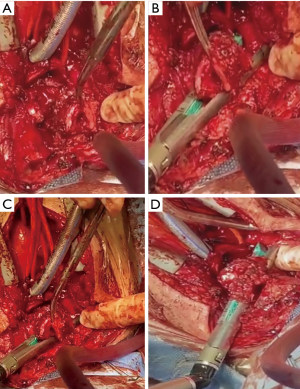 Figure 4 The narrow trachea as well as the nearby esophagus were lifted and endoscopic liner cutter staplers were used to close the fistula with its nearby thickened tissues. 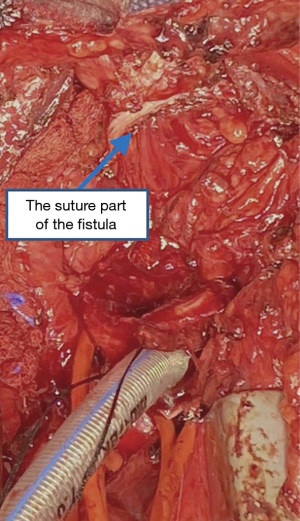 Figure 5 After the closure of the fistula, mattress suture was applied to strengthen the stapling of the fistula with VCP771D 4-0.

In this case, there existed thickened thyroid cartilage intima and subglottic stenosis. Therefore, the thickened thyroid cartilage intima was cut away in the reconstruction of airway. And the internal diameter of thyroid cartilage was dilated slowly and vigorously with hemostatic forceps in order to be anastomosed with the lower incisal edge of the trachea, whose structure was normal. After the completion of the reconstruction of airway, a pedicled thymus flap was used to surround the anastomosis in order to isolate the reconstructed trachea from the esophagus. In this way, the sutured part of the fistula could be covered firmly as well, which reduced the postoperative recurrence risk of ATEF.

The surgery was successful. The fistula was closed firmly through endoscopic liner cutter staplers. After the resection of the narrow trachea, the trachea and thyroid cartilage were anastomosed satisfactorily and the airway was reconstructed successfully. Finally, a tracheal cannula was applied for assisted ventilation.

The patient recovered well without dyspnea, shortness of breath, cough, expectoration and other discomfort after the surgery. Fiberoptic bronchoscope was conducted 1 month later and showed normal postoperative changes of ATEF and no recurrence of ATEF (Figure 6); After 3 months, the chest CT and three-dimensional reconstruction of trachea were both conducted and showed slight stenosis above the tracheal anastomosis and no recurrence of ATEF (Figure 7). 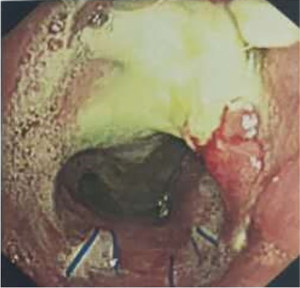 Figure 6 The fiberoptic bronchoscopy of 1 month after surgery showed that there existed some exposed blue surgical line and no recurrence of ATEF; a small amount of white necrosis and granulation tissues were found on the front wall above the trachea incision. ATEF, acquired tracheoesophageal fistula.

Figure 7 Postoperative chest CT scan of 3 months after surgery. (A) The image showed there was no recurrence of ATEF; (B) the image showed the inner diameter of thyroid cartilage was larger than before and there existed slight tracheal stenosis. ATEF, acquired tracheoesophageal fistula.

Surgical treatment is considered to be the first choice for ATEF. However, the recurrence rate remains high and it is very difficult to perform reoperation. Typically, the segmental resection and reconstruction of tracheas combined with double-layer suture of the esophageal defect is the standard surgery for ATEF with a diameter lager than 1 cm (4). For ATEF with a diameter less than 1 cm, the surgery that incise the fistula and repair trachea and esophagus respectively is often adopted to keep the integrity of respiratory and digestive tract. In addition, other surgical methods, such as the “double patch” technique proposed by Yang et al. (5,6), are also feasible, but the tracheal and esophageal reconstruction is required.

In the reconstruction of the patient’s airway, the management of the thickening parts and stenosis of thyroid cartilage intima was just trimmed instead of being resected totally. Moreover, the postoperative patency of the airway depended on the situation of pathological changes of trachea. Therefore, the tracheal stenosis might reoccur after the airway reconstruction. In case that laryngeal edema or bilateral recurrent laryngeal nerve injury might occur after the operation and result in dyspnea, it was necessary to apply a tracheal cannula for assisted ventilation.

For this patient with ATEF complicated with tracheal stenosis, it was difficult to separate away the trachea and esophagus near the upper edge of the fistula in the dissection. Therefore, the cartilage rings of the narrow trachea were cut open from the front side and the narrow trachea as well as the nearby esophagus were lifted in order to create the enough space for application of endoscopic liner cutter staplers. After adjusting the angle of placement, endoscopic liner cutter staplers were used to close the fistula with the its nearby thickened tissues, and cut the narrow trachea away. Finally, after resection of the narrow trachea, the trachea and thyroid cartilage were anastomosed to reconstruct the airway. A tracheal cannula was applied for assisted ventilation finally. Our surgical method was proved to be simple and effective in the postoperative follow-up of the patient.

Reporting Checklist: The authors have completed the CARE reporting checklist Available at http://dx.doi.org/10.21037/ccts-20-152

Conflicts of Interest: All authors have completed the ICMJE uniform disclosure form (available at http://dx.doi.org/10.21037/ccts-20-152). The series “Tracheoesophageal Fistula” was commissioned by the editorial office without any funding or sponsorship. The authors have no other conflicts of interest to declare.

Ethical Statement: The authors are accountable for all aspects of the work in ensuring that questions related to the accuracy or integrity of any part of the work are appropriately investigated and resolved. All procedures performed in studies involving human participants were in accordance with the ethical standards of the institutional and/or national research committee(s) and with the Helsinki Declaration (as revised in 2013). Written informed consent was obtained from the patient for publication of this study and any accompanying images.