Lobectomy is the standard treatment for early-stage non-small cell lung cancer. However, some studies have shown that segmentectomy can yield the same benefits in the treatment of early-stage lung cancer, especially for noninvasive group (1). In recent years, uniportal video-assisted thoracoscopic surgery (VATS) has been widely used in treatment of early-stage non-small cell lung cancer (NSCLC) after first reported by Gonzalez-Rivas (2). Here, a uniportal VATS of S3 segmentectomy without dissection of mediastinal lymph nodes is presented. All procedures performed in this study were in accordance with the ethical standards of the institutional and/or national research committee(s), and with the Helsinki Declaration (as revised in 2013). Informed consent was obtained from the patient.

An enhanced chest computed tomography (CT) scan was completed before operation, which showed a lesion in the left upper lobe. The lesion was presented as a mixed ground glass opacity (mGGO) with a size of 12 mm and a maximum CT value of −450 HU. The consolidation to tumor ratio (C/T) was 0.25 to 0.5, which suggested that the lesion was a noninvasive adenocarcinoma according to the clinical research of JCOG1211 (3). Further, we confirmed that the lesion was located in anterior segment of left upper lobe by the three-dimensional reconstruction technique, and the lesion had a safe distance to the resection margin in the preoperative planning. Base on the above conditions, a uniportal VATS of S3 segmental resection was performed (Video 1). The procedure was performed under general anesthesia with double lumen intubation, and the patient was placed in lateral decubitus position. A 3-cm incision was made at the 4th intercostal between the left anterior axillary line and the mid-axillary line. A 10-mm camera of 30 degree should be placed to be close to the edge of the incision.

Firstly, mediastinal pleura neared by the left hilum of lung was opened by Harmonic, and the left superior pulmonary vein was exposed (Figure 1). And then, the sheath of left superior vein was removed to exposing the various branches of the vein (Figure 2). According to the reconstruction model, we determined the attribution of each branch of veins, and branch of V3c was the vein that we needed to cut off. The V3c was clipped with Hemolok and cut off with Harmonic. Secondly, the 12th lymph nodes were dissected in order to expose the bronchus (B1+2+3) and A3 (Figure 3). The lung tissue was flipped over and the branch of A1+2(a+b) was dissociated (Figure 4). Then A3 artery was disconnected by stapler when the branch of A3 was identified. Afterwards, the branch of B3 was dissociated by Harmonic and disconnected by stapler. At last, the S3 intersegment plane was demarcated by inflation-deflation and divided with staplers (Figure 5). The lung was removed without mediastinal lymph nodes dissection. 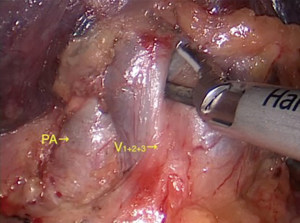 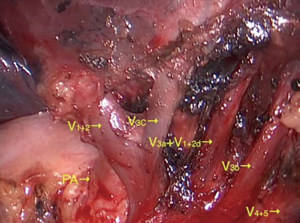 Figure 2 The sheath of left superior vein was removed. 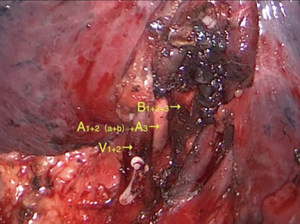 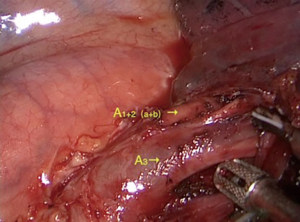 Figure 4 The lung tissue was flipped over and the branch of A1+2(a+b) was exposed. 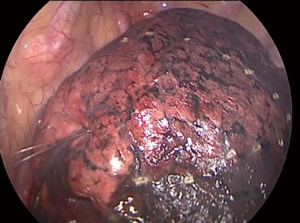 The left upper pulmonary resection is more difficult than any other procedures due to the more variable of vessels of left lobe. In this being, the segmentectomy (S3) of left upper lobe is one of the most difficult operations of all pulmonary segments, especially in the condition of uniportal VATS. In this procedure, the most important thing is preserving the function of the adjacent lung segments (S4+5 and S1+2). To do this, we need to deal with the V3c very carefully and preserve the V3b and V1+2a quite well. The blood vessels of V3b and V1+2 a as markers are used to identify the demarcation of S3. The three-dimensional reconstruction before operation is of great significance in segmentectomy (4), which can facilitate the identification of the hilar structures. This preoperation planning improves the accuracy of the anatomical resection. In the video, there is a fact that the dissection of group 12 lymph nodes is critical to exposing the branch of A3 and target bronchus. Actually, segmental lymph node is so fragile that rupture happens all the time during the free process. We need to pay more attention to lymph nodes dissection in segmentectomy. After that, we find A3 partly at the dorsal side of V1+2, which is limited by the field of view in uniportal operation. So, the lung tissue is flipped over and the branch of A3 is exposed clearly. It is worth noting that the variation of A4+5 or A5 (mediastinal lingual artery) may be encountered between V3c and B3. The branch of A3 artery can be disconnected by stapler when the absence of mediastinal lingual artery is confirmed. Now, the accompanying branch of bronchus (B3) is obvious and disconnected by stapler. In generally, disconnection of B3 in left S3 segmentectomy is challenging because of the avoidance of A1+2 injury. In our medical center, the branch of B3 is spaced out by silk thread in the procedure. Of course, in few cases, the A1+2 is not completely hidden behind B3 due to variation. In this condition, we can insert the stapler directly and cut off the targeted bronchi. Then, we can remove the target lung tissue by staplers. Notably, inflation-deflation is mandatory before S3 segment is divided with staplers, which is a conventional method to demarcate the intersegmental planes. However, the inflation-deflation needs a long time to demarcate the intersegmental planes in operation. Moreover, this method is limited in chronic obstructive pulmonary disease (COPD) patients because of the poor diffusion function. In addition, this method may increase the difficulty of locating the lesion after resection, if there are a few solid components in the lesion. Recently, a novel method of intravenous injection of indocyanine green (ICG) has been used in segmentectomy (5), which could demarcate the intersegmental planes immediately. Further studies of ICG in segmentectomy setting will be necessary to prove feasibility.

In the uniportal procedure, the most difficulty is the interference of surgical instruments. Our experience suggests that the using of Harmonic can alleviate this problem. During the operation, Harmonic can play a number of roles other than as an energy instrument, which means less number of surgical instruments entering the chest cavity is needed and leads to less interference between the instruments. On one hand, the use of Harmonic in operation is safer than other energy instruments. On the other hand, Harmonic has a unique advantage of dealing with small blood vessels, which can cut off the small blood vessels and keep the surgical field of vision clear. In view of the above-mentioned advantages, Harmonic is widely used in thoracoscopic surgery in our medical center, especially in uniportal procedure.

Conflicts of Interest: All authors have completed the ICMJE uniform disclosure form (available at https://ccts.amegroups.com/article/view/10.21037/ccts-20-80/coif). The authors have no conflicts of interest to declare.

Ethical Statement: The authors are accountable for all aspects of the work in ensuring that questions related to the accuracy or integrity of any part of the work are appropriately investigated and resolved. All procedures performed in this study were in accordance with the ethical standards of the institutional and/or national research committee(s), and with the Helsinki Declaration (as revised in 2013). Informed consent was obtained from the patient.