A novel technique of oblique resection and reconstruction in a post-tracheotomy tracheoesophageal fistula: a case report

Surgical treatment of tracheoesophageal fistulae (TEF) is very challenging. Since the etiologies are not identical, the procedure needs to be adapted accordingly. In 1967, case reports from Malmejac, Toty, and Nicolas described early explorations in the etiology of post-tracheostomy TEF respectively (1-3). Typically, the formation of the fistula results from the sandwiching effect of the cuff of the tracheotomy tube anteriorly and the nasogastric tube posteriorly. Fistulae formed in this way are located on a different transverse plane from that of the tracheostomy stoma, with the stoma located superiorly, and the fistula inferiorly. By the standards of conventional procedures, the extent of resection should at least encompass both the fistula and the stoma. As a result, the remaining segments of the trachea become too short for a tension-free anastomosis. In this circumstance, an anastomosis with excessive tension could result in anastomotic dehiscence in the short-term and tracheal malacia or stenosis in the long-term. How to develop a new surgical technique that minimizes the anastomotic tension remains a challenge and warrants ongoing investigation. We present the following article in accordance with the CARE reporting checklist (available at http://dx.doi.org/10.21037/ccts-20-156).

A female patient aged 41 presented comatose to a local hospital after a motor vehicle accident. The emergency workup confirmed cranial trauma with intracranial hemorrhage and multiple contusions all over the body. After an emergency decompressive craniotomy, she was still in coma and unable to re-establish spontaneous breathing, leading to a prolonged intubation in the intensive care unit. A nasojejunal tube was thus placed to allow for enteral feeding. One week after intubation, the patient was stabilized and was switched from oral ventilation to ventilation via tracheotomy. Another 1 week after tracheostomy, increased amount of gas was noted in the gastric drainage and yellowish enteric contents were found in the tracheal aspirate. Based on these findings, a TEF was suspected and later confirmed by bronchoscopy. Therefore, a decision was made to replace the original tracheotomy tube with a 7.5 mm endotracheal tube via the stoma entrance. The tube was introduced until the cuff exceeded the fistula so as to avoid further leakage. With this management, the patient slowly gained consciousness and was then referred to our hospital for further treatment.

Upon admission, a cervico-thoracic computed tomography (CT) was ordered which indicated the presence of a TEF. The location and size of the fistula was further examined through additional bronchoscopy and esophagogastroscopy (Figure 1). After routine preoperative workup excluded contraindications, the patient was prepared for surgery.

During the entire treatment process, the patient uses ventilator to assist breathing when unconscious, and then gradually weaned off after being awake. The purpose of indwelling the tracheal tube is to prevent digestive juice from entering the airway through the fistula. After the operation, the tracheal intubation was pulled out in the operating room. The patient has no ventilator dependence during treatment.

During operation, a horizontal cervical incision was made at the level of the tracheotomy stoma, in additional to a routine median sternotomy over the upper sternum. During the phase of dissection, a pedicled flap of left platysma muscles was preserved for later use. The surrounding scar tissue at the stoma site was first excised for adequate exposure of the trachea. Then, the dissection of the trachea started at this point and was carried both cephalad and caudad until the whole length of the fistula was fully exposed. Since the tracheal segment affected by the fistula was too long (the length is about 5 cm), a routine tracheal segment resection and reconstruction would result in excessive tension. To avoid excessive tension over the tracheal anastomosis, an oblique segment of the trachea was resected. Two oblique cut lines parallel to each other were drawn between the tracheostomy stoma anteriorly and the fistula posteriorly. Both the stoma and the fistula were included in this oblique segment of trachea to be resected. The fistula on the esophagus was exposed by trimming tissue adjacent to the membranous trachea and the fistula. The esophageal fistula was closed with two layers of interrupted 4-0 Vicryl sutures. The left platysma muscles prepared beforehand was placed between the tracheal anastomosis and the fistula closure on the esophagus. After the resected segment of trachea was removed, an end-to-end anastomosis with interrupted 4-0 Vicryl sutures was made to reconstruct the trachea. For posterior sutures, the knots were tied inside the lumen, while figure-of-eight sutures were placed in the anterior wall and knots tied outside of the lumen. Specifically, two horizontal mattress sutures were added to relieve tension in the area of cartilaginous-membranous junction. Through this method of reconstructing the trachea, we actually only cut about 2 cm of tracheal segment. Schematic diagrams are shown in Figure 2. Before closing, two 18Fr draining tubes were placed on both sides of the anastomosis on 10 cm H2O suction. 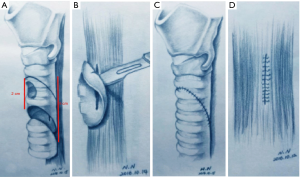 Two months postoperatively, the follow-up CT demonstrated an intact trachea without any signs of malacia or stenosis. The anastomosis was satisfactory under bronchoscopy (Figure 3). At the most recent follow-up 1 year after surgery, the patient reported good recovery. 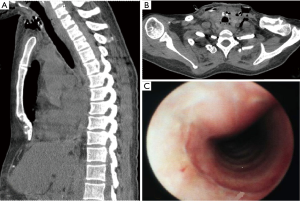 Figure 3 Images of follow-up CT and bronchoscopy. Follow-up CT demonstrated an intact trachea without any signs of malacia or stenosis (A,B); the anastomosis was with good healing under bronchoscopy (C). CT, computed tomography.

Iatrogenic TEF following tracheotomy have unique etiologies: the fistulae are mostly caused by sandwiching between the endotracheal cuff and the gastric tube. With the increased use of decompressive endotracheal cuff and improved awareness of the etiologies, the incidence of this type of fistula declines markedly. The conventional cuff of a tracheotomy tube features a long oval shape. By this structure, the compression is unevenly distributed and is usually aggregated at the far end of the long axis, producing a continuous high pressure that will in turn cause a focal ischemia, predisposing the affected trachea and esophagus to a future fistula. Prevention of this iatrogenic fistula can be achieved by monitoring the cuff pressure, removal of gastric tube and upgrade to a decompressive cuff. If a fistula is identified early in its course, the abovementioned prophylactic measures can also be used for conservative treatment of this disease, which may be enough for spontaneous healing of some lesions. In other fistulae where the diagnosis is delayed and a leakage of enteric fluid is present, conservative management is often ineffective and surgery is indicated (4).

There are differences in the anatomy of esophageal fistulae secondary to tracheotomy and to intubation. The incision of tracheotomy is usually located at the frontal trachea right beneath the cricoid cartilage. This adds a tracheal defect at a different level with the fistula, with the latter often being 2–3 cm inferior, at the membranous trachea where the cuff pressure is highest. Conventional surgical techniques require that the entire length of tracheal segment from the fistula to the stoma be resected. In this way, a direct single-stage end-to-end anastomosis is difficult to accomplish due to a long segment resection, and other reconstruction methods need to be considered (5). Previously, it was reported in a pediatric tracheal resection, the technique of oblique resection and reconstruction was utilized to alleviate anastomotic tension and prevent long-term stenosis. Inspired by this, we expanded the usage of this technique in a case of post-tracheotomy TEF, in order to minimize the resection, preserve more tissue, reduce anastomotic tension, and prevent long-term malacia and stenosis. The key of this technique is drawing two transection lines with the upper one connecting the upper rims of the stoma and the fistula, and the lower one connecting the lower rims respectively. If the stoma and the fistula are similar in length, a tension-free anastomosis can be easily achieved. However, if the fistula is longer than the stoma, adjustment could be made such that part of the membranous trachea at the fistula is sutured to allow for good approximation (6).

Because TEF is a benign condition, surgical margin is not a concern, and normal tracheal tissue could be salvaged with every effort except that the scar tissue requires radical resection. Anatomically, the tracheotomy stoma is located in the cartilaginous trachea in the anterior, and the TEF is located in the membranous trachea in the posterior. To preserve adequate tracheal tissue and minimize anastomotic tension, we re-innovated the technique of oblique resection and reconstruction which features transection along the lines with the upper one connecting the upper rims of the stoma and the fistula, and the lower one connecting the lower rims respectively.

We believe this technique will effectively prevent anastomotic complications postoperatively and recommend its use in cases of post-tracheotomy iatrogenic TEF.

Reporting Checklist: The authors have completed the CARE reporting checklist. Available at http://dx.doi.org/10.21037/ccts-20-156

Conflicts of Interest: All authors have completed the ICMJE uniform disclosure form (available at http://dx.doi.org/10.21037/ccts-20-156). The series “Tracheoesophageal Fistula” was commissioned by the editorial office without any funding or sponsorship. The authors have no other conflicts of interest to declare.