Tracheoesophageal fistula (TEF) is a common congenital anomaly of the respiratory tract, with an incidence of 1 in 3,500 to 1 in 4,500 live births (1). Though it is typically associated to other congenital abnormalities like cardiac defect, oesophageal atresia (EA) and more complex syndromes (Table 1), the isolated TEF accounts for 4% of cases (2). The defective lateral septation of the foregut into the oesophagus and trachea during the embryonic period is the most commonly accepted pathogenic hypothesis, that is also considered to explain the aetiology of other airways or digestive malformations (laryngo-tracheoesophageal cleft, tracheal atresia or isolated oesophageal stenosis) (3). The detection of polyhydramnios—occurring in approximately two-thirds of pregnancies complicated by EA—should rise the suspicion of foregut abnormalities. However, many cases are not detected prenatally, and diagnosis is not made until symptoms onset (4).

The clinical presentation of TEF varies according to the presence or absence of EA. Infants with TEF and EA usually become symptomatic immediately after birth, with drooling, choking and respiratory distress during swallowing. In addition, the air passing through the fistula leads to gastric distension and subsequent reflux of gastric contents through the same TEF, resulting in aspiration pneumonia. Instead, patients with isolated TEF, also defined H-type, may become early symptomatic at the time of feeding if the defect is large, or exhibit belatedly symptoms if the defects is small (5).

The detection of a gas-filled gastrointestinal tract on chest radiographs should rise the suspect of distal TEF, whereas a contrast radiography could be useful for proximal TEF or cases of uncertain diagnosis (5). As the fistulous tract may be missed in the above-mentioned studies, the diagnosis of H-type TEF is more challenging. In that case, the injection of a small amount of methylene blue during the execution of combined endoscopy (oesophageal and airways endoscopy) may be used to detect the TEF. The three-dimensional CT scanning with airway reconstruction is an additional modality for the diagnosis of TEF, if it has not been adequately identified on contrast studies (6).

Treatment of TEF consists of (I) surgical separation of the trachea and oesophagus by ligation of the fistula, (II) or endoscopic repair with tissue or fibrin adhesive (7,8).

The prognosis for isolated TEF is generally good, while it is variable for the fistula’s types associated to other anomalies. Despite the advances in surgical management of TEF, a considerable number of children experience short and long-term respiratory complications, which can significantly affect their quality of life (9). This review focuses on the underlying mechanisms and clinical presentation of respiratory complications occurring in children with TEF.

Respiratory morbidity in patients with TEF—with or without EA—recognizes a multifactorial aetiology, summarized in Figure 1.

Short-term pulmonary complications occur in the early post-operative period. In patients with isolated TEF, the recurrence of fistula causes chronic cough, choking, cyanosis with feeding, dyspnoea, wheezing, and recurrent pneumonia. Sometimes, symptoms onset can be delayed with consequent lung damage determined by recurrent aspiration phenomena through the fistulous tract (14). Currently, it is not known whether risk factors for TEF recurrence exist. Nevertheless, flexible airway endoscopy should be considered in presence of clinical suspicion.

Recurrent TEF (Figure 2) is also reported in 5–10% of EA affected children, both in the short and long term (15). In addition, in patients with TEF and associated EA, short-term respiratory complications occur because of anastomosis leak or oesophageal stenosis. In these situations, aspiration pneumonia, atelectasis, pneumothorax and pleural effusion are the most frequent complications (14). Chest radiography with contrast enhancement can be useful for clinician to make diagnosis. 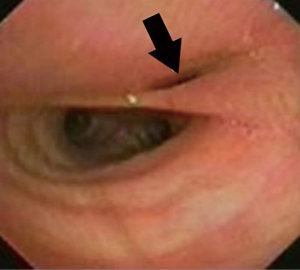 Long-term respiratory morbidity is primarily associated with the residual tracheobronchomalacia, impaired muco-clearance and airways hyper-reactivity. Other factors, both involving airways and digestive tract, may contribute to the appearance of respiratory symptoms that usually occur in paediatric age, but can persist into adolescence and adulthood also. Indeed, recurrent wheezing, respiratory tract infections, asthma clinician-diagnosed and persistent cough are the most common symptoms reported in a systematic review carried out in adults underwent to EA (with or without TEF) repair during infancy (16).

Patients with recurrent respiratory symptoms should be carefully evaluated for congenital or acquired anatomic and functional airway and digestive abnormalities, which contribute to significantly impact the respiratory morbidity in this group of children (17).

Vocal cord paralysis is a condition difficult to diagnosis in infants. Even though it can be congenital, it is more frequently associated to recurrent laryngeal nerve injury associated with TEF repair. Therefore, all newborns with TEF should be examined before TEF correction to confirm the mobility of the vocal folds and to rule out other congenital associated airway malformations (18). The development of stridor, hoarseness or cough during feeding should arise the suspicion of impaired vocal fold mobility and otolaryngology examination with flexible or rigid laryngo-tracheobronchoscopy should be made.

Several studies reported an incidence rate of vocal cord paresis or paralysis (VCP) ranged 3 to 7% (12,19,20). A retrospective review of patients with EA and/or TEF was made from 1985 to 2009. Post-operative vocal fold impairment was detected in 3% of patient; bilateral and unilateral VCP were respectively found in 3 and 2 patients on fibreoptic laryngoscopy (19). A 5-year retrospective cohort study, involving 11 children’s hospitals, enrolled 396 cases of EA and TEF affected patients. Postoperative morbidity occurred in 62% of the population and VCP was observed in 26 cases (7%) (20). Another 5 years retrospective study reported an incidence of 5.7% of VCP in patients followed in one centre (12).

The surgical approach appears to influence the development of VCP as reported by Woo and colleagues, describing the higher rates of VCP in children underwent to thoracoscopic repair of EA (21).

Tracheomalacia (TM) is a frequent complication of surgical repair of EA and TEF, developing in 30 to 40 percent of cases. It is due to the antero-posterior collapse of the cartilaginous wall and is considered as the main condition that causes or predisposes to almost all respiratory complications.

Signs and symptoms depend upon the location and severity of the tracheal collapse. Stridor is usually present in extra thoracic lesions, whereas recurrent harsh, barking, or croup-like cough are typical of intrathoracic lesions (11).

Stridor and cyanotic spells often occur in infancy; differently, brassy cough and wheeze are the main symptoms reported in childhood and adolescence. As the “wheeze” is not determined by the bronchospasm, it does not respond to bronchodilators, except for cases with associated bronchial hyperactivity.

Recurrent lower respiratory infections are often reported in children with history of EA and/or TEF (9). It is well known that there is an association between tracheomalacia and protracted bacterial bronchitis (PBB): ineffective cough and poor mucus clearance due to airway collapse are considered the possible mechanisms underlying the PBB (22).

Symptoms tend to improve by age, when the natural maturation of cartilage occurs and airway calibre increases. However, the complete symptoms resolution is not expected as shown by the presence of asthma and exercise intolerance, wheeze or persistent cough in 22%, 35% and 15% of adults respectively (16).

Flexible bronchoscopy during spontaneous breathing is the gold standard to made diagnosis of TM, as the trachea is observed to collapse during the expiration phase (Figure 3). Moreover, dynamic chest CT scan is a non-invasive tool able to diagnose TM through the acquisition of end-expiratory and end-inspiratory images (23).

Figure 3 Bronchoscopy appearance of tracheomalacia (A) and right bronchomalacia (B) is indicated by black narrow.

Positive expiratory pressure (PEP) applied with low resistances and through face mask, can be used to reduce mucus plugging and improve mucus expectoration (24). Bronchodilator and inhaler corticosteroids must be considered when bronchial hyperresponsiveness is suspected (25-27). Non-invasive ventilation or surgical intervention may be needed in children with life-threatening episodes of airway obstruction, recurrent infections and respiratory failures, or failure to thrive (28-30). 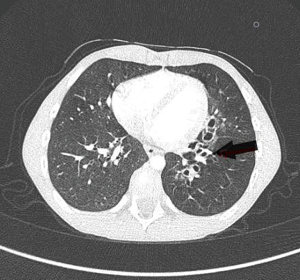 The chest wall (bony structures, respiratory muscles and nerves) is a critical component of the respiratory pump. Congenital chest wall abnormalities may be associated to EA and TEF or isolated TEF, as part of syndromic picture (VACTERL association) (35). In addition, acquired chest wall deformities due to surgical trauma (i.e., scoliosis or postoperative ribs fusion) may be a significant contributor to the restrictive ventilator pattern. Indeed, the last one is described in up to 96% of children, adolescents, and adults previously treated for EA with or without TEF, showing a clear prevalence over obstructive or restrictive-obstructive ventilator pattern (36).

It is a frequent long-term complication of children underwent to surgical repair of EA/TEF (37). Dysphagia affects up to 50% of paediatric patients and is reported as one of persisting symptoms into adulthood. The presence of associated structural airway abnormalities (laryngeal clefts, laryngomalacia, vocal cord paralysis, and tracheomalacia) seems to be more associated to oropharyngeal aspiration. Therefore, this group of children is more likely to require tube feeding, both at discharge (79.6% of patients) and at the age of 1 year of life (52.7%) (38).

It is one of the most important problems affecting 35% to 58% of children with EA/TEF history, with persisting symptoms into 46% of adults (13). The delay gastric emptying due to gastrointestinal dysmotility and structural factors such as oesophageal anastomotic stricture promote the development of GER that can contribute to alter the airway oxidative balance indirectly and sustain airway reactivity (39-42).

GER can cause chronic laryngeal irritation that may manifest itself as recurrent stridor and/or chronic hoarseness (43). In addition, it can be associated to upper respiratory tract infection (40.34%), asthma (24.48%) and aspiration pneumonia (33.45%) (37). Acid suppression can be useful to ameliorate associated respiratory symptoms in patients with documented GER, but it can’t be considered the only effective treatment (13).

Atopy can be defined as an individual’s predisposition of developing an IgE and eosinophilic-mediated disease. Together with other conditions (smoking habits, environmental pollution), atopy can play a role in the recurrence of respiratory infections. Several Authors investigated the role of atopy in the respiratory disease in EA and/or TEF affected patients, suggesting an unusual high prevalence of atopy in this group of patients (44-46). Many studies reported cutaneous sensitization to common allergens ranging 37% to 54% in children and adolescents affected with EA and/or TEF. Multiple sensitizations seemed to be associated with recurrent respiratory symptoms, like in general population (43,44). Similar studies carried on adult population with history of EA surgically corrected, found high specific IgE titres (46). Anyway, even though the dysregulation of the respiratory epithelial barrier has been suggested as the cause of allergen sensitization in these patients, the increased prevalence of atopy or allergies is still controversial, and its role seems to be independent by the underlying airway and foregut malformations.

Therapeutic interventions in children with TEF and recurrent respiratory symptoms

*, other specific treatments must be considered: (I) palivizumab administration [in Italian patients aged under 1 year (according to the law 648/96, determine 1,234/2,016 at Sep 15, 2016)]; (II) annual flu vaccination; (III) proton pump inhibitor trial (if gastroesophageal reflux plays a role in the worsening of respiratory symptoms). TEF, tracheoesophageal fistula.

As respiratory morbidity may recognize multiple aetiologies in TEF affected children, patients need to be evaluated by a multidisciplinary team, including pulmonology, otolaryngology, gastroenterology and speech pathology. Respiratory problems are more frequent during childhood, but several studies have shown that chronic cough and asthma on exertion are also present into adulthood. Given respiratory symptoms and possible long-term complications, transition of care from paediatric to adult services is imperative.

Provenance and Peer Review: This article was commissioned by the Guest Editor (Tutku Soyer) for the series “Tracheoesophageal Fistula” published in Current Challenges in Thoracic Surgery. The article has undergone external peer review.

Conflicts of Interest: Both authors have completed the ICMJE uniform disclosure form (available at https://ccts.amegroups.com/article/view/10.21037/ccts-20-140/coif). The series “Tracheoesophageal Fistula” was commissioned by the editorial office without any funding or sponsorship. The authors have no other conflicts of interest to declare.