The first LT was performed in June 1963 by Hardy of the University of Mississippi (1), and LT has since become the main treatment for end-stage lung disease. The International Society for Heart and Lung Transplantation (ISHLT) reported 4,452 LTs performed in 2017, globally (2). In Korea, the first LT was performed in 1996 (3) at Severance Hospital; the patient underwent a single lung transplant to treat pulmonary fibrosis, but died 82 days later because of infection (3). The number of LTs did not increase significantly thereafter. However, in 2011, the number of LTs increased to 35, which was nearly double the number of cases (n=18) reported in 2010 (4) (Figure 1). This was due to a national outbreak of acute respiratory distress caused by humidifier disinfectant-associated interstitial lung disease (ILD). In February 2011, several young patients were hospitalized in the intensive care units (ICUs) for respiratory distress with no obvious cause. Following an investigation by the Korean Center for Disease Control and Korea Research Group for Respiratory Failure, a humidifier disinfectant was identified as the causative factor. Hong et al. (5) studied 17 patients with humidifier disinfectant-induced acute respiratory distress. Ten patients were admitted to the ICU for mechanical ventilation. Overall, four patients underwent LT, and five of the remaining six patients who did not undergo LT died. Since this incident in 2011, the number of LTs increased rapidly, up to 157 cases a year by 2019 (Figure 1). 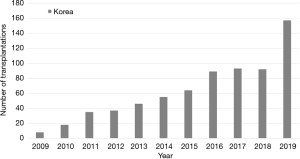 The transplantation law was enacted in 1999 by the National Assembly of the Republic of Korea. The Korean Network for Organ Sharing (KONOS) was founded in 2010, following the enactment of the transplantation law, to manage organ donation. Since its foundation, the KONOS manages organ donations from 36 organ procurement organizations, and not only distributes the organs of deceased donors, but also publishes annual statistics of nationwide organ transplantation.

In 2017, the first living-donor lobar LT (LDLLT) was performed at Asan Medical Center (AMC) (6) in a 19-year-old female patient with idiopathic pulmonary artery hypertension who developed progressive heart failure. Her condition deteriorated rapidly, but no deceased donor could be found. LDLLT was performed, although the transplantation law did not allow living-donor lung harvest at the time. The patient continued to remain well 2 years after the surgery. The transplantation law was subsequently amended in December 2018 to allow lung donation from living donors.

Characteristics of LT in Korea

Demographics of LT recipients from KONOS

The proportion of LT recipients who require mechanical ventilation or extracorporeal membrane oxygenation (ECMO) support is very high. In Korea, 46.2% of the LT recipients were supported by ECMO and/or mechanical ventilation (e.g., status 0) between 2009 and 2018 (Table 1). This is much higher than the proportion reported in the United States of America, which is less than 8% (7). This is primarily due to the difference in the allocation system. The Lung Allocation Score (LAS), suggested by the United Network for Organ Sharing, considers not only the urgency but also the life expectancy of the recipient after transplantation. LAS was successfully introduced in the United States of America and increased the survival of LT (8). However, in Korea, the LAS is based only on the disease severity of the recipient (Table 2). Consequently, more patients with severe disease on ECMO or ventilator support receive the lungs, which might explain the poor outcome of LT in Korea (9). Studies have suggested revision of the Korean LAS to reduce the proportion of status 0 patients undergoing LT, for better survival (10).

The waiting period for LT recipients is increasing, mainly due to the paucity of donors (Table 3). As seen in Table 4, the number of enlisted recipients has doubled during the last 3 years; however, the number of brain-dead donors remains stagnant. To overcome this shortage, the rate of usage of the lungs must be increased. According to the KONOS registry, Yeo et al. (11) reported that only 12.9% of brain-dead patients donated their lungs between 2012 and 2016. According to Kotecha et al., the rate of lung usage from brain-dead donors was 22% in the United States, 32% in Europe, and 41% in Australia in 2012, which was more than twice the lung usage rate in Korea (12). This was because only 22.6% of the donors consented to lung donation, while 35.9% of the marginal donors were neglected. To minimize this discrepancy, public education and encouragement by clinicians to the potential donors’ families to donate the lungs is necessary; this might increase the total number of donors and implement a change in criteria. Further, systematic donor management is also necessary to include the marginal lungs for donation (11). Park et al. suggested that proper management of the ICU, a new organ procurement program, and LDLLT could increase the usage rate and the total number of lung donations (13). Furthermore, Yeo et al. (11) reported that lungs from 127 (9.7%) consenting donors were not used from March 2012 to March 2016 because it did not match with the final recipients. This was because of the recipients’ condition being inoperable when the donor lung was available, especially among patients in the ICU. Therefore, maintaining or improving the physical status of the recipients in the ICU is crucial to increase the lung usage rate. Organ procurement programs, including harvesting lungs from patients with circulatory arrest or using ex vivo lung perfusion, could be suggested (14). However, in Korea, no lungs were harvested from patients with circulatory arrest and no study has been conducted using ex vivo lung perfusion for an actual LT. LDLLT is a technique that uses two lower lobes from two healthy donors for transplant to a single recipient. LDLLT could be very helpful for children or young patients who are unable to find matched donor lungs in time.

Lung usage and number of enlisted recipients in Korea

†, Number of enlisted recipients at the end of the year.

Locations of LTs performed in Korea

Results and survival of LT in Korea

According to the KONOS transplantation registry, from January 2009 to December 2018, 537 patients underwent LT in Korea (Figure 1). Majority of the recipients were male (60.3%), and more than half the recipients were aged between 50 and 64 years (51.2%) (Table 1). Nearly half of the receivers were at status 0 (46.2%) and 38.2% were at status 1 (Table 1); a patient is considered to be at status 0 when a ventilation or ECMO is required (Table 2). The most frequent diagnosis in these recipients was IPF, which accounted for 49.9% of all cases. Male patients comprised 67.2% of the total cohort, and 39.2% of the patients were aged between 50 and 64 years (Table 1). The waiting period between registration and transplant is shown in Table 3. The KONOS data show a tendency of increasing interval. The number of patients enlisted and lung usage rates from brain-dead donors are shown in Table 4. The lung usage rate increased steadily up to 34.9% in 2019 according to KONOS. 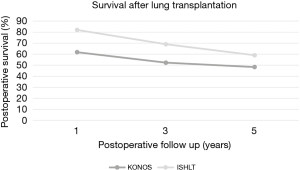 Few studies have reported the results of LT in Korea. The first study was by Haam et al. in 2008 (15), which reported the results of 18 patients who received lung or heart-LT between July 1996 and October 2007 at Yonsei Severance Hospital. In this study, nine single LTs, eight bilateral LTs, and one heart-LT was performed. Five patients died postoperatively, and the mean survival period of the surviving patients was 18.5±23.7 months. Furthermore, the clinical outcome of heart-LT was also published by Yun et al. from a single center study (16) that included 11 patients who underwent heart-LT at AMC between July 2010 and August 2014. Early postoperative mortality occurred in two patients, and late mortality occurred in three patients who survived more than 22 months. The survival rates at 1, 2, and 3 years after the heart-LT were 80%, 67%, and 53%, respectively. Jo et al. reported the post-LT survival rates for 60 adult patients, consisting of 51 bilateral LTs and 9 heart-LTs performed in AMC between January 2008 and December 2017, at 1, 3, and 5 years were 75.5%, 67.6%, and 61.8%, respectively (17). In addition, the first report using data from the Korean Organ Transplant Registry (KOTRY) was published by Lee et al. in 2018 (18), in which a total of 69 patients were enrolled from five institutions, and the 1-year survival rate was 60.3%.

In Korea, LT is characterized by a high rate of critical patients receiving transplantation. The Korean LAS needs to be adjusted to decrease the number of patients with severe disease undergoing LT to improve LT survival.

The authors appreciate KONOS for providing access to the national lung transplantation database and the participating centers and the members of the Lung Transplantation Centers. We would like to thank Editage (www.editage.co.kr) for English language editing.

Provenance and Peer Review: This article was commissioned by the Guest Editors (Jing Yu Chen and Michael Hsin) for the series “Highlights of the First International Symposium on Lung transplantation, Wuxi, China, 2019” published in Current Challenges in Thoracic Surgery. The article has undergone external peer review.

Conflicts of Interest: All authors have completed the ICMJE uniform disclosure form (available at https://ccts.amegroups.com/article/view/10.21037/ccts-20-110/coif). The series “Highlights of the First International Symposium on Lung transplantation, Wuxi, China, 2019” was commissioned by the editorial office without any funding or sponsorship. The authors have no other conflicts of interest to declare.