Patients undergoing general thoracic surgery are at high risk to develop major postoperative complications, whose incidence and severity are influenced by several factors, such as the medical comorbidities and the performance status at hospital admission, the disease requiring surgery, and the physiologic impact of the procedure (1). Acute respiratory failure (ARF) with acute respiratory distress syndrome (ARDS) and adverse cardiovascular events are the most serious complications after general thoracic surgery, and both events are associated with increased morbidity and mortality (2,3). Extracorporeal membrane oxygenation (ECMO) is a lifesaving technique that supports gas exchange or hemodynamic parameters in patients with severe respiratory or cardiac failure, and thus it can be a rescue therapy for patients developing major complications after general thoracic surgery. In the recent years, a significant increase in the utilization of ECMO has occurred in thoracic surgery, as a growing numbers of centres are using this lifesaving technique mostly in the perioperative period of lung transplantation, either to bridge the patient to transplant or to prevent and treat right ventricular failure and primary graft dysfunction (4). However, little is known about the role of ECMO after general thoracic surgery.

Inclusion criteria were: (I) age >18 years, (II) ECMO support as treatment of postoperative complications, (III) general thoracic surgery procedures during the hospital stay. Patients were considered eligible for ECMO according to the Extracorporeal Life Support Organization (ELSO) guidelines. VV ECMO was chosen if the patient had a ratio of partial pressure of arterial oxygen to the fraction of inspired oxygen (PaO2/FiO2) <100 on FiO2 >0.9 and/or Murray score 3–4 and/or carbon-dioxide (CO2) retention, despite optimal care on mechanical ventilation (5). VA ECMO was initiated if hypotension and low cardiac output caused insufficient tissue perfusion, despite adequate volume administration, inotropes and vasoconstrictors (6).

The study was conducted in accordance with the Declaration of Helsinki (as revised in 2013). The retrospective historical nature of the study waived the need for ethical approval. Informed consent for data publication was routinely obtained from each patient at the time of hospital admission. 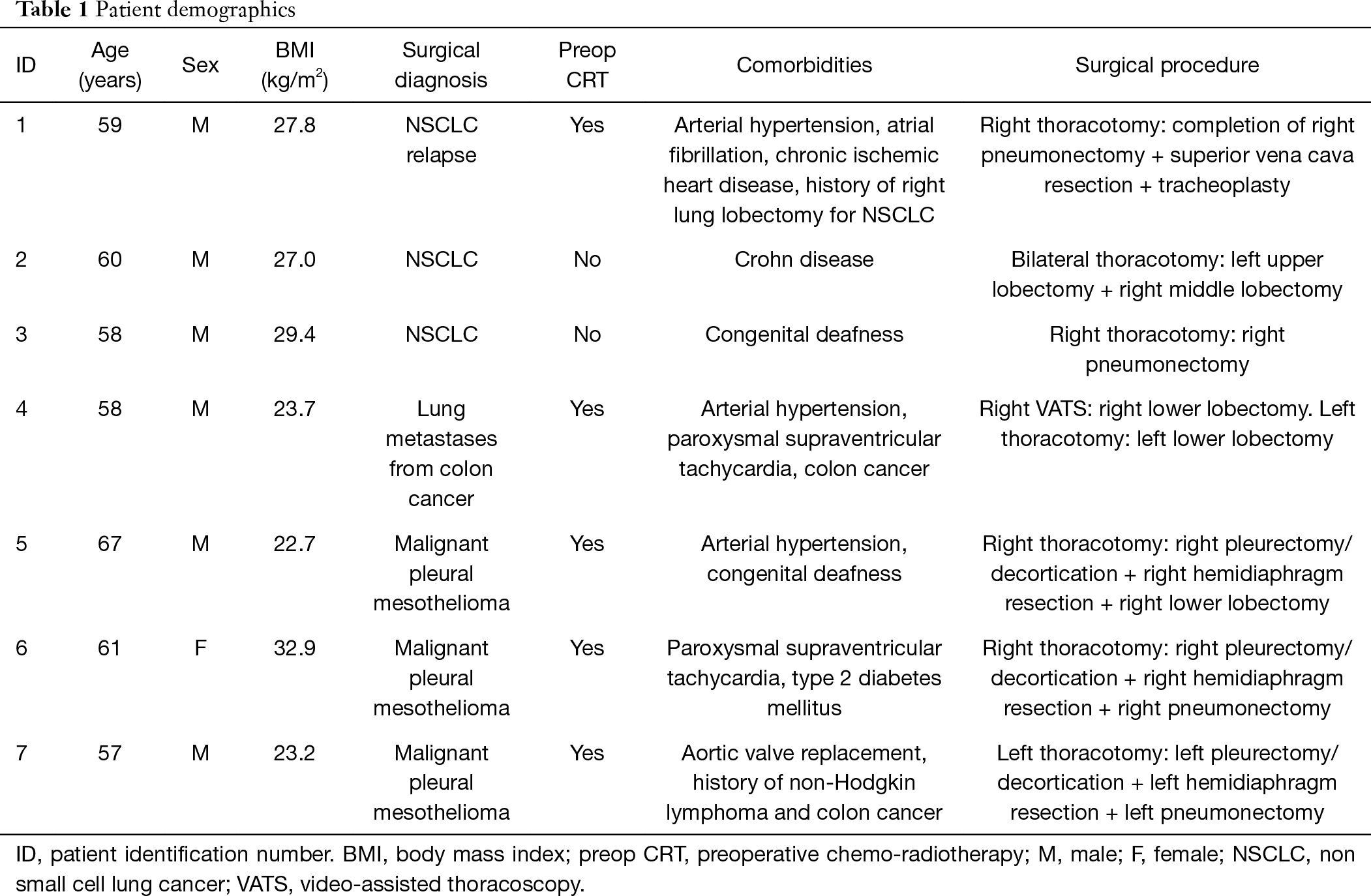 ECMO characteristics are reported in Table 2. The average time between surgery and ECMO placement was 8.4 days (range, 0–20 days). The cause for ECMO initiation was ARDS in 3 (42.9%) cases and cardiac failure, followed by haemodynamic instability, in 4 (57.1%) patients. The majority of patients received VA ECMO (85.8%), except for one. The only patient supported by VV ECMO was managed with awake strategy for 2 days before requiring endotracheal intubation followed by IMV. ECMO-related complications occurred in 2 (28.6%) cases.

Postoperative complications requiring ECMO support after general thoracic surgery are usually associated to high mortality. In our experience, during a period of 10 years, 0.1% of patients who underwent general thoracic surgery developed severe postoperative adverse events requiring ECMO treatment. Among these patients, more than 40% died in ICU and only 33.3% was still alive after 1 year.

To our best knowledge, few investigations were previously published on the use of ECMO after general thoracic surgery and most of them were based on quite small sample sizes. Indeed, excluding case-series with less than 3 patients, only seven studies remain to consider.

The first study searched the ELSO registry data from 2007 to 2010 and found 21 patients who underwent ECMO for tracheal stenosis, of whom 5 were on VV ECMO and 16 on VA ECMO (7). Although the authors do not specify whether ECMO support was initiated preoperatively or postoperatively, they reported a survival rate of 57%.

The third study presented 10 patients treated with awake ECMO for postoperative ARDS with a survival rate of 80% (9). In this case-series, 7 (70%) patients experienced thoracic surgery and then developed ARDS either due to postoperative pneumonia (4 patients) or to massive haemoptysis (3 patients).

A more recent retrospective study recorded an incidence of 0.2%, over 8 years, of ECMO placement after general thoracic surgery. Specifically, 29 patients required postoperative extracorporeal life support among 17,185 adults who underwent general thoracic surgical procedures (10). The indications for ECMO were respiratory failure in 82.8% of cases, and hemodynamic instability in 17.2% of cases. These authors reported a survival to decannulation and a survival to hospital discharge of 34.5% and 24.1%, respectively. Notably, prolonged time between surgery and ECMO placement (>2 days) was a significant risk factor for hospital mortality.

In another recent study, among 232 adult patients who underwent pneumonectomy during a 6 years period, 8 patients (3.4%) required postoperative VV ECMO support due to severe ARDS. Four patients out of 8 survived to hospital discharged, increasing the expected survival rate, based on the Sequential Organ Failure Assessment (SOFA) score, from 20% to 50% before ECMO insertion (11).

Another retrospective review of patients who received extracorporeal support after thoracic surgery over 5 years period identified 6 patients placed on VV ECMO and 2 patients placed on VA ECMO (12). Among these 8 patients, 4 (50%) were successfully weaned from extracorporeal support and 3 (37%) survived to hospital discharge. Remarkably, this study demonstrated that ECMO after general thoracic surgery costs significantly more than in other subgroups of patients, with an average total hospital charge of $1,053,551 each patient.

Finally, a study on 20 postoperative ECMO applied in non-cardiotomy patients counted 10 cases who underwent general thoracic surgery over an eleven years period. The indications for extracorporeal support were respiratory failure (80%) and cardiogenic shock (20%) with a length of time between surgery to ECMO of 4 days and ECMO length of time of 8 days (13). The survival to hospital discharge was 60%.

In summary, the survival rates reported in these studies are extremely variable, ranging from 7% to 70%. These unclear and heterogeneous results may be ascribable to severe disparities in study design and to heterogeneous surgical populations with different pulmonary pathologies, comorbidities and surgical procedures. Indeed, the survival rate for ECMO patients differs significantly between studies, ranging from 29% at hospital discharge in adult patients requiring VA ECMO for cardiac arrest unresponsive to conventional cardiopulmonary resuscitation (14), to 65% at 60 days in adult patients supported for severe ARDS (15), and up to 95% at 30 days in adult patients prophylactically treated with VA ECMO after bilateral lung transplant (16).

Patients undergoing general thoracic surgery procedures are mainly affected by oncological diseases and present often numerous comorbidities, which may impair their performance status and cause a significant decline in multiple physiological systems (17). Moreover, frailty is a frequent condition in patients who underwent thoracic surgery, and more than 69% of candidates usually have more than one frailty trait (18). This finding could justify the lower survival rate registered among patients supported with ECMO after general thoracic surgery compared to other ECMO populations. Notably, in our experience, although all the patients had thoracic malignancies and 72% of them underwent preoperative oncological treatments (including chemotherapy and radiotherapy), all patients, except 1, were successfully weaned from ECMO, and only 28% of the patients experienced ECMO-related complications.

When patients develop severe cardiopulmonary complications after general thoracic surgery not manageable with conventional therapy, ECMO appears to be a valid option in order to allow multi-organ recovery and to make better clinical decisions. Indeed, these patients should not be excluded a priori from extracorporeal support. Even if ECMO is an invasive and very resource-consuming treatment, for each case a multidisciplinary risk/benefit balance should be evaluated before ECMO initiation, assessing not only the preoperative comorbidities, but also the type of surgery performed, the patient’s postoperative clinical conditions, the timing of the call for initiation of ECMO, and the previously expressed wishes of the patient. Extracorporeal support should be offered if there is a reasonably chance that ECMO will achieve the desired outcome and if the patient would likely benefit from it in a middle-long term perspective (19).

ECMO support after general thoracic surgery is a lifesaving rescue option for the treatment of postoperative cardio-respiratory complications in the rare cases (0.1%) that cannot be managed with conventional therapies. In this highly selected population, postoperative ECMO use is associated with acceptable survival rate (ICU survival rate 57.1%, and 1-year survival rate 33.3%). Further studies, with larger multicentric sample sizes, are needed to determine the effectiveness of ECMO application after general thoracic surgery, and to establish safe prognostic criteria for identifying patients who mostly benefit from a valid postoperative ECMO support.

Provenance and Peer Review: This article was commissioned by the editorial office, Current Challenges in Thoracic Surgery for the series “Mechanical Extracorporeal Cardio-Respiratory Supports in General Thoracic Surgery”. The article was sent for external peer review.

Reporting Checklist: The authors have completed the STROBE reporting checklist. Available at http://dx.doi.org/10.21037/ccts-20-132

Conflicts of Interest: All authors have completed the ICMJE uniform disclosure form (available at http://dx.doi.org/10.21037/ccts-20-132). The series “Mechanical Extracorporeal Cardio-Respiratory Supports in General Thoracic Surgery” was commissioned by the editorial office without any funding or sponsorship. ADA served as the unpaid Guest Editor of the series. The authors have no other conflicts of interest to declare.

Ethical Statement: The authors are accountable for all aspects of the work in ensuring that questions related to the accuracy or integrity of any part of the work are appropriately investigated and resolved. The study was conducted in accordance with the Declaration of Helsinki (as revised in 2013). The retrospective historical nature of the study waived the need for ethical approval. Informed consent for data publication was routinely obtained from each patient at the time of hospital admission.