This was a retrospective cohort study. After research ethics board approval, the Halifax, Nova Scotia regional health district diagnostic imaging computed tomography (CT) database was searched using the following key terms: hiatal hernia, diaphragmatic hernia, intrathoracic stomach, and paraesophageal hernia over the time period from January 2010 to January 2015, inclusive. All CT scans were individually assessed to classify the type of diaphragmatic hernia as either congenital (Bochdalek and Morgagni) or paraesophageal (sliding and Type II–IV), with giant hiatal hernia defined as greater than 50% of the stomach in the thoracic cavity. A second reviewer was used if there was any question regarding the classification of hernia based on CT imaging, and a consensus was reached. Personal health records for each identified case were further analyzed to record: emergency department visits, clinic notes representing referrals to thoracic or general surgery for hernia repair, and operative notes for elective or emergent hernia repair. Additionally, we analyzed emergency department charts to determine if patients were presenting with symptoms related to their hiatal hernia. Duplicate CT scans demonstrating a hiatal hernia in the same patient were excluded.

The study was conducted in accordance with the Declaration of Helsinki (as revised in 2013).

Between January 2010 and January 2015 a total of 357,213 CT chest and CT abdomen reports were searched for the key terms identifying 406 patients with a diaphragmatic hernia. Table 1 summarizes the patient demographic and classification of hernias. The median age of all patients with a diaphragmatic hernia was 78 [70–83] with a gender predominance favoring female (4:1). 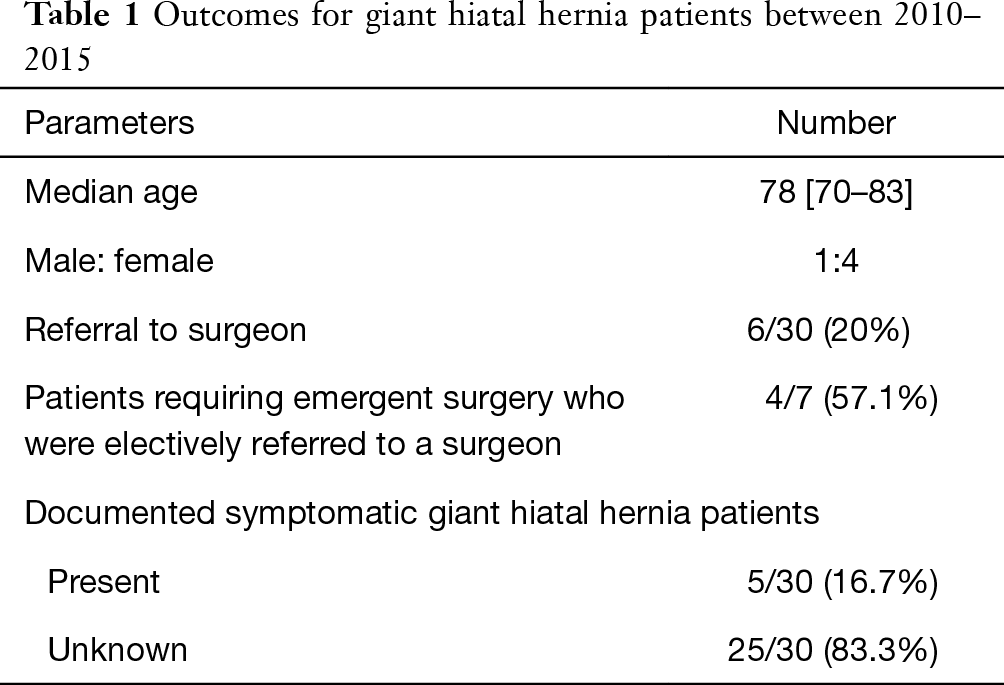 Figure 1 Breakdown of diaphragmatic hernias identified by CT from 2010 to 2015. CT, computed tomography. 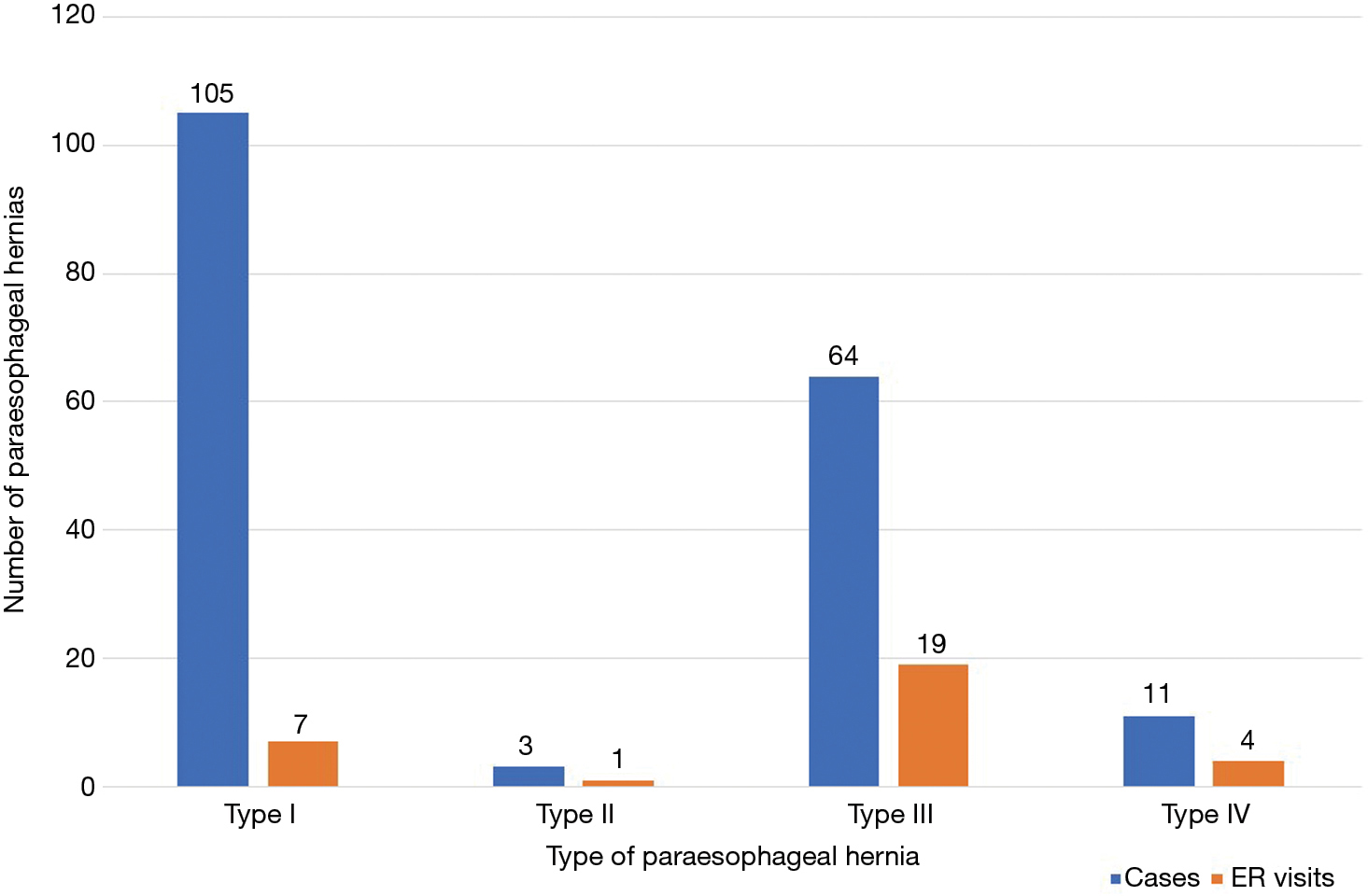 Figure 2 Number of paraesophageal hernias based on CT and those cases presenting to ER with hernia related symptoms between 2010–2015. CT, computed tomography; ER, emergency room.

The management of asymptomatic hiatal hernias still remains a controversial subject. Stylopoulos et al. demonstrated that above the age of 65 the risk of elective repair of asymptomatic hernias outweighed the annual risk of major complications (1). Carrott et al. have suggested that symptoms associated with paraesophageal hernias are more extensive than previously thought, and that truly asymptomatic patients are in fact rare (5). Both Low et al. and Carrott et al. have also demonstrated that repair of paraesophageal hernias can lead to both subjective and objective improvements in respiratory function, a symptom not typically associated with paraesophageal hernias (6,7). Additional studies have also demonstrated a resolution of anemia, as well as improved exercise tolerance from decreasing compression of the left atrium as a result of elective paraesophageal hernia repair (8,9). Furthermore, Carrott et al. also found that patients had an overall improvement in symptoms not typically associated with hiatal hernia, that being: early satiety, chest pain, shortness of breath, and cough, in addition to those classic symptoms described in the literature: acid reflux and dysphagia (5). This was primarily the result of an appropriate history taken by the surgeon during the patient encounter, where a complete evaluation of typical and atypical symptoms, as well as their evolution over time were assessed. Together these studies would suggest that patients with large paraesophageal hernias may have symptoms that are not fully evaluated, and are therefore possibly not being appropriately referred for a surgical assessment.

We found that in our region of Canada, greater than 40% of patients with known giant hiatal hernias who required emergency surgery had not previously been referred to a surgeon. It is not expected that all patients referred will be candidates for surgical resection. However, a discussion between the surgeon and patient should take place to determine if the patient is truly asymptomatic and to discuss the surgery risks and benefits of repair in a typically older demographic with comorbidities. Despite these reported benefits of surgical repair, this study suggests a lack of surgical referral in those patients who could potentially derive benefit from paraesophageal hernia repair (6-9). Hesitation to refer may be due in part to primary care physician reluctance based on advanced age and concern of intraoperative and perioperative morbidity and mortality.

Our results show the median age of patients with a giant hiatal hernia is 78 years old. Intraoperative and perioperative morbidity and mortality are common concerns when assessing surgical risk in elderly patients. However, Parker et al. found no statistical difference in overall morbidity or mortality associated with laparoscopic paraesophageal hernia repair comparing patients less than 69 years old to patients greater than 80 years old, concluding that safe laparoscopic surgical repair can be accomplished in the elderly (10). Furthermore, since Stylopoulos et al. study in 2002, a study by Kaplan et al. in 2015 found lower rates of morbidity and mortality associated with elective repair of hiatal hernias and suggested that frailty was the main factor effecting surgical outcome (11). Assessment of operative risk, surgical approach, and risk of requiring emergent operative intervention is best determined by a surgeon familiar with preforming hiatal hernia repairs and the post-operative management.

In our study, we found that patients with giant hiatal hernias were more likely to present to the emergency department with symptoms and ultimately require emergent repair. While we did not specifically look at length of hospital stay, or morbidity, several other studies have found higher mortality rates and length of hospital stay associated with emergent repair (2,3). The higher risk of emergent repair and the associated increased risk of mortality for patients with a giant hiatal hernia, further supports the need to refer these patients for surgical assessment to determine operability.

This study is limited by several issues. This is a retrospective study, and therefore the conclusions are limited to the original data collection in our electronic health record. Secondly, our patient population is limited to the key terms listed used to search our diagnostic imaging database, and as such limited to the radiologist’s reports. Therefore, we could potentially be missing cases in our population if the finding is not dictated in the radiology report. This may be only a small limitation regarding our giant hiatal hernia outcomes, given that most radiologist, when asked at our local institution, say they would comment on hiatal hernias even if chronic. Thirdly, assessment of symptoms from ER notes were limited. There were several patient encounters where the reason for visit was chest pain with a negative cardiac workup, but a known giant hiatal hernia which could potentially be attributed to their chest pain.

We could not identify any study assessing referral patterns for paraesophageal hernias, and therefore cannot compare to other populations to suggest whether this is truly a local phenomenon and could potentially be an area of further investigation. Additionally, surgical decision-making tools to help patients and practitioners determine appropriate surgical candidates, weighing intra and perioperative risk versus symptoms could potentially be developed.

Reporting Checklist: The authors have completed the STROBE reporting checklist. Available at http://dx.doi.org/10.21037/ccts-19-47

Conflicts of Interest: Both authors have completed the ICMJE uniform disclosure form (available at http://dx.doi.org/10.21037/ccts-19-47). The authors have no conflicts of interest to declare.

Ethical Statement: The authors are accountable for all aspects of the work in ensuring that questions related to the accuracy or integrity of any part of the work are appropriately investigated and resolved. The study was conducted in accordance with the Declaration of Helsinki (as revised in 2013). The study was approved by research ethics board of IWK Research Ethics Board (ROMEO) (No. 4276) and individual consent for this retrospective analysis was waived.