Early stage non-small cell lung cancer (NSCLC) is usually treated with minimally invasive surgery. Video-assisted thoracoscopic surgery (VATS) is the most commonly used minimally invasive surgery. Most hospitals perform multiportal (3-4 ports) VATS. However, the development of new instruments and surgical techniques has reduced the number of ports, resulting in 2-port VATS and eventually uniportal VATS, which is considered a form of evolution of multiportal VATS (1). Some studies reported that uniportal VATS has the advantages of less postoperative pain, faster recovery, decreased length of hospital stay, and potential earlier administration of adjuvant therapy than multiportal VATS (2,3). The advantages result from the use of only 1 intercostal space and more anterior placement of the incision than in multiportal VATS.

A 65-year-old female patient visited our hospital with a suspicion of lung cancer in the left upper lobe (LUL) of the lung. Ten years ago, she underwent mastectomy of left breast and postoperative radiotherapy for breast cancer. After treatment for breast cancer, the patient had regular checkups including a plain chest radiograph every 6 months without any evidence of recurrence. She had no symptoms or signs of disease. Six months ago, a plain radiograph of the chest showed radiation pneumonitis in the LUL, which was not unlike previous findings. However, there was a newly developed lung mass in the most recent chest X-ray where the radiation pneumonitis was present (Figure 1). Chest computed tomography (CT) with contrast demonstrated an approximately 3-cm solid lung mass on the LUL apical segment (Figure 2). She underwent CT-guided percutaneous core needle biopsy and the mass was diagnosed as lung adenocarcinoma. In the F-18 fluorodeoxyglucose (FDG) positron emission tomography (PET) scan, the maximum standardized uptake value (SUVmax) of the tumor was 15.6. The left paratracheal lymph node (#4L) was enlarged with mild FDG uptake (Figure 3), but the endobronchial ultrasonography (EBUS) and transbronchial needle aspiration (TBNA) biopsy results were negative for malignancy. The left subaortic lymph node (#5) and interlobar lymph node (#11) were also enlarged and the interlobar lymph node had intense FDG uptake on PET scan. The clinical stage was T2aN1orN2M0 and curative surgery was chosen with the patient’s consent. 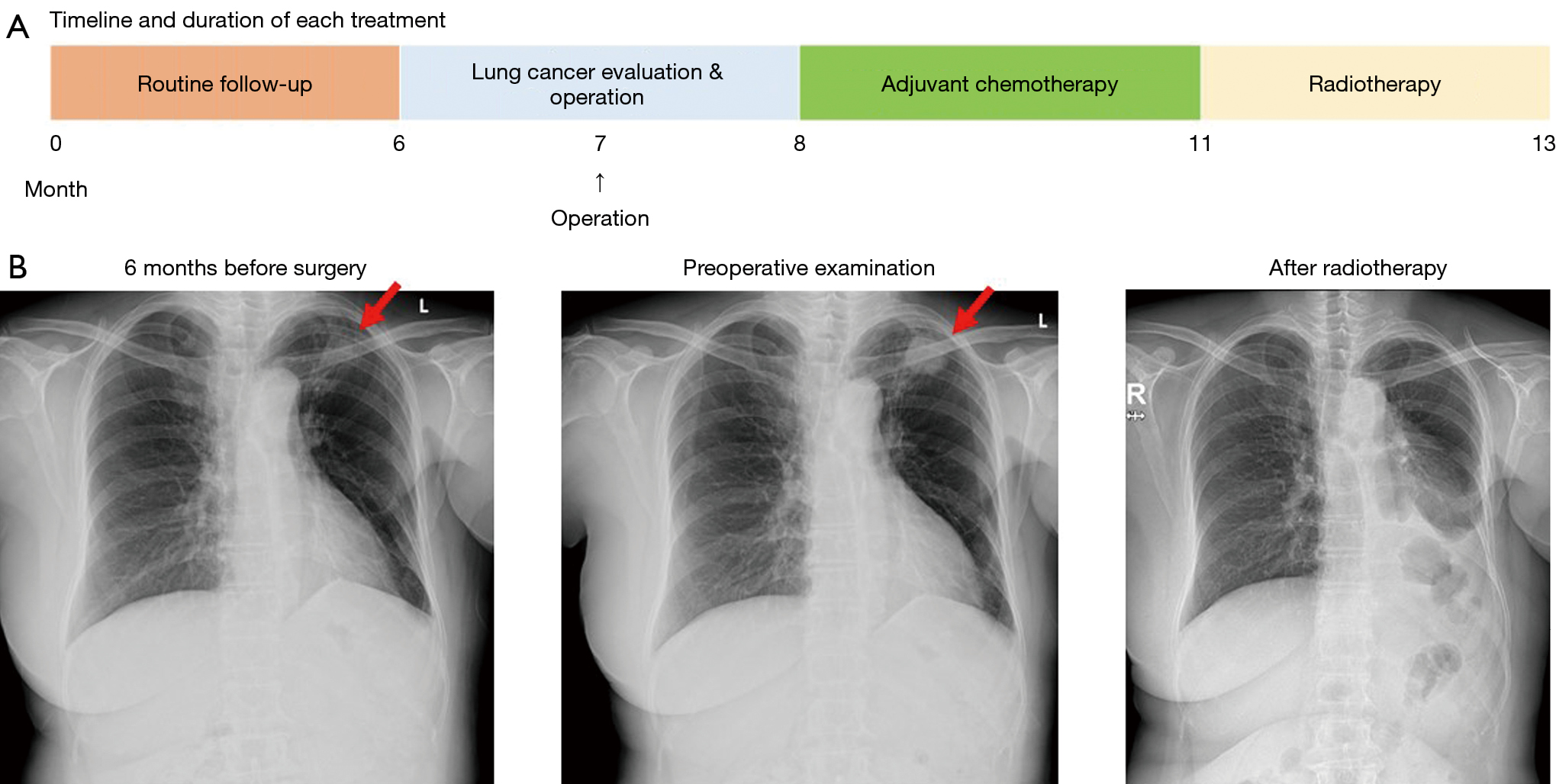 Figure 1 (A) Time line and duration of each treatment and (B) chest plain radiograph before and after treatment. 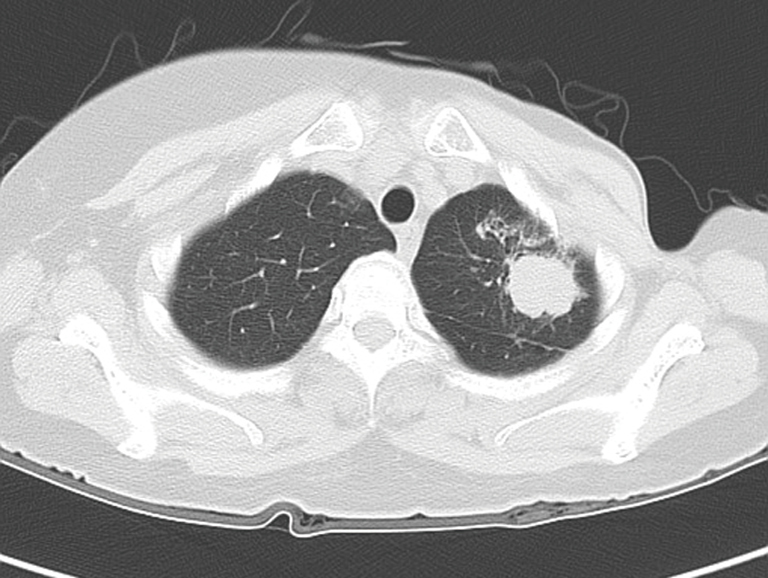 The patient underwent uniportal VATS LUL lobectomy with systematic nodal dissection including left paratracheal lymph node (#4L) dissection. The patient position and anesthesia were the same as that of conventional VATS. A skin incision was made in the fifth intercostal space between the midaxillary and anterior axillary lines. The incision length was 4 cm. The 30-degree high-definition thoracoscope was located at the top of the working wound. An energy device (HARMONIC ACE, J&J Pharmaceuticals) and curved long suction device (SCANLAN Wolf Suction Instrument 9009-912, Scanlan International) were located in the middle of the wound. The lung was retracted with a lung-grasping clamp that was located in the lowest portion of the working wound. Using the curved suction device and the straight energy device, the surgeon achieved an unobscured field of view. The suction device both aspirated the surrounding blood and pushed or pulled the surrounding tissues, facilitating tissue dissection. Large vessels were divided with staplers. Small vessels were ligated with silk string or clips and divided with the energy device. The operation began with a hilar dissection, and the superior pulmonary vein was exposed. Then, by changing the angle of the stapler to orient the anvil into the proximal portion of the vessel, the vessels were divided. After dividing the superior pulmonary vein, the anterior and apical branches of the pulmonary artery was divided by a stapler at the same angle. After fissure division, the lingular segmental artery and posterior segmental artery were divided by a stapler and surgical clips. Lymph node dissection around the lobar bronchus was conducted, and the bronchus was divided by a stapler. Systematic nodal dissection was performed by en bloc resection of the lymph nodes and adjacent fat tissues. The lymph nodes were dissected using a nongrasping technique that involved dissection of the surrounding tissue with an energy device and use of a suction device for pushing or pulling without grasping the lymph nodes. Left paratracheal lymph nodes (#4L) were enlarged and they were exposed after subaortic lymph node dissection (#5) (Figure 4). The paratracheal node was also removed by en bloc resection (Figure 5). In order to sufficiently expose the subcarinal node, the bronchus and aorta were retracted using 2 curved suction devices and then en bloc removal was performed by using an energy device until the right main bronchus was exposed (Figure 6). After left upper lobectomy and systematic nodal dissection (Figure 7), a chest tube was inserted into the thoracic cavity through the working incision, and the incision site was closed layer by layer. No complications occurred during the operation. The anesthesia time was 225 minutes, and the operative time was 162 minutes. There were no postoperative complications. The chest tube was removed on day 3 postoperatively and the patient was discharged on day 8. The final diagnosis after analysis of the pathologic specimen was lung adenocarcinoma stage T2aN2M0. The number of dissected lymph nodes was 52 (N1, 11; N2, 41). Left paratracheal and subaortic lymph nodes had metastatic cancer cells. Although the cancer was completely resected, the patient underwent sequential adjuvant chemotherapy and radiotherapy (Figure 1). One month after surgery, the patient received paclitaxel (250 mg) intravenously followed by infusion of carboplatin (600 mg), with each administered on day 1 every 3 weeks for four cycles. Then, the patient received radiation therapy for 5 weeks (50 Gray/5 fractions) after chemotherapy. Ten months have passed since the surgery, and the patient is doing well with regular surveillance without cancer recurrence. 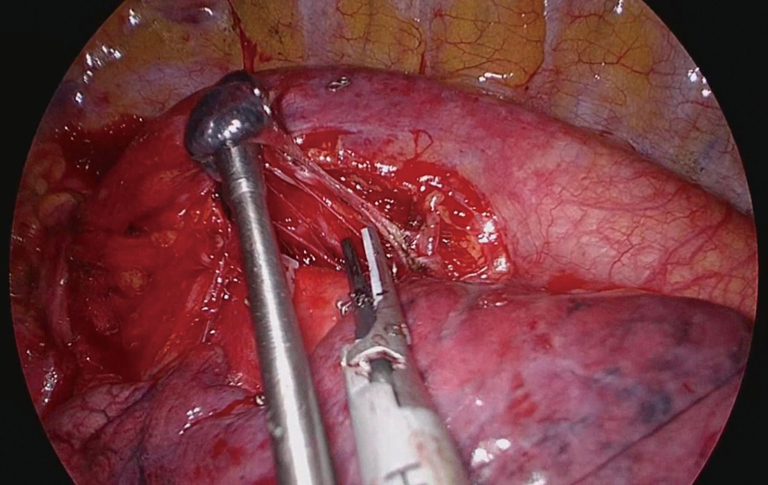 Figure 5 (A) Before and (B) after removal of the left paratracheal lymph node.

Figure 6 (A) Before and (B) after removal of the subcarinal lymph node. After nodal dissection, the right main bronchus was exposed. 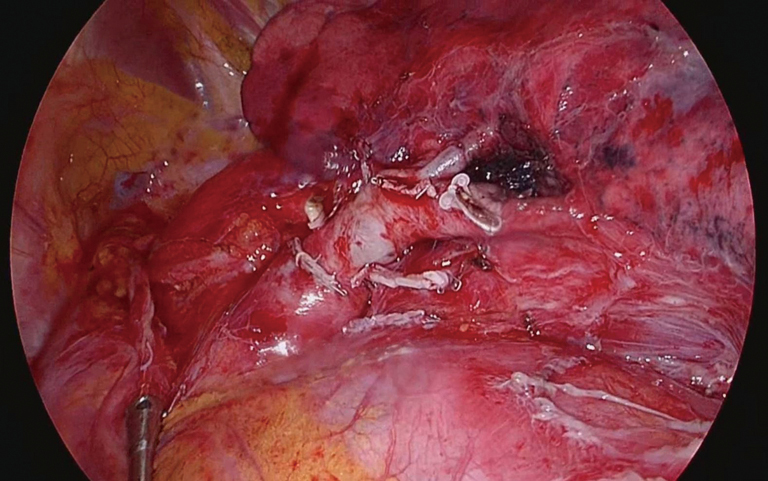 According to the NCCN (National Comprehensive Cancer Network) guideline for NSCLC (version 2.2020), VATS should be strongly considered for patients with no anatomic or surgical contraindications, as long as there is no compromise of the standard oncologic and dissection principles of thoracic surgery. In lung cancer, metastasis mainly occurs in the lymph nodes, so systematic nodal dissection is very important during surgery (5). Several studies have reported good oncologic outcomes only if sufficient lymph node dissection has been achieved (6-8). Therefore, in patients with suspected lymph node metastasis, some surgeons choose open thoracotomy for sophisticated lymph node dissection to improve oncologic outcomes, although VATS has a better surgical outcome (9). Nevertheless, experienced VATS surgeons perform VATS lobectomy with techniques similar to open thoracotomy for advanced lung cancer. With more experience and continued development of better surgical techniques and instruments, the constraints of minimally invasive surgery are gradually decreasing (10). The uniportal technique also has evolved considerably (3,11,12). The 30-degree thoracoscope placed at the top of the wound provides an optimal field of view similar to that of actual open thoracotomy. Moreover, if the surgery is done in the order determined for each lobe using a long curved suction device and energy device, the operation can be performed relatively easily and quickly. Also, if the suction device is used for aspiration as well as for multiple other functions (e.g., to hold, dissect, expose, and compress), there is no need for an additional port. During lymph node dissection, the curved suction device can be used to push or pull the lymph node to dissect the tissue around the lymph node with an energy device for en bloc resection. The node was less likely to break.

This case had several limitations. First, only 1 case has been presented in this report. Second, this case does not represent all stage IIIA (N2) NSCLC. In fact, N2 disease exists in various patterns. Therefore, there may be N2 disease which uniportal VATS is impossible. More cases will be collected and we will present the surgical and oncologic outcomes of uniportal VATS in patients with stage IIIA (N2) NSCLC.

Reporting Checklist: The authors have completed the CARE reporting checklist. Available at http://dx.doi.org/10.21037/ccts-20-56

Conflicts of Interest: Both authors have completed the ICMJE uniform disclosure form (available at http://dx.doi.org/10.21037/ccts-20-56). YM serves as an unpaid editorial board member of Current Challenges in Thoracic Surgery from Jan 2019 to Dec 2021. SYC has no conflicts of interest to declare.