Management of Iatrogenic tracheoesophageal fistula in a patient with dyskeratosis congenita

Dyskeratosis congenita (DKC) is a rare progressive congenital disorder. It can be linked to the X-chromosome, be autosomal dominant, autosomal recessive or sporadic. The disorder is characterized by a failure of normal telomer maintenance resulting in shortened telomers (1). This impacts sites with high cell turnover the greatest. In children the triad of oral leukoplakia, nail dystrophy and skin hyperpigmentation appear to be a common manifestation. The presentation in adult onset DKC is heterogenous. Adult patients may present with bone marrow failure, pulmonary fibrosis, and gastrointestinal inflammation or strictures. A prior evaluation of the PubMed repository revealed 591 case reports on patients with DKC. Of those 43 had gastrointestinal manifestations and only 6 reported cases were of adults with esophageal stricturing disease (2). As such, very little is known of the natural history of patients with this disease. There have been no reported cases of stricturing disease necessitating an operation. The genes that may be involved include TERT (telomerase reverse transcriptase), TERC (the RNA transcript of TERT), NHP2, NOP10, DKC1, or TINF2. The diagnosis of DKC is established by confirming a mutation in one of these genes (3). Sporadic forms of DKC typically involve the DKC1 and TINF2 genes. These genes play different roles in telomer length maintenance and thus patients may present in variable ways based on the involved gene. This paper will focus on the esophageal manifestation of DKC and complications that can arise from its management.

CK is a 30-year-old male who initially presented at the age of 17 with significant dysphagia. An upper endoscopy was performed at that time and he was diagnosed with severe gastroesophageal reflux disease. This failed to respond to non-operative therapies and he eventually underwent a left thoracotomy and Collis gastroplasty with partial fundoplication for this by another surgeon. His symptoms were minimal for 4 years following his operation. He returned with new dysphagia and endoscopic evaluation of his esophagus revealed mid to lower esophageal strictures at 27 to 37 cm from the incisors (Figure 1). These were initially managed with endoscopic balloon dilatations, followed by bougie and Savary dilatations. However, as the interval between dilations decreased the decision was made to place a self-expanding covered esophageal stent. The stent was removed 8 weeks after insertion and provided symptom relief for a further 8 weeks. Despite, improvement in oral intake the patient failed to gain weight. Eventually, the dysphagia returned and on endoscopy the strictures required repeat dilations. A subsequent covered stent was then inserted after 10 weeks of repeat weekly to biweekly dilations. Approximately one month after this second stent insertion, he presented with a 2-day history of progressive solid food dysphagia. Endoscopy revealed a patent stent with an obstructive stricture distal to the stent. This responded well to balloon dilation. He returned to the emergency department the subsequent month with severe dysphagia, unable to control his secretions and with signs of sepsis. He was tachycardic (120–130 bpm), febrile (39.7 °C) with a leukocytosis present on his blood chemistry. His body mass index on this admission was approximately 17 kg/m2. He was resuscitated with intravenous fluids and started on broad spectrum antibiotics. A computer tomography (CT) of his chest was ordered and showed erosion of the esophageal stent into his mid trachea with a resultant right upper lobe pulmonary abscess (Figure 2). He was promptly taken to the operating room for further management. Intraoperative endoscopy was performed which confirmed the presence of a large tracheoesophageal fistula after removal of the stent (Figure 3). A right posterolateral thoracotomy, takedown of tracheoesophageal fistula, primary repair with bovine pericardium and reinforcement with serratus anterior muscle flap, cervical esophagostomy and placement of a gastrostomy tube via laparotomy. The patient had a relatively uncomplicated course following surgery. He had repeat bronchoscopy performed at post-operative day 14 which revealed an intact repair. He was eventually discharged home on post-operative day 30 once adequate nutrition supports and home supports were in place. He continued to gain weight and eventually returned to school to complete his graduate degree that had been put on hold secondary to his illness. A repeat CT performed 6 months later showed a well healed trachea (Figure 4). He is scheduled for reconstruction with a gastric conduit. However, the patient has elected to defer this as he is enjoying an improved quality of life and wishes to complete his education prior to undertaking any further invasive procedures.

Figure 1 Endoscopic evidence of stricuring secondary to congenital dyskeratosis from 27 to 33 cm. 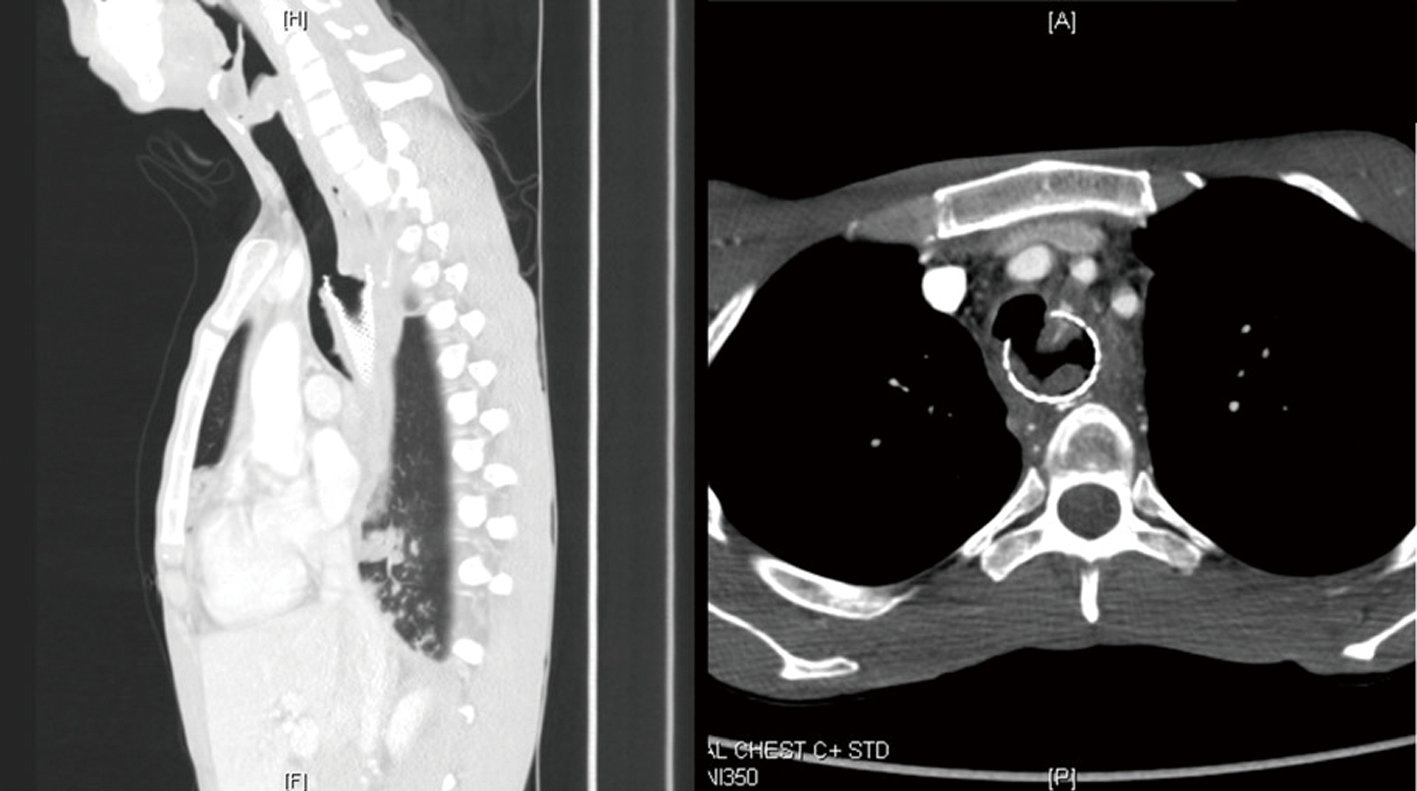 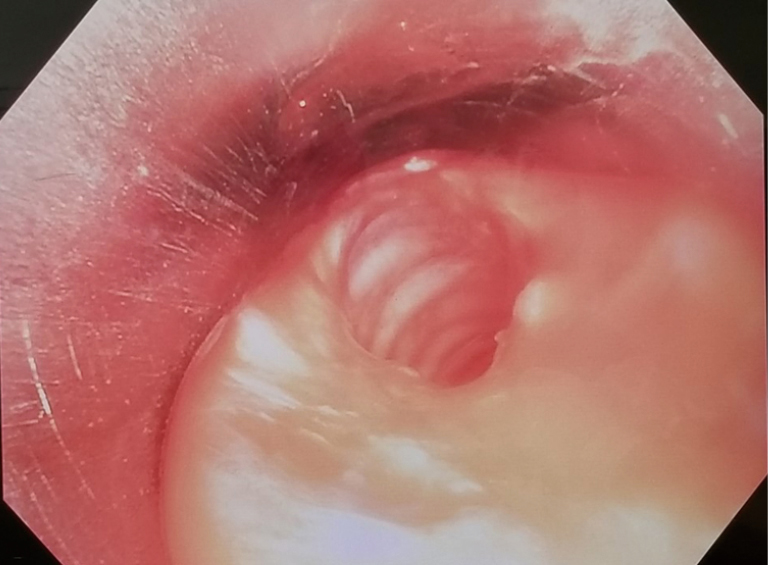 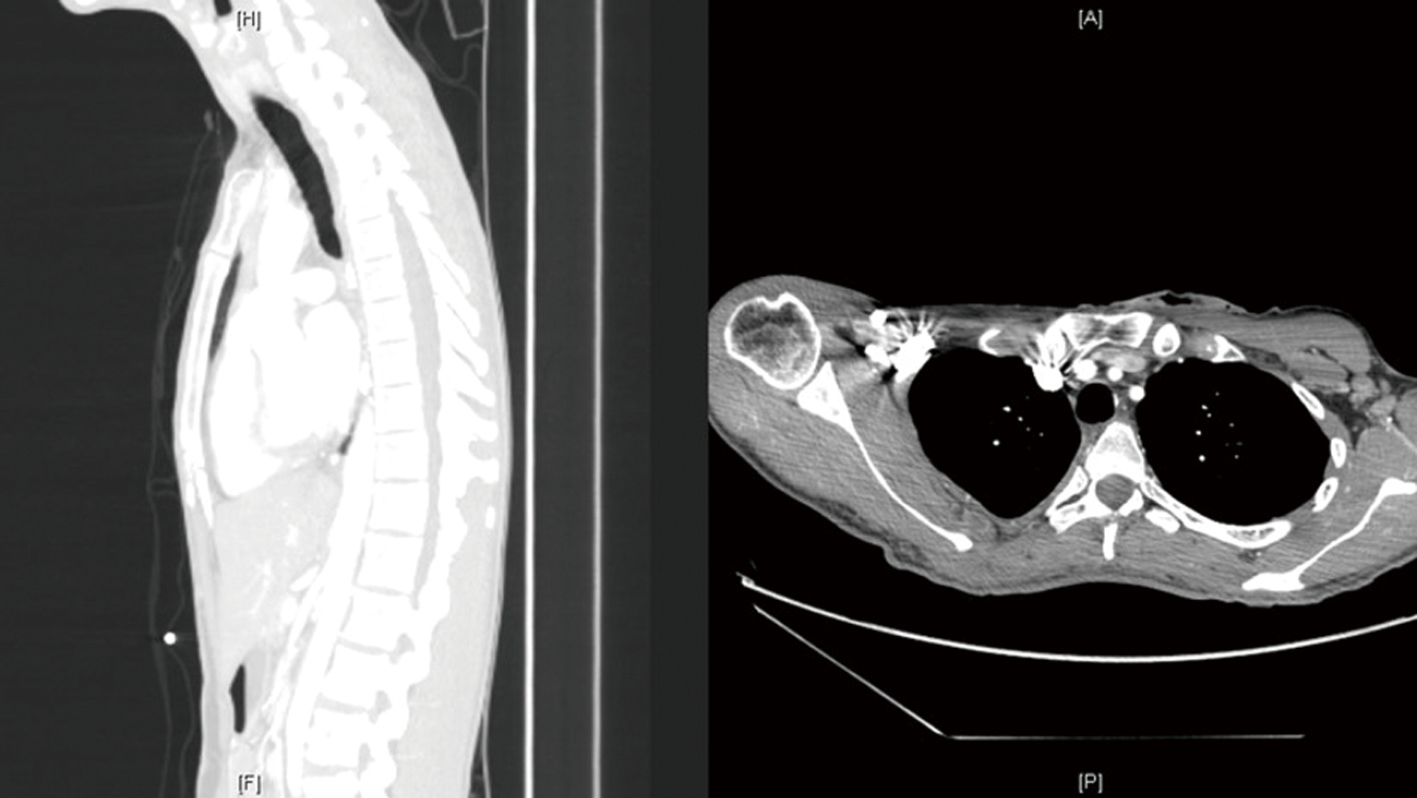 The presentation of esophageal stricturing occurs in roughly 14% of patients with DKC (4). Self-expanding covered metallic esophageal stents have been long available on the market. They are associated with a 0.5–2% mortality rate and up to a 9% esophageal fistula rate (5). They are also prone to stent migration and tissue overgrowth resulting in obstruction. Consequently, they are not recommended for prolonged use in patients with benign disease and who are otherwise good operative candidates. For this patient the delay in definitive surgery was secondary to suboptimal pre-operative nutrition. After presenting with recurrent strictures and despite frequent dilatations and stenting, his caloric intake was insufficient for him to gain weight. Ultimately, it was a life-threatening complication from non-operative management that led to his definitive therapy.

A serratus sparing right posterolateral thoracotomy was chosen as access to the middle and upper trachea was required for repair of the tracheoesophageal fistula. This also facilitated complete esophageal mobilization and resection. A serratus sparing thoracotomy was performed in order to harvest a muscle flap as reinforcement for the repair. The serratus muscle is readily available, substantial and can be mobilized to reach most regions within the thoracic cage. It does require a separate opening in the 3rd intercostal space with rib resection to facilitate placement. A laparotomy was used to separate the abdominal esophagus from the stomach and facilitate placement of a gastrostomy tube. A gastrostomy tube was chosen over a jejunostomy tube as the underutilized stomach was atrophic. It was hypothesized that feeding through the gastrostomy tube may facilitate growth and help establish adequate gastric conduit length for his eventual reconstruction. In the setting of multiple previous esophageal manipulation, the planes for the esophageal dissection were obliterated and the trachea was densely adherent to the esophagus. During this time, care must be taken to ensure the posterior tracheal defect is not enlarged inadvertently during dissection. It is safer to leave some remnant esophagus on the trachea. Intraoperative bronchoscopy during dissection may help identify the distal margin of the tracheal defect. The defect after esophageal resection measured 1.5 cm in length and involved most of the posterior membranous trachea. As such, reconstruction with a biologic material (bovine pericardium) rather than primary repair was performed in order to reduce the risk of long-term tracheal stenosis. Alternatives to bovine pericardium include aortic homograft and acellular dermal matrix (6). Long term follow-up of patients with bioprosthetic repair shows overgrowth of granulation tissue to be the most common complication (7).

The decision to offer a life altering operation to a young patient for benign disease can be daunting (Appendix 1). However, as exemplified in this case, non-operative management can have equally significant consequences. In patients with intrinsic esophageal dysfunction secondary to congenital diseases, initial non-operative management may be trialed. Nevertheless, surgeons should have a low threshold to offer an esophagectomy for definitive management.

Conflicts of Interest: Both authors have completed the ICMJE uniform disclosure form (available at http://dx.doi.org/10.21037/ccts.2020.03.01). The authors have no conflicts of interest to declare.