Pleural SMT are not reported to be associated with exposure to asbestos fibres or tobacco smoking. In addition, this kind of tumour is usually solid, composed of well-circumscribed isolated lesion located at the periphery of the chest or closed to the fissure; latest studies show that occasionally, SMT can affect any anatomic site (3).

This neoplasm has always been characterized by pattern less proliferation of spindly tumour cells associated with pleomorphic cellule types.

SMTs are nowadays associated, under an histologic and immunohistochemical point of view with another kind of soft tissue neoplasm: hemangiopericytoma (4,5).

A hemangiopericytoma is a sarcoma that presumably derived from ubiquitous capillary pericytic cell; it could be founded in every part of the body but usually it’s more common in the extremities, meninges or retroperitoneum (5).

The common diagnosis SFT/hemangiopericytoma, endorsed by the World Health Organization, is based on overlapping features. This includes CD 34 immunoreactivity, cytogenetic abnormalities, pathologic and clinical features: slow growth, clinical indolent until reaching relevant dimension, high local recurrence rate but non-aggressive behaviour (metastases rate is estimated to be less than 10–15%) (5,6). Nevertheless, there are some parameters that could allow to distinguish between these two types of tumour.

In this case report we are going to describe a particular type of SFT/hemangiopericytoma localized in the mediastinum. This neoplasm seems to originate from the capillaries of the sternum. We present the following case in accordance with the CARE reporting checklist (available at http://dx.doi.org/10.21037/ccts.2020.01.05).

A 67-year-old woman, non-smoking, with negative anamnesis for neoplastic or cardiovascular disease, was reported episodes of palpitations and irregular heart rhythm from some months before the first medical interview. Additionally, she reported increased dyspnoea.

Because of a persisting flu symptom (5 month to the recovery), she underwent a chest X-ray, that showed a well circumscribed semi-circular mass, which disfigured the cardiac profile on right side of the hemithorax (Figure 1). 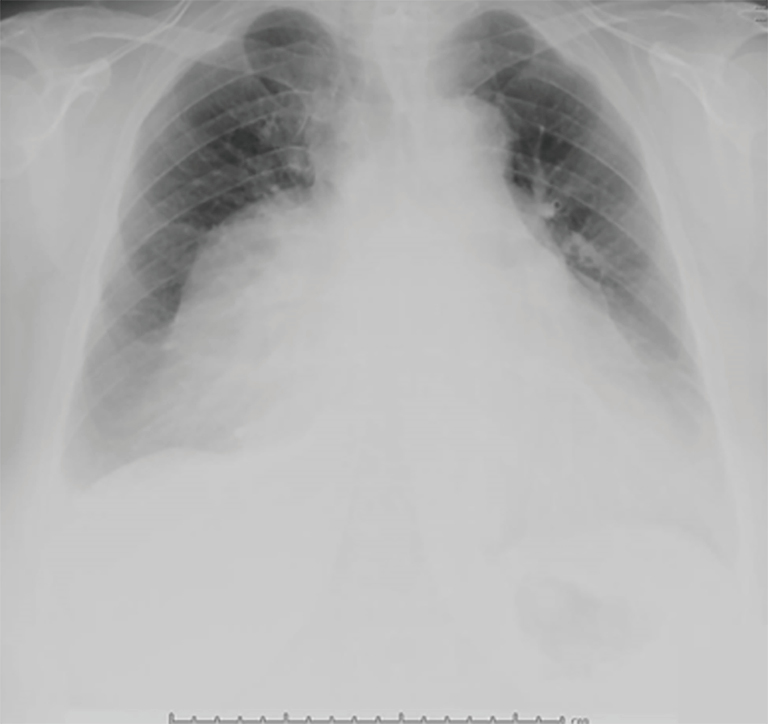 Contrast-enhanced computer tomography scan of the chest confirmed the presence of a large mass in the anterior mediastinum (15 cm × 12 cm × 9 cm in size), solid and very close to the great vessels, particularly to the superior cava, innominate vein, ascending aorta and pericardium. The mass seemed to be closely interconnected to the sternum by its lower posterior face. Moreover, a multinodular thyroid goiter partially immersed in the mediastinum was identified (Figure 2). 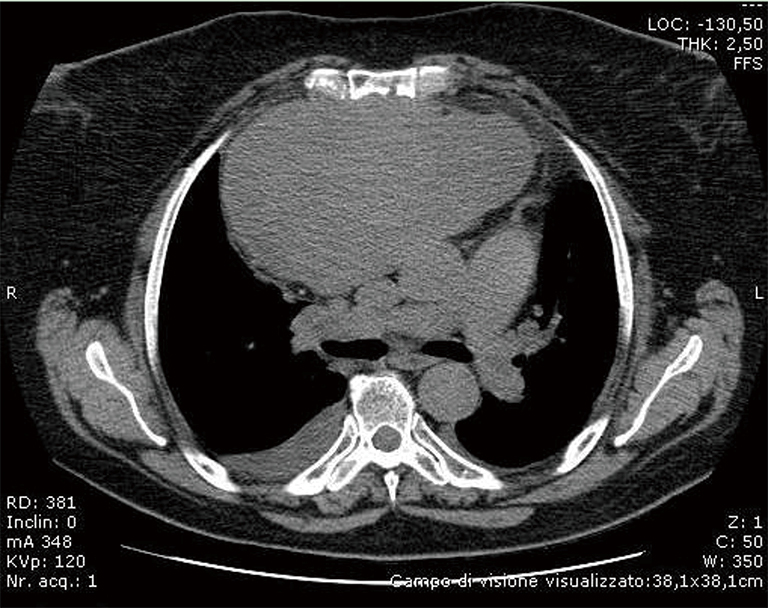 First of all, laboratory investigation for thyroid was found to be within normal range.

Further serological tests, in order to identify the nature of the mass, were needed.

Taking into account the most common neoplasm with this size and this morphological features sited in the mediastinum we used alpha fetoprotein hypothesizing an embryonic origin; antibodies anti-acetylcholine receptor (AChr) were dosed in order to exclude a thymoma, potentially related to an asymptomatic Myasthenia Gravis. All these markers resulted to be negative.

Considering symptomatology, the size and the unknown aetiology and after a multidisciplinary evaluation the patient was candidate for the surgery.

Initially endocrine surgeons performed a thyroidectomy by cervicotomy with the Kocher technique.

Afterwards a median sternotomy was mandatory for approaching the mediastinal mass because of the size and due to the doubt involvement of the inferior part of sternum body, as suggested by the CT images.

During the sternotomy we experienced a moderate bleeding of the mass because of the injury of the part of the tumor infiltrating the low part of the body sternum. The mass was extremely voluminous and richly vascularized.

After controlling the bleeding, the lesion was successfully removed, through dissection and coagulation maneuvers.

After the total resection of the mass, a biopsy of the sternal margin was performed (Figure 3). 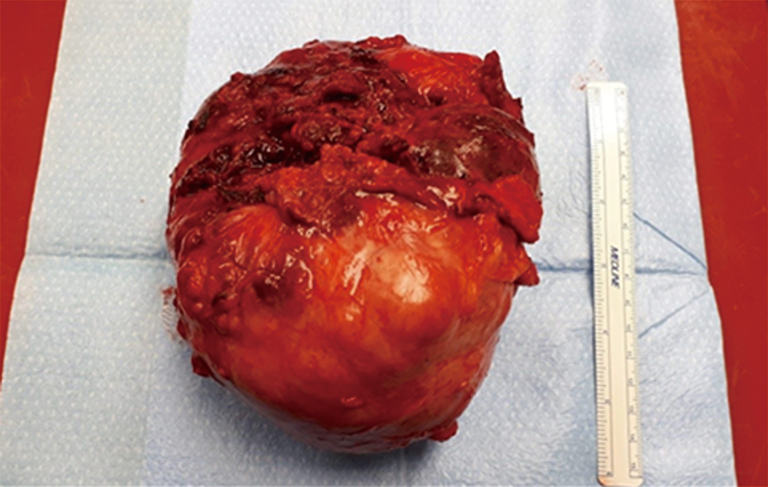 On the second post-operative day, the patient presented a first episode of atrial fibrillation. It has been treated with intravenous cordarone and proceeded with oral therapy.

A recurrence of fibrillation was recorded in third post-operative day with medical conversion. In both cases the patient presented no symptoms.

Considering this arrhythmia, the patient underwent cardiological examination. In view of mute cardiological history, normal ultrasound images, the cardiologist attributed the arrhythmic event to relocation of heart inside mediastinum after the resection of the large neoplastic mass.

The patient was monitored using X-ray chest that highlighted a moderate right pleural effusion. The patient was discharged on the tenth post-operative day.

The Histological report confirmed an STF/hemangiopericytoma, sized 15 cm × 12 cm × 9 cm. The immunohistochemical investigation showed a typical benign pattern and no increased mitotic activity was seen (<5%). On the other hand, the biopsy of the sternal margin confirmed also microscopic presence of the STF/Hemangiopericytoma cells (R1).

Despite the classification unites these two mesenchymal neoplasms, the mass in exam present some particular features.

First of all, the localization in anterior mediastinum was more typical of other kind of tumours like thymomas, embryonic neoplasms or lymphomas, than STF.

Secondly, the involvement of the sternum. The mass seemed to originate directly from the capillary pericytic cell of the sternum; rich vascularization of the mass and its continuity with the sternum, histologically confirmed, are both aspects confirming this classification.

In consideration of the location, the intraoperative features and the likely origin from the capillary pericytic cell of the sternum, this case could be a tumour closer to the definition of hemangiopericytoma differing from the SFT, representing a rare case of a mediastinal tumour.

Both hemangiopericytoma and SFT are considered “low malignant neoplasm” (7,8).

Considering the size, the site and the R1 resection in this case, a multidisciplinary group discussion was necessary. The final decision was a radiological follow up.

The first follow-up CT-scan showed no pleural effusion and no sign of recurrence in the mediastinum. At this time patient present an ECOG status 0 (Figure 4).

Under immunohistochemical, and histological point of view, a hemangiopericytoma is classified as the same tumor as an SFT. SFT is a rare mesenchymal neoplasm, that is usually located at the periphery of the chest or closed to the fissure, with the exclusion of the central areas of the thorax and without involvement of the bone structures.

In the described case we observed different characteristics; a tumour closer to the definition of hemangiopericytoma rather than the one of an SFT, presenting a rare example of a mediastinal tumour.

Subsequently this kind of neoplasms should be taken into account for the differential diagnosis of mediastinal masses with this aspect; in order to guarantee a proper and safe surgical approach.

Conflicts of Interest: All authors have completed the ICMJE uniform disclosure form (available at http://dx.doi.org/10.21037/ccts.2020.01.05). The series “Thoracic surgery without borders” was commissioned by the editorial office without any funding or sponsorship. The authors have no other conflicts of interest to declare.