Chylothorax is a rare complication of cardiothoracic surgery, and the cause is direct injury of the thoracic duct during surgery. Its incidence is higher with cardiac surgery than with thoracic surgery (1). Esophagectomy is the thoracic procedure most frequently associated with postoperative chylothorax (2). The treatment used for chylothorax depends on the amount of chyle in the thorax. However, traumatic chylous pericardial effusion is rare and even more dangerous than chylothorax because it may lead to cardiac tamponade. Mediastinal node dissection, while essential, can potentially damage the thoracic duct or pericardium in lung cancer surgery, although this is a rare occurrence. We experienced a rare case of chylothorax with cardiac tamponade that required pericardiocentesis and thoracic duct ligation. Herein, we present this case of chylous cardiac tamponade after lobectomy with mediastinal LN dissection in non-small cell lung cancer. We present the case in accordance with the CARE Guidelines.

A 54-year-old man was referred to our hospital for a growing mass in the right upper lobe (RUL). He was a nonsmoker, and he had no relevant personal or family medical history. Mixed ground-glass opacity (GGO), measuring approximately 1.8 cm, was identified by computed tomography (CT). The mass showed peripheral spiculation with a 1.4 cm solid portion in the central lesion of the RUL (Figure 1A). Primary lung cancer was suspected. Stage evaluation was performed, which included brain magnetic resonance imaging (MRI), bronchoscopy, and pulmonary function tests. According to positron emission tomography (PET), the maximum standardized uptake value (SUVmax) was 2.38 (Figure 1B). The clinical stage was T1bN0M0. Because of the central location of the mass, lobectomy was performed without tissue confirmation. 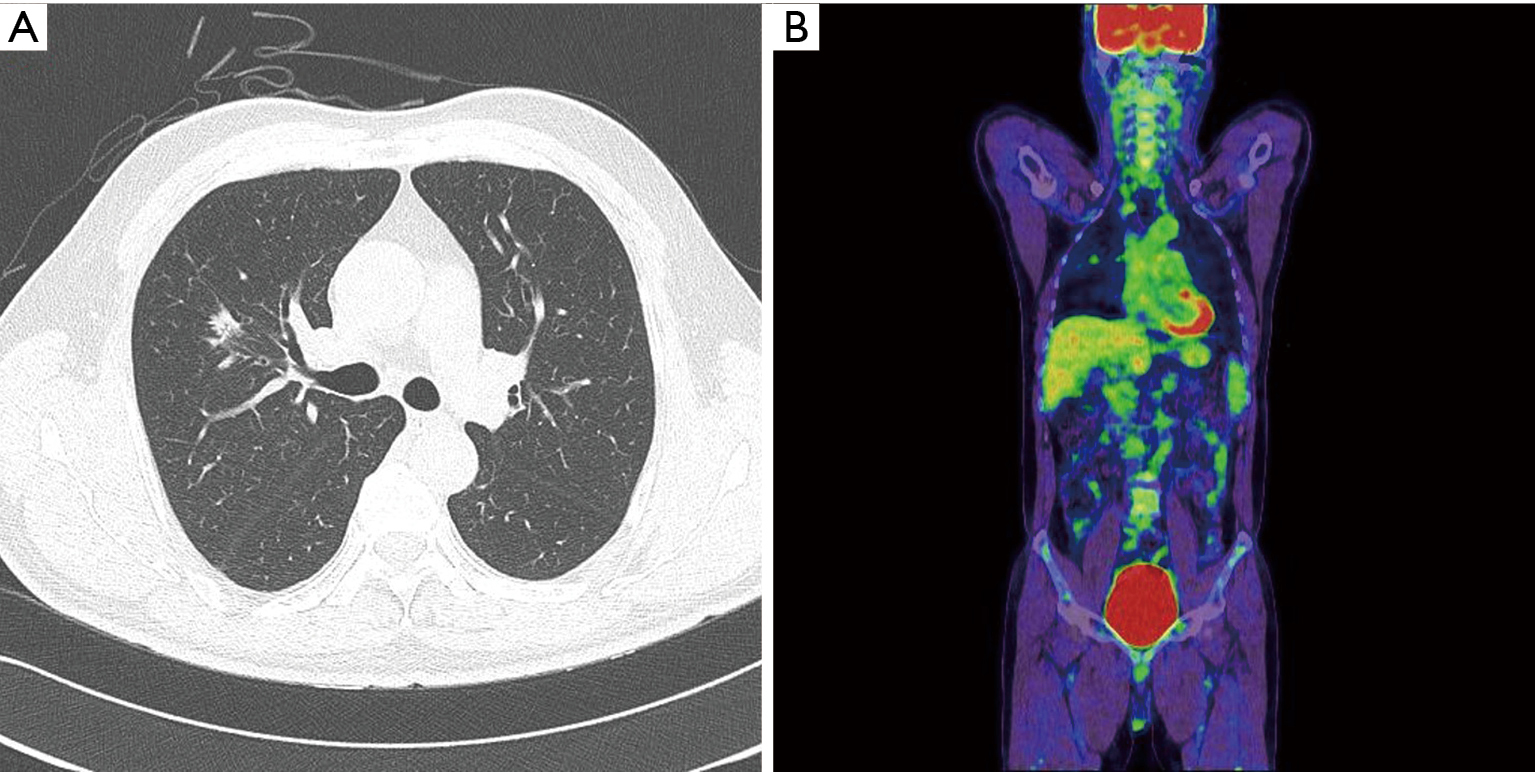 Under general anesthesia, the position of the patient was changed to the left lateral decubitus position. A skin incision 3–4 cm in length was made at the fifth intercostal space. The first step was dissection of the interlobar area to identify the arteries, including the posterior segmental artery of the RUL. The next step was the division of both sides of the fissures of the RUL before vessel division. The reasons for dividing both fissures before vessel division were to obtain a clear view of the vessel anatomy, to achieve the requirement of limited blunt dissection during vessel division, and to decrease the risk of bleeding. The anterior trunk was dissected starting from the azygos vein, and this artery was isolated and divided. Then, the vein of the RUL was dissected from the main pulmonary artery under thoracoscopic view, and the vein was easily dissected from the artery. After division of the vein, the posterior segmental artery was identified and divided. Finally, the bronchus of the RUL was divided after the removal of peribronchial LNs. Inferior ligament division was performed for upward lifting of the remaining lung tissue. Subcarinal LNs were removed, and upper mediastinal LNs were also removed (Video 1).

The patient was discharged on postoperative day 4 without any complications. He returned 1 week later after experiencing oozing from the removal site of the chest tube. Serous fluid was drained out, and the wound was closed. After 2 weeks, the patient was referred to the emergency department with mild dyspnea. Chest radiography showed an accumulation of fluid in the right pleural space. Chest CT revealed substantial pleural effusion with mild pericardial effusion (Figure 2). Closed thoracostomy was performed. Two liters of typical milky fluid were drained. Pleural fluid analysis was carried out, and the triglyceride level was 1,213 mg/dL. Thoracic duct ligation was recommended due to the large amount of chylothorax; however, the patient refused the operation. Conservative care was administered, and echocardiography was conducted. According to echocardiography, there was mild pericardial effusion with no functional abnormalities in cardiac function. On day 5 after readmission, because the daily drainage amount exceeded 500 cc, we again recommended surgery, and this time the patient agreed to the operation. However, that night, the patient experienced sudden hypotension (systolic pressure 70 mmHg) with severe agitation and sweating. Emergency echocardiography was performed, and cardiac tamponade was confirmed (Figure 3A). Emergency pericardiocentesis was performed, and 2 liters of pericardial effusion were drained (Figure 3B). The patient’s condition stabilized and he no longer experienced symptoms. Reoperation was performed the next day. Pericardial window and thoracic duct ligation were carried out (Video 2). Severe pleural adhesions were noted between the lower paratracheal region and the right lung that had induced cardiac tamponade. The patient was discharged on postoperative day 5 without any complications (Figure 4). 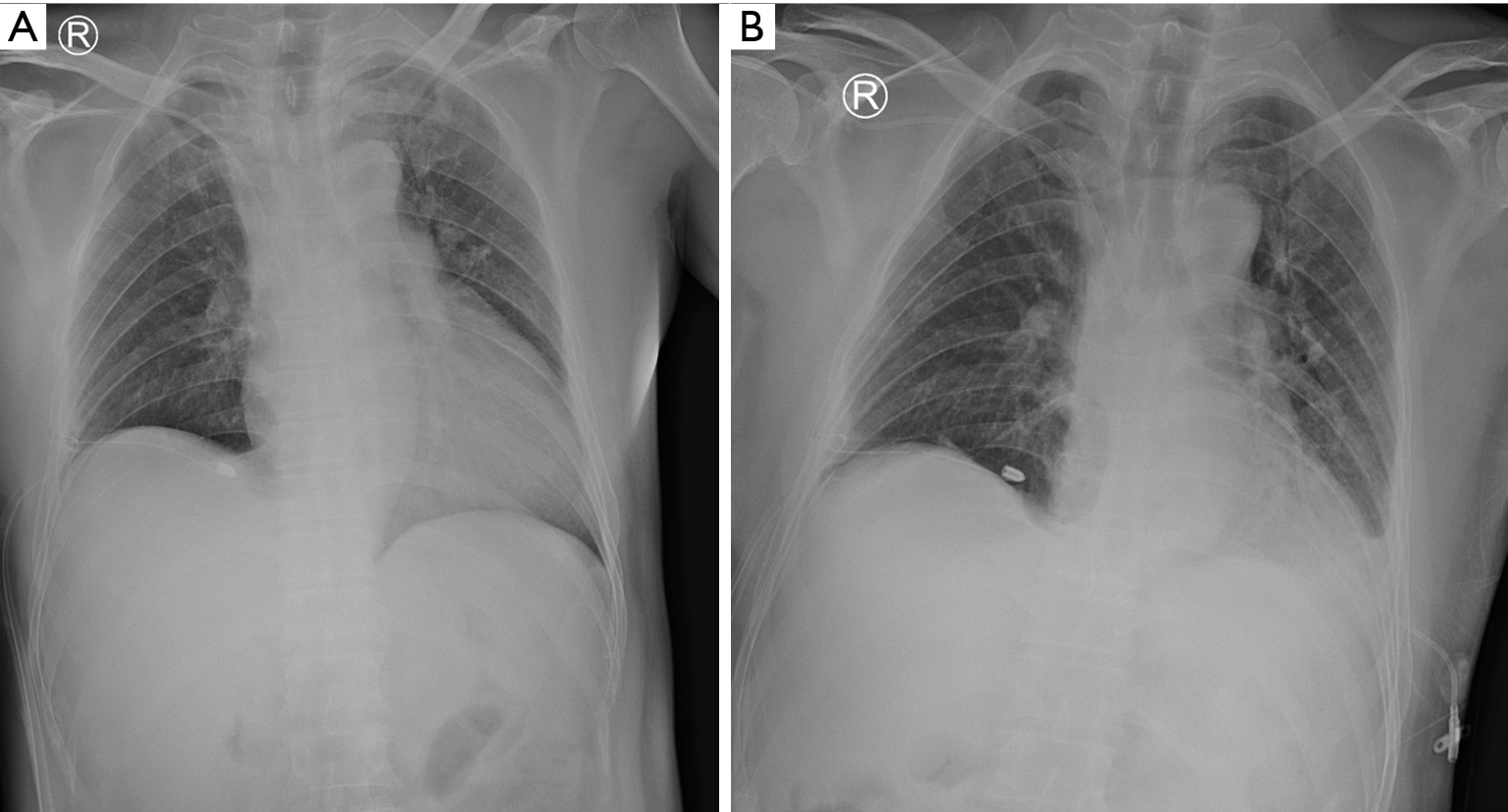 After 4 months, there was no fluid accumulation in the patient’s thorax or pericardium (Figure 5). 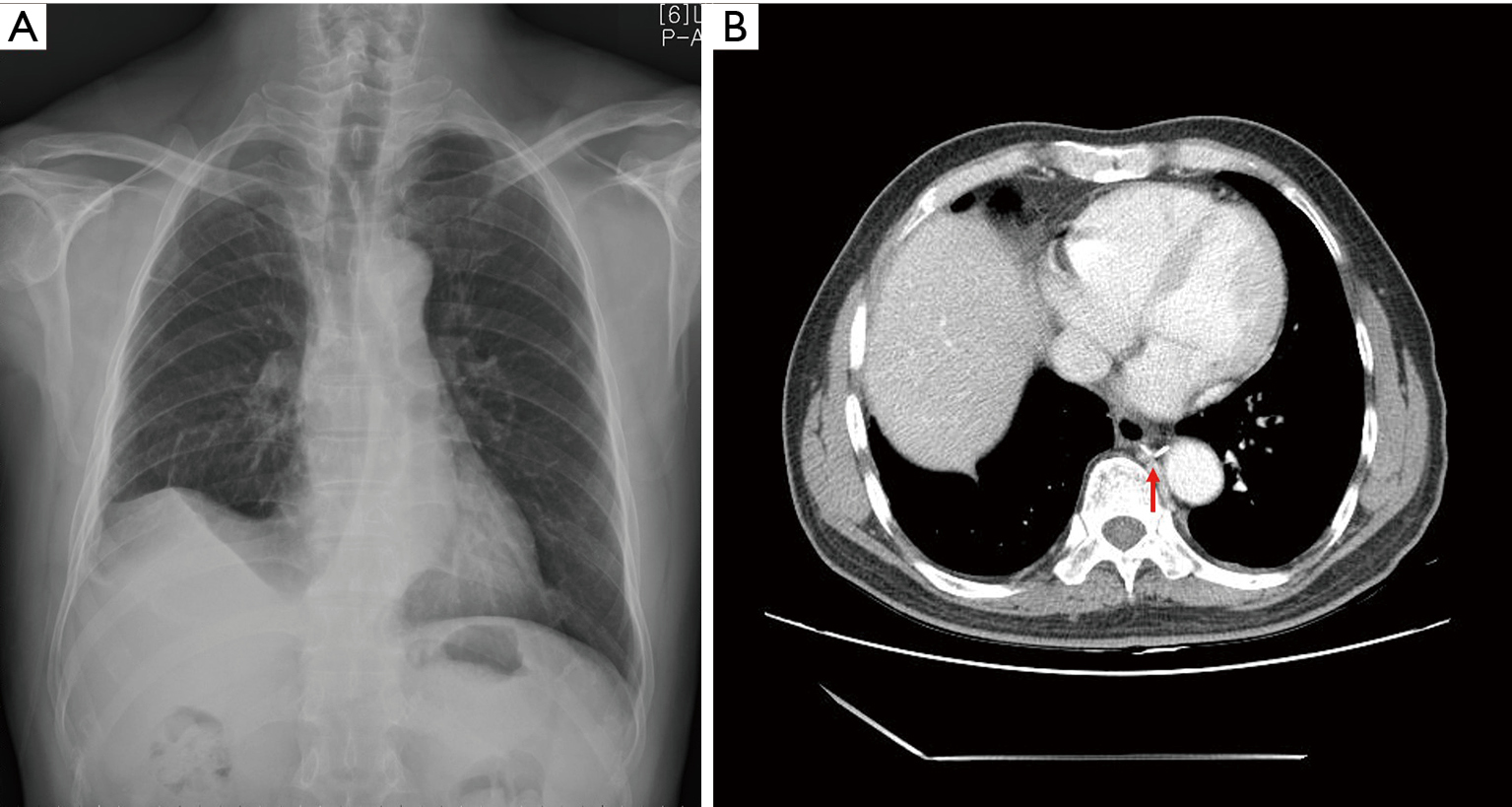 Figure 5 Follow-up chest radiography (A) and CT (B) showed no pleural effusion or pericardial effusion, and clipping of the thoracic duct was noted in the CT image (red arrow). CT, computed tomography.

Chylothorax is a rare complication that occurs after thoracic surgery, with an incidence of approximately 2%. Postoperative chylothorax has been reported to occur after various types of cardiothoracic surgery, including esophagectomy, mediastinal mass resection, and heart surgery. Chylothorax may occur after lung cancer surgery, and it most commonly accompanies mediastinal LN dissection (3). Postoperative chylothorax is caused by thoracic duct injury, which goes unrecognized by surgeons during surgery in the majority of cases.

In this case, uniportal lobectomy was performed. It may be argued that uniportal lobectomy introduces more complications than conventional thoracoscopic lobectomy. However, many thoracic surgeons have demonstrated that there is no difference between the two regarding complications (8). In our experience, no previous cases of chylothorax had been observed with the use of a uniportal procedure. We believe that this eventful condition arises from anatomical variations of the thoracic duct.

We identified pericardial injury and fluid accumulation in the lower paratracheal region during LN dissection. However, one limitation of this case is that we never recognized that the accumulating fluid was chyle, and the opening of the pericardium was not small, so we thought that the pericardial space was easily communicating with the pleural space. Later, as pleural adhesion progressed, the route of communication between the pericardial and pleural spaces was obstructed, and cardiac tamponade developed.

Conflicts of Interest: Both authors have completed the ICMJE uniform disclosure form (available at http://dx.doi.org/10.21037/ccts.2020.03.03). HWJ serves as an unpaid editorial board member of Current Challenges in Thoracic Surgery from Jan 2020 to Dec 2021. The other author has no conflicts of interest to declare.