Lung cancer continues to be the most common tumor-related cause of death. Within the scope of neoadjuvant therapy concepts for non-small cell lung cancer (NSCLC), the following grading of therapy-induced tumor regression was established over 20 years ago:

Recently, the International Association for the Study of Lung Cancer (IASLC) has also developed multidisciplinary recommendations for pathologic assessment of lung cancer resection specimens following neoadjuvant therapy. In these recommendations, major pathologic response (MPR) is defined as the reduction of viable tumor to the amount beneath an established clinically significant cutoff based on prior evidence according to the individual histologic type of lung cancer and a specific therapy. The historical definition of MPR for all histologic types of lung cancer is ≤10% of viable tumor with no viable tumor required for complete pathologic response (CPR) (6). The definitions of MPR and CPR therefore largely match those of regression grades IIb and III, respectively.

The histologic typing of lung tumors is based on the WHO classification of tumors of the lung, pleura, thymus and heart (7), currently in its 4th edition. In order to meet the requirements of current treatment options, it is necessary to perform the most precise histologic typing of NSCLC, even on (small) biopsies and cytological specimens. Typing as “NSCLC-NOS” (non-small cell lung cancer—not otherwise specified) should be avoided as far as possible by using complementary histochemical and immunohistochemical examinations (7,8).

According to the WHO classification, immunohistochemical confirmation of neuroendocrine differentiation is mandatory only for the diagnosis of large cell neuroendocrine carcinoma (7). Moreover, corresponding investigations as well as the immunohistochemical determination of the Ki67 proliferation index are recommended for all neuroendocrine lung tumors in order to reliably avoid differential diagnostic problems, e.g., in differentiating between small cell carcinoma versus lymphoma or artificially altered infiltrates of a typical carcinoid versus small cell carcinoma (8,9).

Since the first EGFR tyrosine kinase inhibitor for the treatment of EGFR-mutated pulmonary adenocarcinomas was approved in the EU in 2005, an increasing number of new drugs have been introduced, the application of which requires the performance of molecular diagnostics.

According to the current German S3 Guideline (8,9) and the ESMO Guidelines (10), molecular pathological investigations concerning EGFR (exons 18–21) and BRAF V600 mutations as well as ALK and ROS1 fusions are to be carried out for all non-curatively treatable non-squamous NSCLC and squamous cell carcinomas of never smokers or light smokers. In parallel to the molecular investigations, the extent of PD-L1 expression in all stage IV NSCLC should be tested and reported as tumor proportion score (TPS) (9). Due to a recent approval, the analysis of an NTRK (neurotrophic tyrosine receptor kinase) 1–3 translocation gains additional importance.

EGFR (epidermal growth factor receptor) represents a receptor tyrosine kinase whose dimerization leads to the activation of a signal transduction cascade with consecutively increased cell proliferation and angiogenesis as well as reduced apoptosis. In Europe, EGFR mutations are detected in 10–15% of non-squamous NSCLC, most often as a deletion in exon 19 or a point mutation in exon 21. A T790M mutation in exon 20 is the most common mechanism of resistance in the course of therapy with first or second generation EGFR TKIs (11).

The BRAF protein is a component of the MAP kinase signaling pathway. Mutations of the corresponding gene—most frequently V600E mutations—are described in up to 3% of NSCLC and cause an over-activation of this signaling pathway. In addition to a target for molecular therapy, BRAF mutations also include a mechanism of EGFR-TKI resistance.

ALK (anaplastic lymphoma kinase) translocations are also described in up to 3% of NSCLC. The most common is an EML4 (echinoderm microtubule-associated protein-like 4)-ALK fusion with formation of a new EML4-ALK gene (11).

The ROS1 receptor-tyrosine-kinase is encoded by the corresponding proto-oncogene. ROS1 gene rearrangements, which are detected in about 1% of NSCLC, promote their carcinogenesis by a not yet fully understood mechanism. CD74 is the most common ROS1 fusion partner (12).

Under physiologic conditions, PD-L1 (programmed cell death-ligand 1) is important for maintaining the homeostasis of the immune system in the healthy organism. But PD-L1 is also expressed on tumor cells of NSCLC with the aim to escape the immune system. Therapeutically, the physiologic immune response is reconstituted by means of anti-PD-1 or anti-PD-L1-antibodies (13). The extent of the PD-L1 expression is investigated by immunohistochemistry and reported as a tumor proportion score (TPS) (Figure 1). 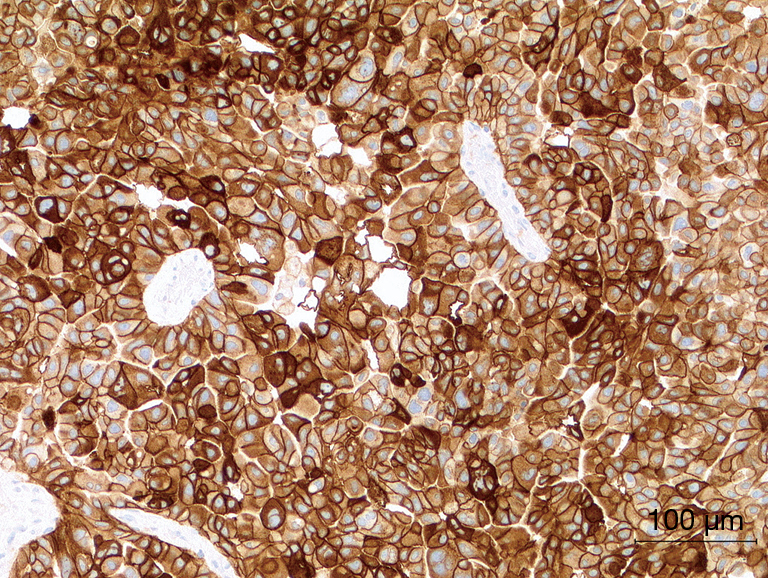 The genes NTRK 1–3 encode three tropomyosin receptor kinase proteins (TRKA, TRKB, TRKC). In about one percent of all solid malignancies, there is a NTRK fusion with expression of a chimeric protein, itself followed by a constitutively active, ligand-independent downstream signaling (14).

In September 2019, a TRK inhibitor was approved by the EMA (European Medicines Agency) for the treatment of locally advanced or metastatic solid tumors with NTRK gene fusion. This therapy is therefore also available for corresponding lung cancers.

In addition to the molecular changes described above, especially in the case of resistance to therapy, supplementary molecular investigations can be carried out with an expanded panel in order to offer the respective patients the possibility of therapy with drugs not approved for lung cancer or the participation in a therapy trial.

In summary, modern lung pathology increasingly requires molecular examinations with regard to specific therapy options in addition to exact histologic typing according to the WHO classification. In the context of neoadjuvant therapy concepts, the extent of therapy-induced tumor regression gains additional importance.

Conflicts of Interest: The author has completed the ICMJE uniform disclosure form (available at http://dx.doi.org/10.21037/ccts.2020.02.08). The Focused Issue “Thoracic Surgery Without Borders” was commissioned by the editorial office without any funding or sponsorship. The author has no other conflicts of interest to declare.

Ethical Statement: The authors is accountable for all aspects of the work in ensuring that questions related to the accuracy or integrity of any part of the work are appropriately investigated and resolved.