Surgical reconstruction of the sternum following cardiac surgery complicated by mediastinitis—implantation of a custom-made sternal implant: a case report

Mediastinitis represents a relatively uncommon but potentially life-threatening complication following a median sternotomy, with incidences ranging from 0.25–5% (1). It may result from direct haematogenous spread of bacteria or from the extension of infection from adjacent structures e.g., oesophagus, airways, lungs or head and neck (descending necrotising infection). Deep sternal wound infections by definition progress under the sternum and the anterior mediastinum, with a range of presentations from stable to critically ill. Diagnostic criteria has been described by the Centres for Disease Control and Prevention (CDC) (2) with signs and symptoms typically presenting within 30 days of cardiac surgery; whilst the predominant risk factors for its development include diabetes mellitus and obesity.

Figure 1 Summary of the key events during the patients care journey.

A year later, following a bout of sneezing, she reported a ‘popping’ sensation predominantly in her right rib cage; X-ray showed no obvious breakage or lung pathology. She developed chronic severe pain and audible crepitations of her ribs/clavicles, confounded by post traumatic stress disorder from previous surgery. Due to the lack of identification of a mechanical cause, and poor localisation, intercostal nerve blockade through cryoanalgesia was not feasible; therefore medical management was initiated (Zomorph and Pregabalin).

Due to suboptimal pain control the patient became wheel chair bound, with diminishing quality of life. Awareness of a novel management option in April 2018 led to the consideration for sternal reconstruction. The patient initially underwent debridement of sternum and placement of a temporary methyl methacrylate spacer; bridging the gap for the insertion of the custom titanium prosthesis. As a result of this debridement, tissue cultures returned the following:

The patients CT images were used by 4WEB in order to create the custom prosthesis, with input from the lead surgeons to adjust for specific intraoperative details, these included; fixation technique to the ribs and design of sternal body with a lightweight web structure. As a result, three custom implants were 3D printed (Figures 2-4); 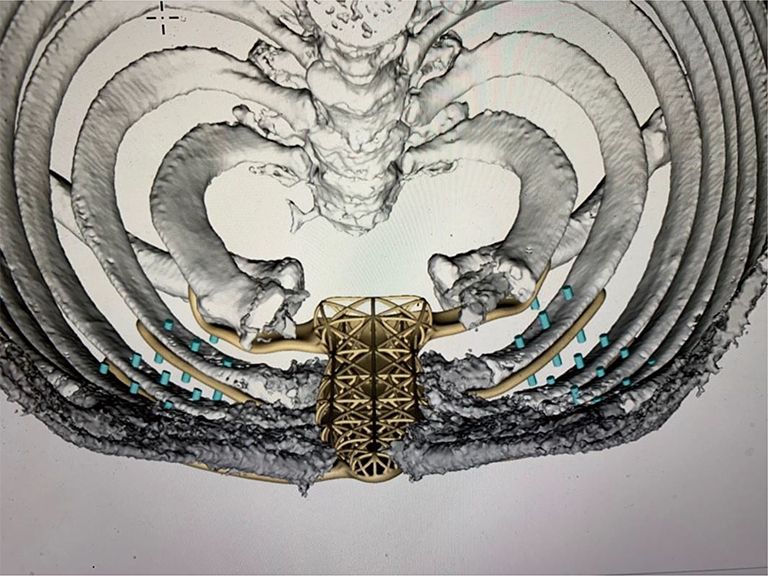 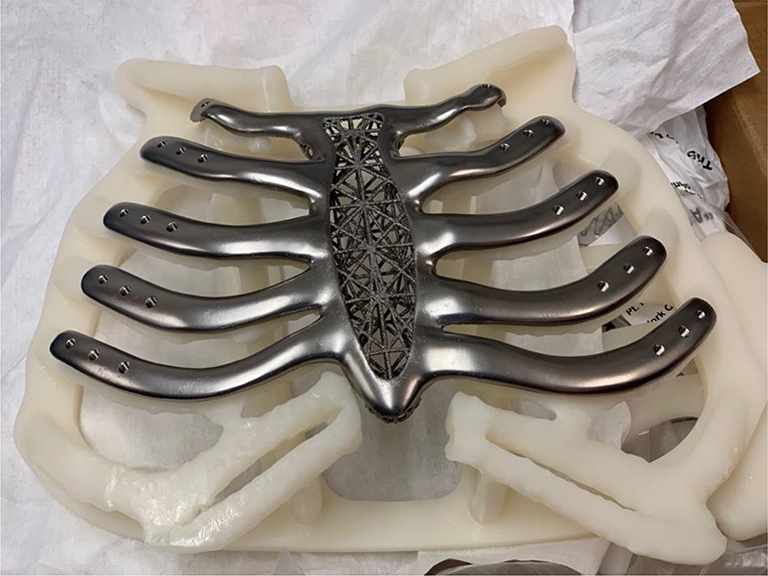 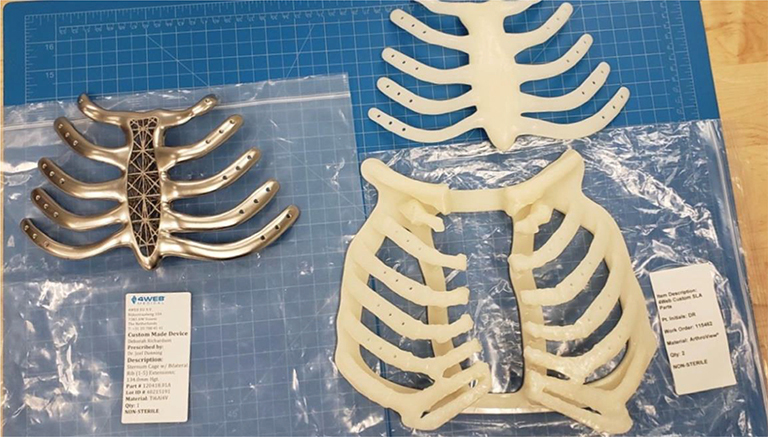 The procedure involved both orthopaedic and cardiothoracic surgical input. Proceeding with the reopening of the previous sternotomy scar with dissection of the pectoral muscles off the anterior chest wall, to allow for removal of the temporary implant. During which the plastic implant replica was utilised as a guide for dissection margins in preparation for final implantation.

Concurrently, bone marrow was harvested from the left femur, using the reaming, irrigation and aspiration (RIA) technique, under fluoroscopic guidance. The marrow was later utilised to seed the central web structure of the implant, along with Cerament G (Bonesupport, Sweden) pellets. Cerament G is a gentamicin-loaded calcium sulphate/hydroxyapatite biocomposite. The gentamicin elution is reliable and consistent and has a high initial peak that remains above the minimum inhibitory concentration (MIC) for gentamicin sensitive Staphlococcus Aureus and Pseudomonas aeruginosa for at least 28 days in in vitro studies (3).

Following removal of the temporary methyl methacrylate spacer, six tissue samples were taken from the remaining sternum/surrounding tissue and sent for culture and sensitivity. The samples are taken using clean forceps and blade for each and if 3 or more are subsequently positive for bacterial growth, infection is still present. Our patient had 3 positive cultures for Staphlococcus epidermidis and therefore our Infectious Diseases Department was involved to start the appropriate antibiotic regime.

Final placement of the titanium prosthesis was trialled following adequate debridement utilising the guide prosthesis. Minor adjustments were subsequently made in order to bed the prosthesis down sufficiently on the patients’ anterior chest wall. Initially pericostal sutures were utilised prior to the placement of 6–8 non-locking screws. Definitive fixation proceeded with locking screws, each sized based upon adequate depth penetrance through the rib, achieving bicortical fixation, whilst minimising the risk of pleural or pericardial damage.

Finally, the mobilised pectoral muscles were sutured medially as a muscle flap, fixing them to the previously placed rectus abdominis flap. Following which, mediastinal, left and right anterior 18 French with handivac chest drains were inserted.

The patient remained as an inpatient for 7 days following surgery; in order to monitor her post-operative course and maintain appropriate analgesia where necessary. By day 2 post-operatively she was mobilising, and the drains were removed on day 3 (Figure 5). The intra-operative sternal samples demonstrated positive bacterial growth; which subsequently led to the patient being placed on antibiotics for 6 weeks post-operatively. 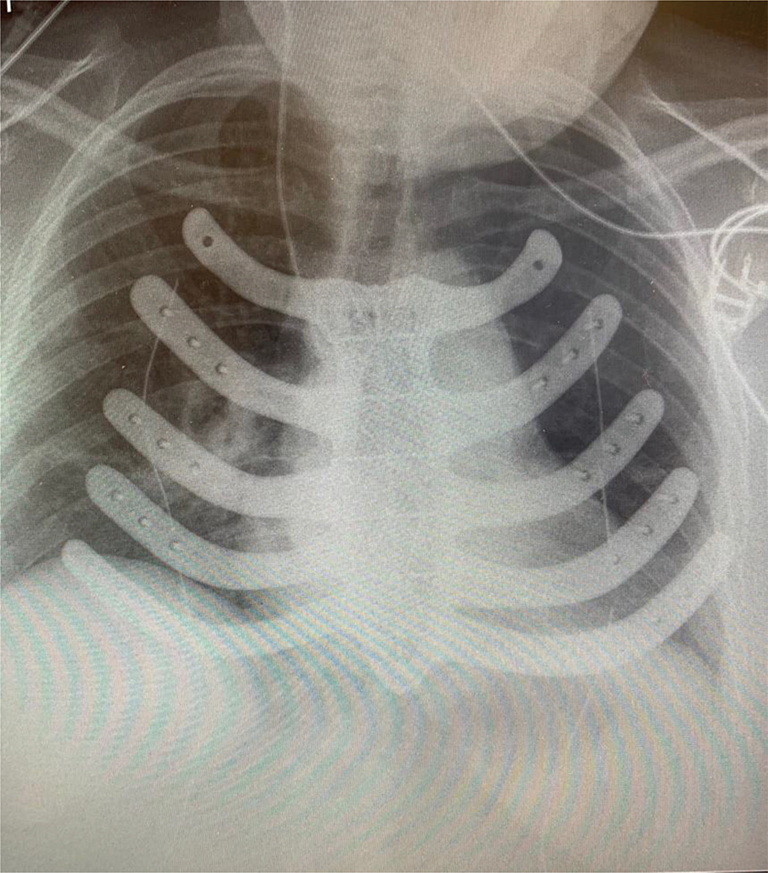 She was very happy with the improvement of her preoperative pain and her walking distance was improving daily. Unfortunately, she died 3 weeks postoperatively from a myocardial infarction due to her underlying cardiac disease.

Definitive management options may involve an array of techniques, depending upon the severity of the infection. The general principles of management aim to bring the infection under control, via removal of all infected/necrotic tissue and foreign material alongside appropriate antimicrobial therapy (4), with subsequent restabilisation of the sternum. Antibiotics remain the initial management option following identification of mediastinitis, with expeditious intravenous (IV) broad spectrum antibiotics recommended. The regimen is subsequently adjusted according to microbial identification and corresponding susceptibilities, as well as dose adjustment for body mass index (BMI) and skeletonised internal mammary grafts, particularly bilateral, to account for reduced sternal and peristernal penetrance (1,2).

Surgical intervention is generally necessary, with wound debridement as a minimum, with more extensive measures employed in a stepwise manor. However, there remains a lack of consensus for optimal surgical management. Generally, two overall closure methods are stated in the literature; primary intention or tertiary intention (delayed primary closure); with subsequent reconstruction if required. Adjuncts to these close techniques include open wound dressings, or closed irrigation with added antibiotics. Topical negative pressure therapy (TNP) may also be used as an adjunct to closure, or as a bridge to surgical management/reconstruction (2,5). The literature suggests that earlier diagnosis and instigation of TNP predicts greater likelihood of survival (2). Conversely, studies have suggested that prolonged TNP can result in chronic infection (2,5).

The timing and type of intervention may be guided via the AMSTERDAM classification as describe by van Wingerden et al. (2) (Table 1). 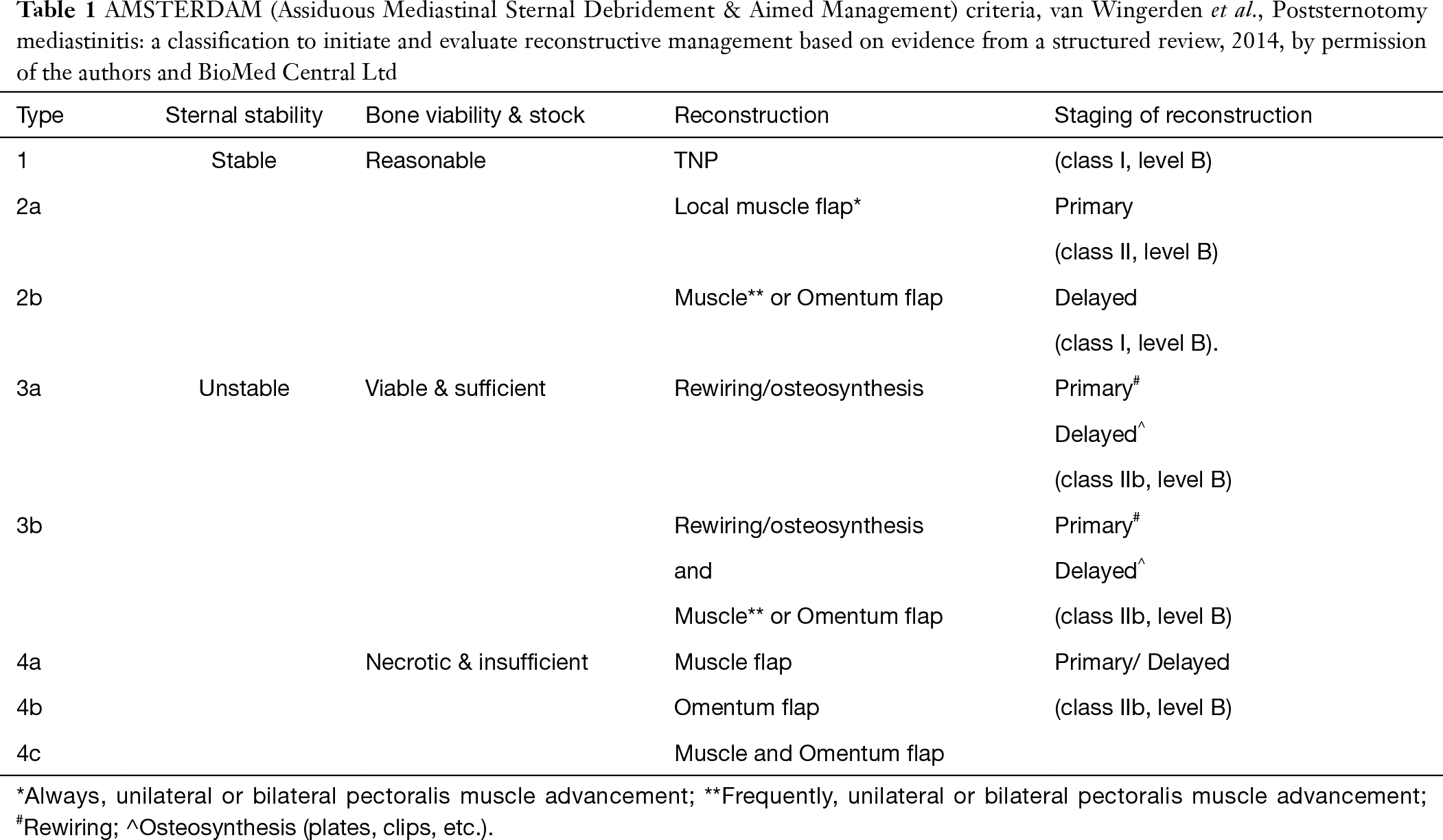 If sternal instability remains or there is defective thoracic mechanics, fixation may be required to stabilise the anterior chest wall. Many options have been described, utilising an array of prosthetic materials;

Regardless of the technique used to achieve sternal stability, tissue coverage is most often required to reduce any dead space and providing protection to underlying structures from the exposed sternal parts. Pedicled soft tissue flaps are frequently required to fill the sternal defects or wounds following debridement, as they represent effective reconstruction options due to their highly vascular nature, whilst. Examples include;

Mediastinitis represents an uncommon, but potentially life-threatening complication following median sternotomy. There remains a lack of consensus regarding the optimal approach for sternal reconstruction, should this be required. The timing and type of intervention may be guided by the AMSTERDAM criteria. However, this does not address the potential need for reconstruction. 3D printing of a custom prosthesis offers a novel and effective approach to full reconstruction; maintaining pulmonary mechanics and stability of the anterior chest wall. After reflection about this case the senior authors may revise future sternal replacements in patients with significant co-morbidities. Instead of the web design for ingrowth of bone, a solid implant will be considered as this would mean that bony ingrowth is not required, and this burden of healing removed.

Conflicts of Interest: All authors have completed the ICMJE uniform disclosure form (available at http://dx.doi.org/10.21037/ccts.2020.02.01). The authors have no conflicts of interest to declare.