A rare case of hepatoid adenocarcinoma in the lung and literature review: case report

Hepatoid adenocarcinoma of the lung (HAL) is an extremely rare malignant tumor originating from the lung with both hepatocellular carcinoma and adenocarcinoma-like characteristics. The tumor cells can secrete molecules such as alpha-fetoprotein (AFP), HepPar1, HEA125 and MOC31. This disease occurs mostly in patients over 50-year-old and is more common in men who have a smoking history (1). Usually, there is no specific clinical symptoms, most patients are not diagnosed until advanced stage and have poor prognosis. Because of the extremely low incidence and strong tumor heterogeneity, so far there is still no uniform treatment guideline of HAL. We are reporting a case of HAL, and also review the literature to further study the clinicopathological features, immunophenotype, diagnosis, treatment and prognosis of this disease. We present the following case in accordance with the CARE Guideline (2).

The patient was a 67-year-old man who presented with a right lower lobe lung mass. He had no symptoms such as cough, chest discomfort, chest pain or hemoptysis. He had a history of hypertension for more than 10 years, but no history of smoking, hepatitis, or other tumor. No positive signs were found in physical examination. Computed tomography (CT) examination showed an irregular 4.1 cm × 3.5 cm mass in the right lower lobe with uneven enhancement and faint edge. There was bilateral pleural thickening and the hilar and mediastinal lymph nodes were not enlarged. Abdominal CT showed no tumor in the liver (Figure 1A). Emission computerized tomography (ECT) showed no evidence of bone metastasis (Figure 1B). Positron emission tomography (PET)-CT showed abnormal fluorodeoxyglucose (FDG) metabolism in the right lower lobe mass (SUVmax =19.02). The FDG metabolism of right hilar lymph nodes was increased (SUVmax =3.82) considering the possibility of metastasis. The mediastinal lymph nodes and the rest of the body showed no significant abnormal increase in FDG (Figure 1C). Laboratory examination: AFP: >2,000 ng/mL, CY211: 4.63 ng/mL, liver function was normal. 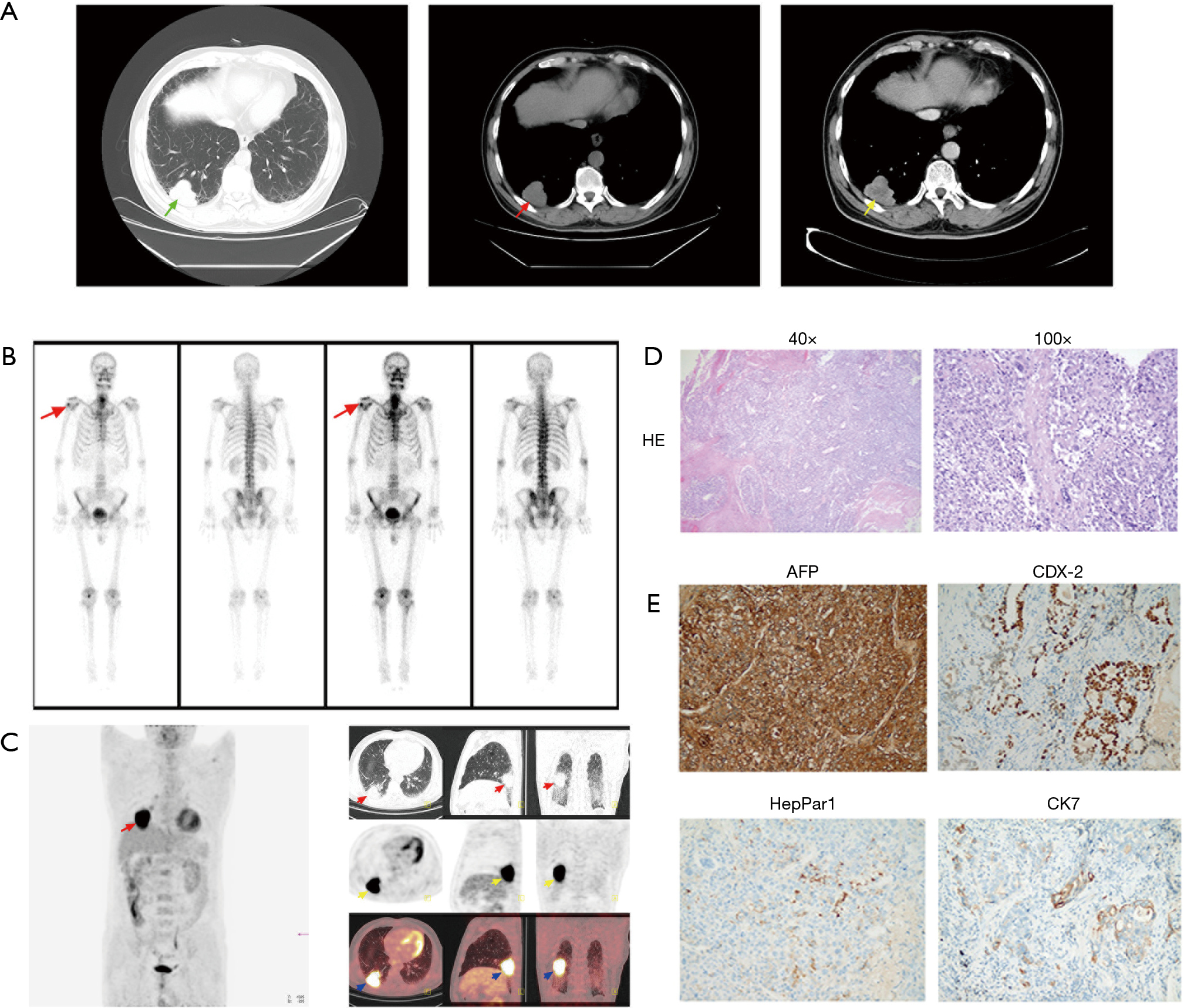 The patient underwent video-assisted thoracoscopic surgery (VATS) right lower lobe resection and lymph nodes dissection (stations 2, 7, 10, 11) on 06-27-2018. Postoperative pathology demonstrated a 5.5 cm × 4.0 cm × 3.8 cm poorly differentiated adenocarcinoma of the right lower lobe with local necrosis but no lymph node metastasis. There was no vascular tumor thrombus and no invasion of the nerve. The bronchial margin was negative, and the pleural surface of the tumor was close but not involved by the cancer (Figure 1D). Immunohistochemistry results: AFP(+), CDX-2(partial +), CK7(small +), CK20(individual +), HepPar1(small +), ALK(−), P40(−), PE10/SPA(−), NapsinA(−), CK5/6(−), Syn(−), CgA(−), PLAP(−), CD30(−), CD56(−), CD117(−), Vimentin(−), P63(−), TTF-1(−), considering poorly differentiated cancer with hepatic differentiation (Figure 1E). The patient was discharged a week after surgery with no complications. He received adjuvant chemotherapy (Docetaxel 100 mg D1 + Nedaplatin 100 mg D2 for six sessions) with no adverse events. Two months after surgery, the level of serum AFP declined to normal. The patient received regular outpatient follow-up and no local recurrence or distant metastasis was found after 18 months and the serum AFP level remained within the normal range.

HAC is a rare malignant liver-like tumor that occurs outside the liver. It is similar to hepatocellular carcinoma in morphology and has adenocarcinoma-like characteristics. The tumor can occur in various organs. Metzgeroth et al. reviewed the clinical features of 261 cases of HAC and found that the most common site of HAC was stomach (63%), and other sites included ovary (10%), lung (5%), gallbladder (4%), pancreas (4%), and uterus (4%) (3). Primary HAL are extremely rare and the origin of HAL remains unclear. Ishikura et al. thought that HAL most likely originate from ectopic hepatocytes or germ cells in the lung tissue and respiratory epithelium during embryonic development (1). Some lung cancer cells may differentiate into hepatocytes which then develop into HAL. Saka et al. considered this disease to be an intrapulmonary manifestation of extragonadal germ cell cancer syndromes (4). Sinard et al. believed that hepatocytes have abnormal differentiation in other parts of the body outside the liver leading to HAC (5).

HAL usually occurs at the older age (over 50 years old) male with history of smoking. Our case presented here was an elderly male patient with no history of smoking. Most of the patients with HAL were in advanced stage with elevated serum AFP levels (Supplementary: Discussion). In this case, the preoperative AFP level was >2,000 ng/mL and declined to 1,180.12 ng/mL 1 week after surgery. Two months later, the AFP level became normal. The cut surface of the gross specimen was gray or gray-brown, with clear boundaries. The central necrosis composed of hepatic-like differentiation zone and non-hepatic-like differentiation zone, and the hepatic-like differentiation zone cancer tissue was nested and beam-like. The cancer cells were large, polygonal, rich in cytoplasm, eosinophilic or transparent, with PAS-positive small body. The nucleus was large, dark staining and in abnormal shape. The interstitium could appear more sinusoids and often have necrosis. Non-hepatic-like differentiation areas could be seen in adenoid and papillary structures, and a few areas were poorly differentiated adenocarcinoma-like changes.

Ishikura et al. reported in 1990 that HAC can be diagnosed when a typical alveolar or papillary adenocarcinoma and a component similar to hepatocellular carcinoma are observed and AFP is expressed (1). However, with the increased number of cases reported, we found that AFP is not always expressed in HAC. Therefore, it is necessary to use other specific molecules for immunohistochemical staining to assist diagnosis. HepPar1 is a relatively specific hepatocyte marker, and it has no obvious crossover with other tumors. Immunostaining of CK molecules also contributes to the diagnosis of HAC. Study reported that CK18 is positive in HAL, while CK20 is negative, and CK7 staining may be positive or negative (6). In this case, AFP(+), CDX-2(partial +), CK7(small amount +), CK20(individual +), and HepPar1(small amount +) were observed, and were similar to those reported in the literature. In summary, we believe that the diagnosis of HAL should mainly rely on the morphological similarity to hepatocellular carcinoma, combined with immunohistochemical markers AFP, hepatocyte, CK18 and other positively expressed molecules, and excluded by clinical pathology and immunohistochemistry metastasis of diseases such as hepatocellular carcinoma.

So far, there is no standard treatment scheme for HAL. Surgical resection, adjuvant chemotherapy and radiotherapy are common choices for the treatment of this disease (7). In recent years, molecular targeted therapy has also been shown to have some curative effect (Supplementary: Discussion). Khozin et al. reported the first case of treatment of HAL with the tyrosine kinase inhibitor crizotinib, resulting in a reduction in tumor volume (8). Gavrancic et al. recently reported the use of platinum combined with sorafenib in the treatment of a patient with stage IV HAL and achieved partial remission with stability lasting for 11 months, this was the longest survival for patients with stage IV HAL (9). Basse et al. reported that immunotherapy was used for HAL, although programmed death ligand 1 (PD-L1) was negative in this patient’s tumor cells and immune cells. The patient did have a partial response to immunotherapy, but unfortunately, the patient eventually died of infection (10).

Previous studies have shown that the prognosis of HAL is poorer than other types of lung tumors. However, if the disease is found early and the tumor is small, the prognosis could be good after complete surgical resection (9). In our case, the tumor stage was (pT3N0M0, IIB), with no lymph nodes metastasis, no vascular and neural invasion, but the degree of tumor differentiation was poor. After lobectomy with adjuvant chemotherapy, there was no local recurrence or distant metastasis and the serum AFP level remained within the normal range 18 months after surgery.

Our case report has some strengths as follows: on one thing, our patient has survived with no disease relapse or progress for 18 months, this is a pleased prognosis; on another thing, the pleased prognosis may owe to our adjuvant chemotherapy formula. However, there is limitations in our report, we need perform regular outpatient follow-up and present the natural course of HAL

HAL is a rare malignant tumor originating from the lung with hepatocellular carcinoma and adenocarcinoma-like characteristics and has a poor prognosis. The diagnosis of HAL should mainly rely on the morphological characteristics combined with immunohistochemical markers. There is no standard treatment scheme of HAL. Early diagnosis and aggressive treatment can result in long-term survival. Nevertheless, more case reports and further studies are required to explore for treatment of this rare disease. 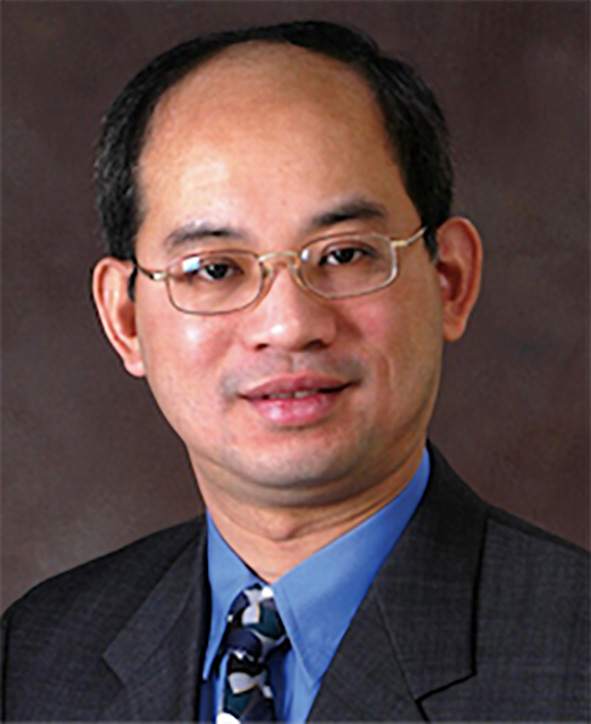 Dr. Hon Chi Suen (Hong Kong, China): Dr. Wang and colleagues reported a rare lung tumor hepatoid adenocarcinoma and reviewed the literature on this unusual pathology. Could you tell us if there are any features before surgery that may lead the physician to suspect this rare disease?

Dr. Suen: Are there any molecular studies that can help find good targeted therapy for this tumor that has poor prognosis?

Dr. Wang: Molecular targeted therapy has been shown to have some curative effect. Khozin et al. reported the first case of treatment of HAL with the tyrosine kinase inhibitor crizotinib, resulting in a reduction in tumor volume. Gavrancic et al. recently reported the use of platinum combined with sorafenib in the treatment of a patient with stage IV HAL and achieved partial remission with stability lasting for 11 months. Basse et al. reported that immunotherapy was used for HAL, the patient did have a partial response to immunotherapy. We believe that with the deepening of molecular mechanism research, the therapeutic targets of HAL will increase and eventually improve the prognosis of patients.

Conflicts of Interest: All authors have completed the ICMJE uniform disclosure form (available at http://dx.doi.org/10.21037/ccts.2020.02.04). The authors have no conflicts of interest to declare.