Electronic cigarettes (e-cigarettes) are devices that heat liquid in prefilled cartridges which results in an aerosol or vapor that can be inhaled. Traditionally these cartridges contained nicotine and were promoted as a safer alternative to conventional cigarette smoking and a potential path for smoking cessation (1). Recently, vaping of the cannabinoid tetrahydrocannabinol (THC) has been seen especially among young adults. While cannabinoids are characterized as having anti-inflammatory properties, derivatives such as cannabidiol (CBD) have exhibited pro-inflammatory properties in the lungs of mouse models (2). Despite their rapid rise in popularity several reports have linked e-cigarette use to lung disease. We present a case series of four young, healthy patients with vaping exposure who were treated for respiratory failure along with a review of their corresponding pathologies. The cases are presented in accordance with the CARE guideline.

The first case is a 34-year-old male with history of childhood bronchitis who presented with progressive shortness of breath, fever, and malaise. He was employed as a restaurant manager. He had a remote history of polysubstance abuse including cigarette use for 10 years. One year prior to presentation he had transitioned to e-cigarettes. He used Juul nicotine products and reported 40–60 puffs per day.

On admission, he was afebrile and had an oxygen saturation of 80% on room air. He was started on high flow nasal cannula with improvement in his saturation levels. Computed tomography (CT) scan of his chest showed bilateral interstitial infiltrates with bibasilar consolidation (Figure 1). Echocardiogram did not reveal any valvular insufficiency and showed normal function. Blood, urine, and sputum cultures were negative for microorganisms. A lung biopsy was performed which showed predominantly organizing pneumonia, with mild to focally moderate inflammation, focal collections of airspace foamy macrophages, and few areas with airspace fibrin (Figure 2A,B,C). Acute bronchiolitis and granulomas were not observed. The patient was started on methylprednisolone 40 mg PO q 8 hours, and was discharged on hospital day 7 with maintenance therapy of 40 mg prednisone twice a day and trimethoprim/sulfamethoxazole for Pneumocystis pneumonia prophylaxis. He was seen at two weeks from discharge and reported being back to baseline function. 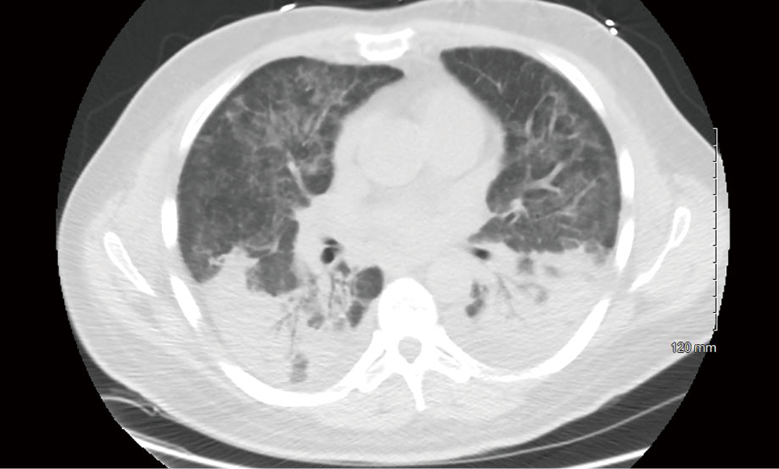 The second case is a 24-year-old female with no significant past medical history who presented with progressive shortness of breath, fever, malaise, and emesis. She was employed as a waitress. She used Black Box marijuana e-cigarettes which she procured on the internet and reported 10–120 puffs per day. On admission, she was afebrile and profoundly hypoxic. The patient was intubated but continued to be profoundly hypoxic despite ventilator support. Due to worsening hypoxia, extracorporeal circulatory membrane oxygenation (ECMO) was instituted. A CT of the chest showed bilateral interstitial infiltrates with bibasilar consolidation (Figure 3). An echocardiogram did not reveal significant valvular insufficiency, showed normal left ventricular function, but the right ventricle was moderately to severely hypokinetic. Cultures of blood, urine, and sputum were sent and were negative. The presumed diagnosis was aspiration pneumonia related to a recent outpatient procedure which required conscious sedation; however, on hospital day 7 the patient’s boyfriend, an e-cigarette user (see our patient #3), was admitted with similar pulmonary symptoms and his lung biopsy showed findings somewhat similar to our first case. At that point, she was started on 100 mg of IV methylprednisolone daily. She was de-cannulated after 14 days of ECMO and eventually discharged on hospital day 23. 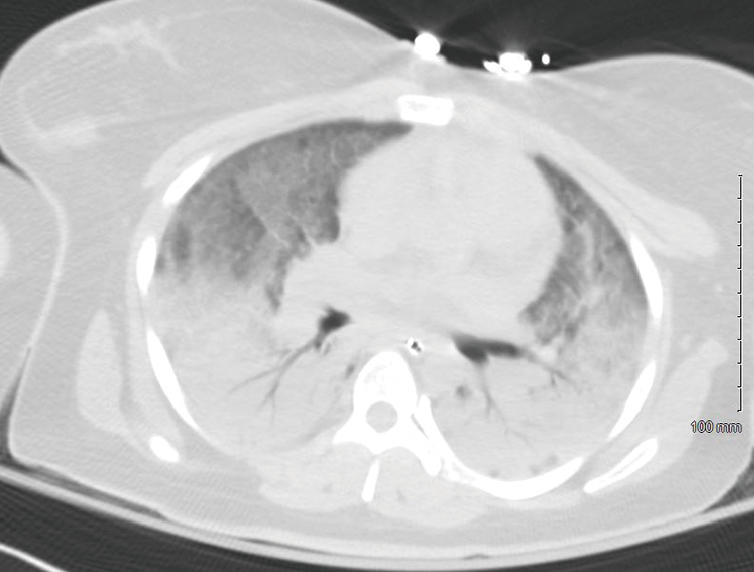 The third case is a 24-year-old male with a past medical history of gastroesophageal reflux disease and anxiety who presented with progressive shortness of breath, fever, malaise, and emesis. He was employed as an arborist. He used Orion nicotine products as well as Black Box marijuana e-cigarettes, which he procured on the internet, and reported smoking throughout the day on a daily basis. On admission he was febrile and significantly hypoxic. The patient required intubation due to worsening hypoxia. CT of the chest showed bilateral interstitial infiltrates with bibasilar consolidation (Figure 4). Echocardiogram revealed trace tricuspid regurgitation, trace mitral regurgitation, and normal ventricular function. Cultures of blood, urine, and sputum were sent and eventually returned negative. A lung wedge biopsy showed an acute fibrinous and organizing pneumonia (AFOP) pattern of injury consisting of a patchy distribution of intra-alveolar balls of fibrinous exudate associated with few neutrophils and only rare foamy macrophages, as well as scattered fibroblastic plugs within air spaces. (Figure 5A,B,C). Intraoperative pictures are shown in Figure 6. The patient was started on 125 mg of IV methylprednisolone. He was discharged home on hospital day 9 with maintenance therapy of 60 mg prednisone daily and trimethoprim/sulfamethoxazole for Pneumocystis pneumonia prophylaxis. He was seen at two weeks from discharge and reported being back to baseline function. 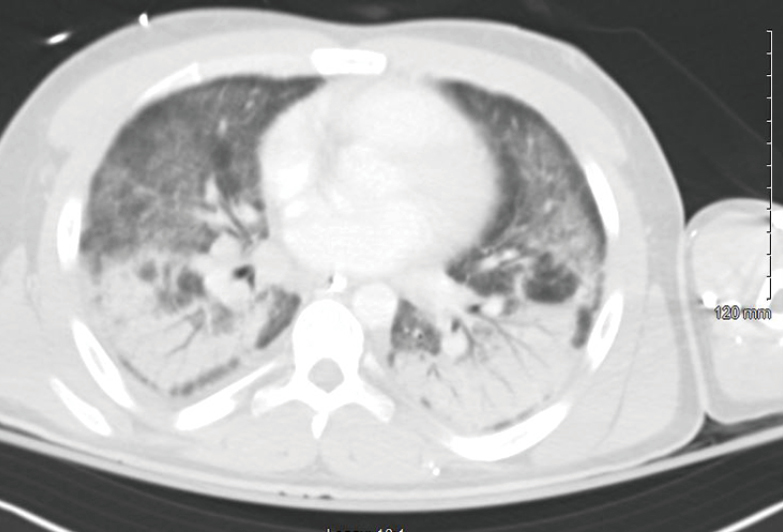 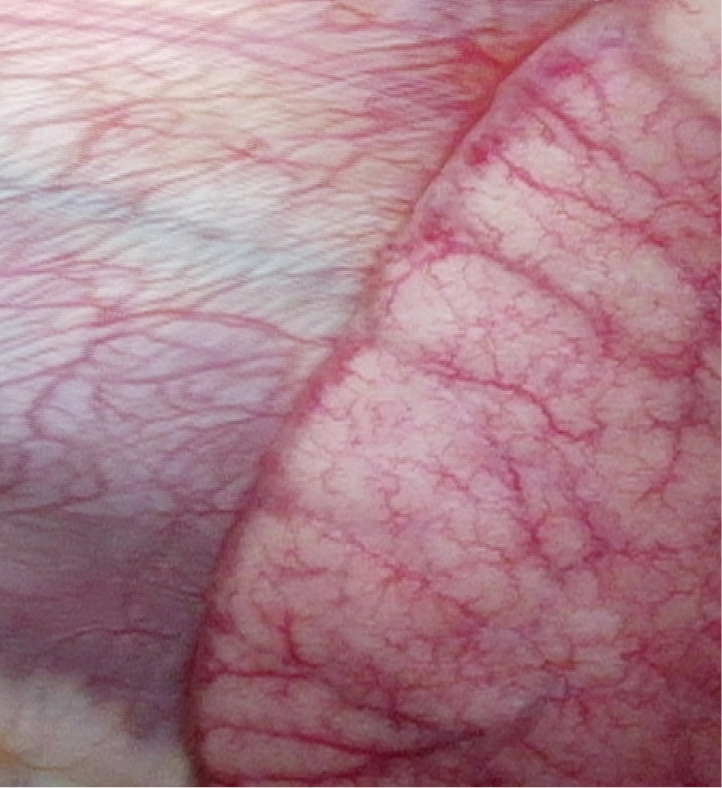 The fourth case is a 20-year-old female college student with a past medical history of migraines who presented with worsening shortness of breath, cough, nausea and diarrhea for four days. She used e-cigarettes for two years with an increase from occasional use to daily in the month prior to presentation. She used a “Kind” pen with marijuana “smart card” refills, and reported 10–12 puffs per day. On her initial presentation to the emergency department she was diagnosed with community acquired pneumonia and sent home on Azithromycin. She returned 4 days later with fever, hypoxia and severe dyspnea. She was also noted to have leukocytosis. Her chest CT showed bilateral lower lobe infiltrates and she was treated with Vancomycin and Ceftriaxone. She became progressively more hypoxic and was intubated. Methylprednisolone 1,000 mg daily was started, and her hypoxia improved. An infectious work-up was negative. She underwent lung biopsy which showed findings in keeping with AFOP (Figure 7A,B). She was discharged on day 8 on a prednisone taper. 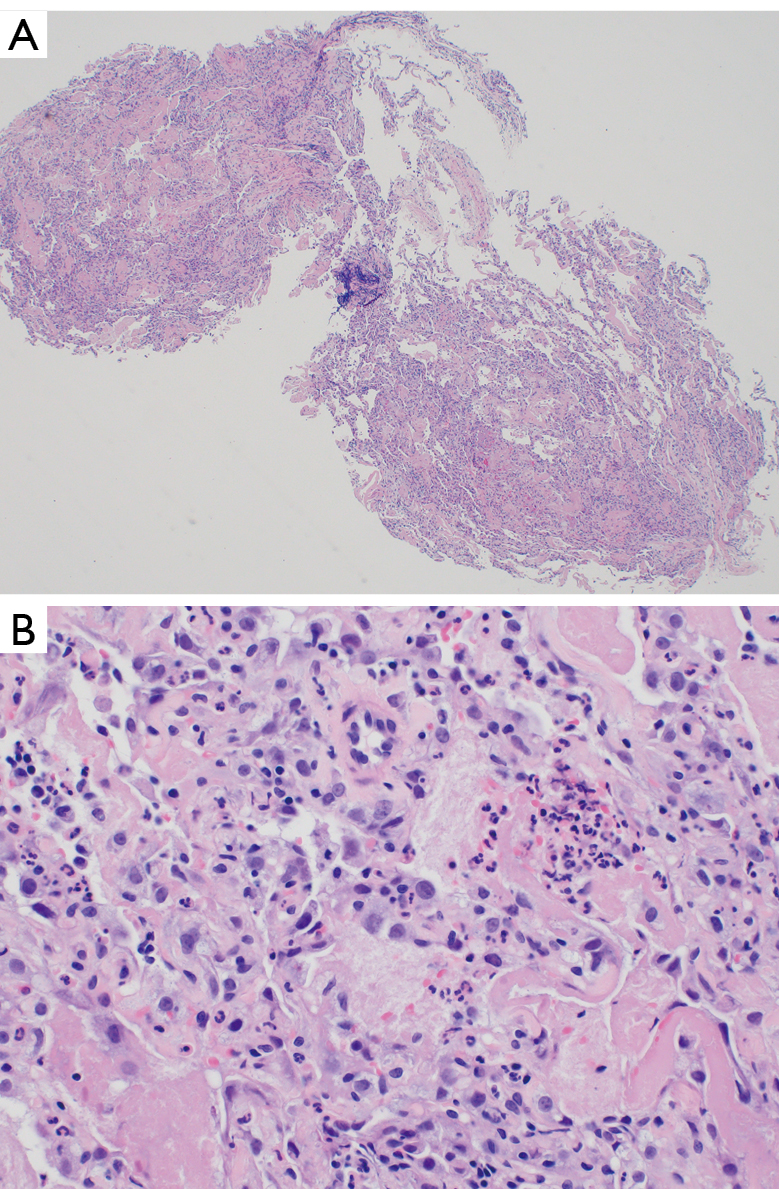 In the United States, e-cigarettes have become a multi-billion dollar industry, with $2.5 billion in sales in 2014 (3). The highest rates of use are reported in the 18–24 age group (4); however, the most rapid increase in use has been among adolescents. Between 2011 and 2015 the rate of e-cigarette use among high school students has risen 10-fold (5). Part of the rapid expansion in use is the perceived notion that e-cigarettes are “safe.” This designation however is not validated and necessarily true.

The lithium batteries that power these devices are susceptible to explosions and fires (6). Repeated heating cycles of the coil and wick components of the atomizer can lead to traces of metals such as nickel, chromium, and aluminum to leach into the e-liquid (7). Short term toxicity of inhaling fumes containing metal mixtures has been well appreciated in welders and is known as “metal fume fever” (8). E-liquids are composed of varying ratios of vegetable glycerin (VG), propylene glycol (PG), nicotine, and flavoring agents. Both VG and PG have been designated as “generally recognized as safe” (GRAS) by the FDA for oral intake; however, this designation does not apply to aerosolization. Long-term controlled studies looking at the effects of inhaling heated aerosolized VG or PG in humans are not available. Furthermore, flavoring components which may be an important motivator for e-cigarette use, especially in young consumers, historically has been linked to development of life-threatening respiratory failure (9).

Evidence of pulmonary toxicity from e-cigarette use in humans includes several studies that suggest an increased risk of chronic bronchitic symptoms, increased airflow resistance, decrease in exhaled nitric oxide suggesting increase in oxidative stress, and decreased cough sensitivity (10-12). Additionally, several case reports have recently drawn attention to the potential relationship between e-cigarette use and severe pulmonary disease. This has prompted a recommendation from the CDC (Centers for Disease Control and Prevention) to avoid use of e-cigarettes until more data is available (13). The largest case series was recently published from Wisconsin and Illinois (14). In this cohort, the majority of patients presented with respiratory, gastrointestinal, and constitutional symptoms. Chest imaging in all cases showed bilateral lung infiltrates. These characteristics are similar to the case reports in this series. The identification of lipid-laden macrophages that stain with oil red O in three BAL (bronchoalveolar) specimens from Utah has been suggested as a potential diagnostic tool (15).

Our case series highlights a clinical and radiographic presentation similar to the previously reported cases of vaping associated lung illness (VALI). Additionally, by expanding the spectrum of pathological findings that may be encountered in biopsy specimens of vaping-associated lung disease, we provide information which may aid in future identification of the underlying pathologic process resulting in lung injury. In our cases, the predominant histologic findings were organizing pneumonia (case 1) and AFOP (cases 3 and 4). It is possible that the biopsy results reflect acute hypersensitivity pneumonitis; however, the histologic features in such cases have not been well studied. Acute bronchiolitis has been described in acute hypersensitivity pneumonitis, which was absent in all our cases (16,17). Case 1 showed focal collections of foamy macrophages as described above, but they were not felt to be extensive enough for a diagnosis of exogenous lipoid pneumonia, as was the reported primary pattern of injury in the recent outbreak in North Carolina (18). Aside from lipoid pneumonia, other reported manifestations of lung injury include organizing pneumonia, bronchiolitis, acute eosinophilic pneumonia, suspected acute hypersensitivity pneumonia, diffuse alveolar damage, respiratory bronchiolitis interstitial lung disease, and pneumonia with pleural effusion (19). The consistency in the pathologic finding of organizing pneumonia with varying degrees of airspace fibrin across our case series is intriguing, and clinicians and pathologists need to be aware that it is one of the possible manifestations of vaping-related lung injury. All four patients were treated with intravenous antibiotics and high dose corticosteroids. It remains unclear whether both of these treatments are necessary.

Further research is needed in identifying the exact agent at fault as well as the underlying disease process in VALI.

Conflicts of Interest: All authors have completed the ICMJE uniform disclosure form (available at http://dx.doi.org/10.21037/ccts.2019.12.12). The authors have no conflicts of interest to declare.

Ethical Statement: The authors are accountable for all aspects of the work in ensuring that questions related to the accuracy or integrity of any part of the work are appropriately investigated and resolved. Written consent was obtained from patients for publication of this manuscript and any accompanying images.