Surgical treatment of locally advanced and centrally located non-small cell lung cancer (NSCLC) is based on the principle of parenchyma preservation, if technically feasible. In this context, the use of lung resections with bronchoplastic techniques plays an important role, in order to preserve lung function. The first documented bronchial sleeve resection was performed in 1947 by Thomas for a patient with pulmonary carcinoid located in the right mainstem bronchus (1). In 1952, Allison performed the first successful right upper lobe sleeve lobectomy for a patient with bronchogenic carcinoma (2). In 1950, Abbott reported four cases of right pneumonectomy with en bloc excision of the carina, lateral wall of the trachea and part of the left main bronchus (3). In 1959, Chamberlain and colleagues reported the first case of sleeve pneumonectomy (SP) (4). In 1982, Grillo published his experience on carinal resection in 36 patients and presented a comprehensive schema for carinal reconstruction (5). In 2002, Santambrogio and colleagues reported the world’s first full video-assisted thoracic surgery (VATS) sleeve lobectomy with bronchoplasty on a 15-year-old female with low-grade mucoepidermoid carcinoma of the left lower lobe bronchus (6). With the development of VATS technology and increased experience of surgeons using minimally invasive approach, the number of cases of sleeve lobectomy performed by VATS has increased. Surgeons have been skeptical to adopt and develop this technique because of oncological concerns and highly surgical skills required. After two decades of development since Santambrogio’s first reported case, VATS sleeve lobectomy has become a routine operation in high-experience centers, even performed by uniportal VATS (7). Some extended procedures, such as thoracoscopic double sleeve lobectomy (8,9) and carinal resections have been reported (10). The aim of this review article is to describe actual features of VATS sleeve procedures.

Sleeve lobectomy for lung cancer was initially proposed as an alternative to pneumonectomy for patients with poor cardiopulmonary reserve. Although this indication is still solid, sleeve resections should also be considered in any situation that is anatomically favorable for the treatment of centrally located tumors. In experienced centers, indications to sleeve VATS procedures do not differ from open procedures (11-14).

The main malignant indication requiring sleeve resection is NSCLC (squamous cell carcinoma and adenocarcinomas). Other common causes are carcinoids, hamartomas and adenoid cystic carcinomas or mucoepidermoid tumors. Any lobe can be a potential site for sleeve resection but the most common is the right upper lobe, also because of the relative length of the bronchus intermedius and the favorable arterial anatomy (15-17).

Despite sleeve lobectomy being the proposed procedure, operative findings may sometimes dictate the necessity of pneumonectomy; therefore, every patient must be evaluated for the most extended procedure. Preoperative evaluation provides careful clinical assessment, determination of the extension of lesion and resection, estimation of cardiopulmonary reserve and potential nodal involvement (Table 1). The assessment always includes computed tomographic (CT) scans in order to evaluate the infiltration of the bronchial structures. Bronchoscopy can confirm endobronchial involvement and allows to perform preoperative biopsies. Magnetic resonance imaging (MRI) and positron emission tomography (PET) scan contribute to estimate the extent of infiltration and the possibility of distant metastases, including the nodal status. If nodal involvement is suspected, an assessment with mediastinoscopy or EBUS is required. It is recommended to perform mediastinoscopy prior to sleeve resection under the same anesthesia to avoid fibrosis and fixation around the proximal main bronchi due to mediastinal procedure. This can also facilitate the subsequent dissection of the bronchi during sleeve resection. Perfusion scans may be required to assess the expected loss of pulmonary function after resection and it is mandatory in the event of pneumonectomy. In any case it can be difficult to establish preoperatively an indication for sleeve reconstruction, so the last evaluation will be necessarily surgical: in this scenario, we stress that the patient must be evaluated also for pneumonectomy (12,18-22). 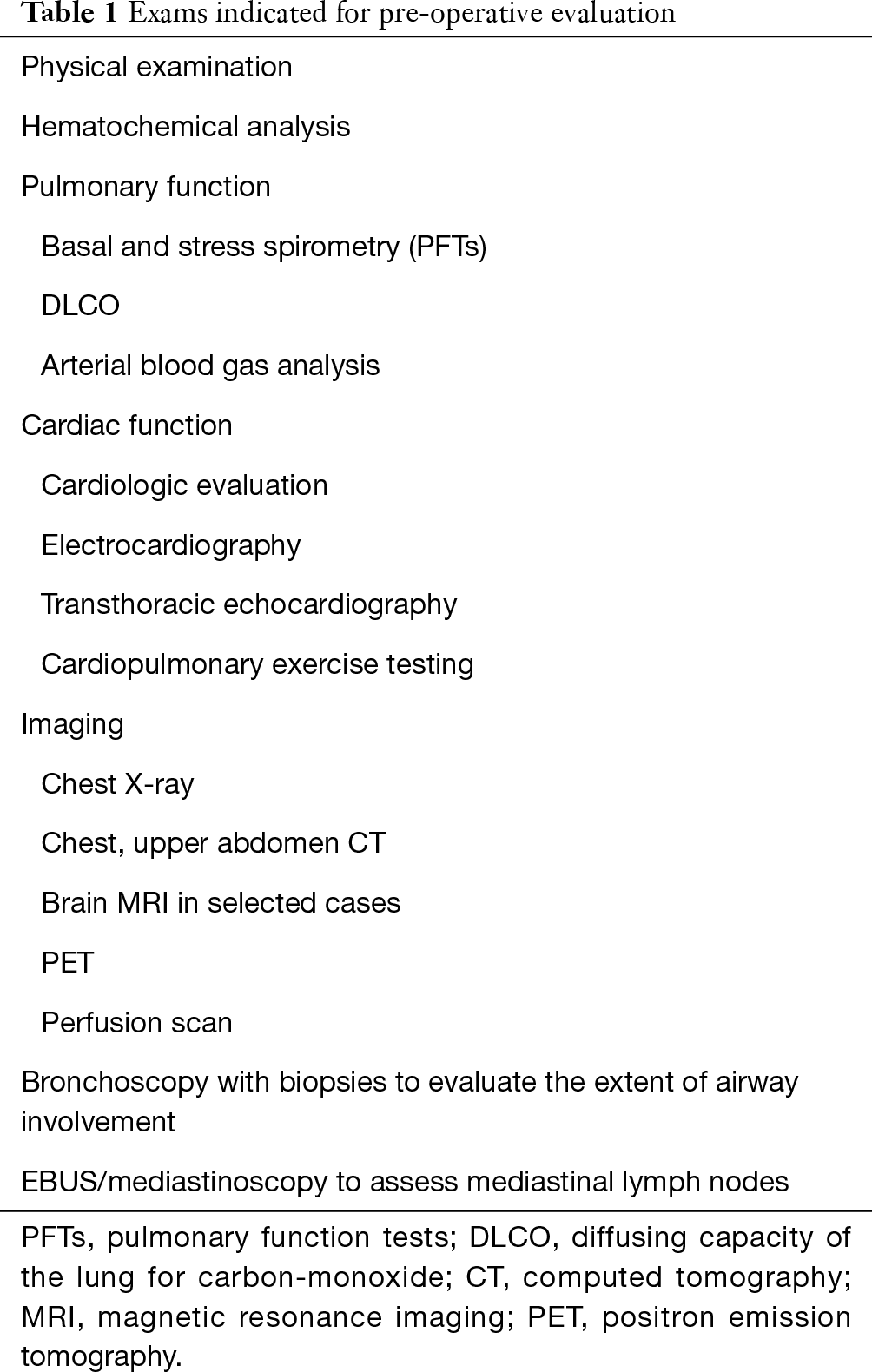 Patients with advanced lung disease or depressed cardiopulmonary reserve are poor candidates for sleeve lobectomy. Namely, contraindications include unresectable or metastatic disease. Also, the invasion of the phrenic nerve, the vagus nerve and the diaphragm is considered a contraindication to sleeve lobectomy, while the invasion of the main pulmonary artery is a relative contraindication. The procedure should not be performed in patient with inadequate pulmonary reserve or impaired cardiac function (23). In the first published articles, neoadjuvant therapy (>45 Gy) or steroid use were considered relative contraindications because of the risk of fibrosis or anastomotic dehiscence, but many authors demonstrated similar mortality and incidence of airway complications between treated and non-treated patients (24,25). N2 nodal disease is not an absolute contraindication, but it significantly impairs long-term outcomes due to local (40%) and distant (21%) recurrences (26,27). The situation for N1 disease remains controversial. Some authors demonstrated a significant difference in survival between N1 and N2 diseases but not between N0 and N1 (17,28,29).

Dealing with VATS sleeve lobectomy, we must comply with oncological, general and basic principles of bronchial reconstruction. It is mandatory to ensure free of disease resection margins and an adequate vascularization of a tension-free anastomosis. The procedure is conducted in general anesthesia with a double lumen tube, even though non intubated sleeve resections have been reported (30). The procedure can be performed by multiportal or uniportal technique, depending on surgeon’s attitude (7,31). The site of incision can be the fifth or fourth intercostal space; in our opinion, the fourth intercostal space is the best choice, particularly for upper lobectomies, because it guarantees a closer access to the bronchial anastomosis. The first step of the operation is the release of the inferior pulmonary ligament and the division of the mediastinal pleura around the hilum. The mediastinal lymph-node dissection is conducted before the bronchotomy, in order to further release the tension. Some Authors suggest a hilar release by cutting the pericardium around the inferior pulmonary vein in cases of high-tension anastomosis; we believe that this is not mandatory in case of “standard” sleeve resections, but it can be useful when performing “extended” sleeve lobectomies (32). In all types of sleeve lobectomies, pulmonary arteries and veins are transected prior to bronchotomy; also, the fissure is usually divided before bluntly dissecting the peribronchial tissue. The cutting section of the bronchus is guided by endoscopic evaluation; in case of disease located at the origin of the main bronchus, it is advisable to lift the trachea with a stitch, in order to avoid retraction into the mediastinum after bronchotomy. Frozen sections analysis on both proximal and distal margins are mandatory, to ensure that both are free from disease. In case of discrepancy between proximal and distal bronchial stump, it is important to adjust the calibre before starting the suture. Reconstruction is the key point in this kind of procedures: it can be technically demanding because of the limited working space. The choice of the type of suture material depends on surgeon’s preference: most Authors believe that a monofilament is recommended, while there is no unanimity on the use of a readsorbable or non-readsorbable suture. A silk suture is contraindicated because of the risk of granulation that can lead to a bronchial stenosis (33). In our experience, a 4/0 readsorbable monofilament is the preferred material. The way of VATS suturing is different, compared to open sleeve lobectomy: it is better to avoid interrupted suture of the cartilaginous pars, and to choose a technique with one single running suture for the whole end-to-end anastomosis or two separate threads, especially for left sided upper lobe sleeves (34,35). Usually, after confirming the absence of an air leak from the anastomosis by inflating the lungs in presence of saline solution, an intraoperative bronchoscopy is performed. An anastomosis coverage can be indicated, particularly after chemoradiation or in case of extended sleeve lobectomies. Different tissues can be utilized: the azygos pedicled flap in the right side, a pedicled aortic adventitia flap (36), the pericardial fat tissue or the intercostal muscle flap, which is easy to perform, even in VATS procedures (37). Berthet et al. reported a routine use of the intercostal muscle flap, Toyooka et al. usually used pericardial fat tissue or greater omentum for anastomosis covering (38,39). Other authors did not perform anastomosis coverage routinely, while Okada, Yamamoto, and Chida created coverage with fat tissue or muscle only in cases with combined angioplasty to separate the two anastomotic sites, thus preventing bronchovascular fistulae (32,40,41).

Sleeve lobectomies were first introduced as an alternative to pneumonectomy in patients with centrally located disease, when pulmonary reserve was thought to be inadequate to tolerate pneumonectomy. Over the subsequent years, different studies showed comparable oncological outcomes to pneumonectomy with lower postoperative mortality and morbidity (17), and it became the procedure of choice for anatomically suitable lesions, regardless of pulmonary function. The advent of VATS approach was in 1992 (50), and in the following years this technique has spread worldwide. Despite the advantages associated with minimally invasive surgery, sleeve lobectomy and bronchoplastic procedures had been viewed for many years as an absolute contraindication to VATS approach, as it is a challenging and technically demanding procedure (51,52). Hansen in 2011 in his relevant paper that standardized the VATS Copenhagen approach, claimed that the minimally invasive procedure was contraindicated in case of disease visible at bronchoscopy (53), as it was considered unsafe; moreover, the surgical community had many doubts about the oncological radicality. The first VATS sleeve procedure was conducted in 2002 for a low-grade mucoepidermoid carcinoma by Santambrogio (6). During the following years, more and more case series were published, demonstrating the feasibility of this approach (31,54). In the last 10 years, the number of reported VATS sleeve resections has exponentially increased, particularly in Asian countries. In 2019, Gao published a retrospective study comparing VATS and thoracotomy sleeve lobectomy using propensity score matching. The number of harvested lymph nodes, as the recurrence rate, both local and distal, was similar between the two groups, while patients in the VATS group showed less blood loss and a shorter hospital length of stay. Moreover, recurrence-free survival and overall survival were better in patients who underwent VATS resection, even though the difference did not reach statistical significance. Gao therefore claimed that VATS sleeve lobectomy was a safe procedure, with oncological outcomes comparable to those after thoracotomy sleeve lobectomy and a faster post-operative recovery (55). It should also be considered that the more rapid healing after VATS surgery could lead to an earlier start of adjuvant chemotherapy, which in these cases is often indicated (56). Currently, the reported average operating time of a VATS procedure is significantly longer, compared with patients who undergo sleeve lobectomy by thoracotomy approach (57), but with increasing experience in VATS procedures this difference will progressively decrease. In expert hands, the centrality of a tumor, invading hilar structures, is not considered an absolute contraindication to a minimally invasive approach by most surgeons, even by uniportal technique (58). Moreover, the advancement of dedicated technology development, such as 3D cameras, is considered very promising in this field, because a better visualization will allow a straightforward bronchial suture. In conclusion, if oncological criteria are observed, patients with centrally located disease can benefit from the mini-invasive VATS approach, in high-experienced centers.

Conflicts of Interest: All authors have completed the ICMJE uniform disclosure form (available at http://dx.doi.org/10.21037/ccts.2019.12.10). The Focused Issue “Thoracic Surgery Without Borders” was commissioned by the editorial office without any funding or sponsorship. Dr. Davide Tosi serves as an unpaid editorial board member of Current Challenges in Thoracic Surgery from Nov 2019 to Oct 2021. The authors have no other conflicts of interest to declare.