Chest wall involvement in bronchogenic carcinomas is observed by approximately 5% to 8% of resectable lung cancer (1). In these cases, patients may present a heterogeneous extent of invasion, ranging from parietal pleura infiltration to full-thickness invasion of the chest wall, with or without the involvement of neighboring anatomic structures such as intercostal space including neurovascular bundle, vertebrae, mediastinal vascular structure, as well as extra-thoracic soft tissues. As a whole, these bronchogenic carcinomas are classified as T3 or T4, depending on the involved structures (2). In such cases, extended resection is needed to maximize the chances of durable disease control (3). Demolition and reconstructive surgery stand as a mainstay in the treatment of non-small cell lung cancer (NSCLC) (Figure 1). Moreover, increasing the use of multimodal integrated treatment, including chemo- and radiotherapy regimen, as well as induction immunotherapy, is expected to increase the number of currently disqualified patients at presentation who can be considered eligible for curative-intent surgery after preoperative treatments.

The prognosis of patients with tumors invading the chest wall and mediastinal lymph node metastasis is poor. The five-year survival rate of T3N0 ranges from 40% to 50% in the different series, but these figures are halved in N1 patients, decreasing to one fifth in N2 patients (4,5).

Different prognostic factors have been consistently reported in the literature for those patients; incomplete resection of the tumor, presence of nodal involvement (especially in the N2 stations), depth of chest wall invasion, among others. Nevertheless, the role of other factors influencing survival is still unclear, and many questions remain partially unanswered, including the effective role of multimodality regimens or the impact of adjuvant chemotherapy or radiotherapy in completely resected chest wall invading NSCLC without nodal involvement (6-9).

A review of the literature was performed to identify prognostic factors related to long-term-survival in NSCLC, invading the chest wall.

The most essential and representative prognostic factors in literature are:

Different literature reports agree that lymph-node involvement and pathologic nodal status is the most important prognostic factors (1,5-8,10-22). Five-years survival is impacted, in the examined literature, by the presence of ipsilateral hilar (N1) or mediastinal (N2) lymph-node metastasis, as shown in Table 1. 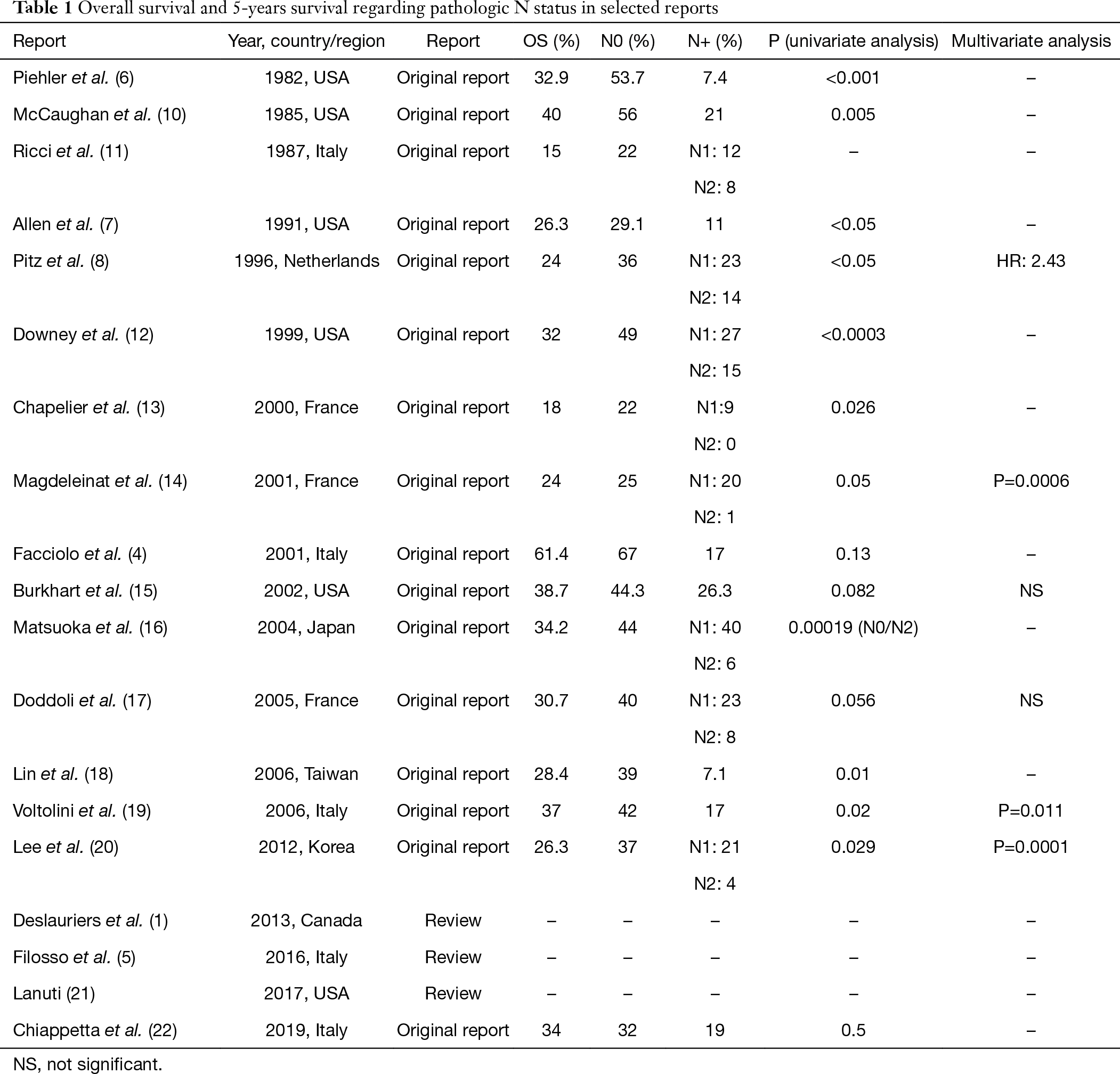 Persistence of tumor tissue after resection and the presence of incompletely resected margins of the specimen represent another significant prognostic factor (8,14,16,19,20). The cornerstone of the surgical treatment is the complete resection (R0) without microscopic (R1) or macroscopic (R2) positive margins. R1/R2 resection is a negative impact factor on the survival of these patients, as shown in Table 2. 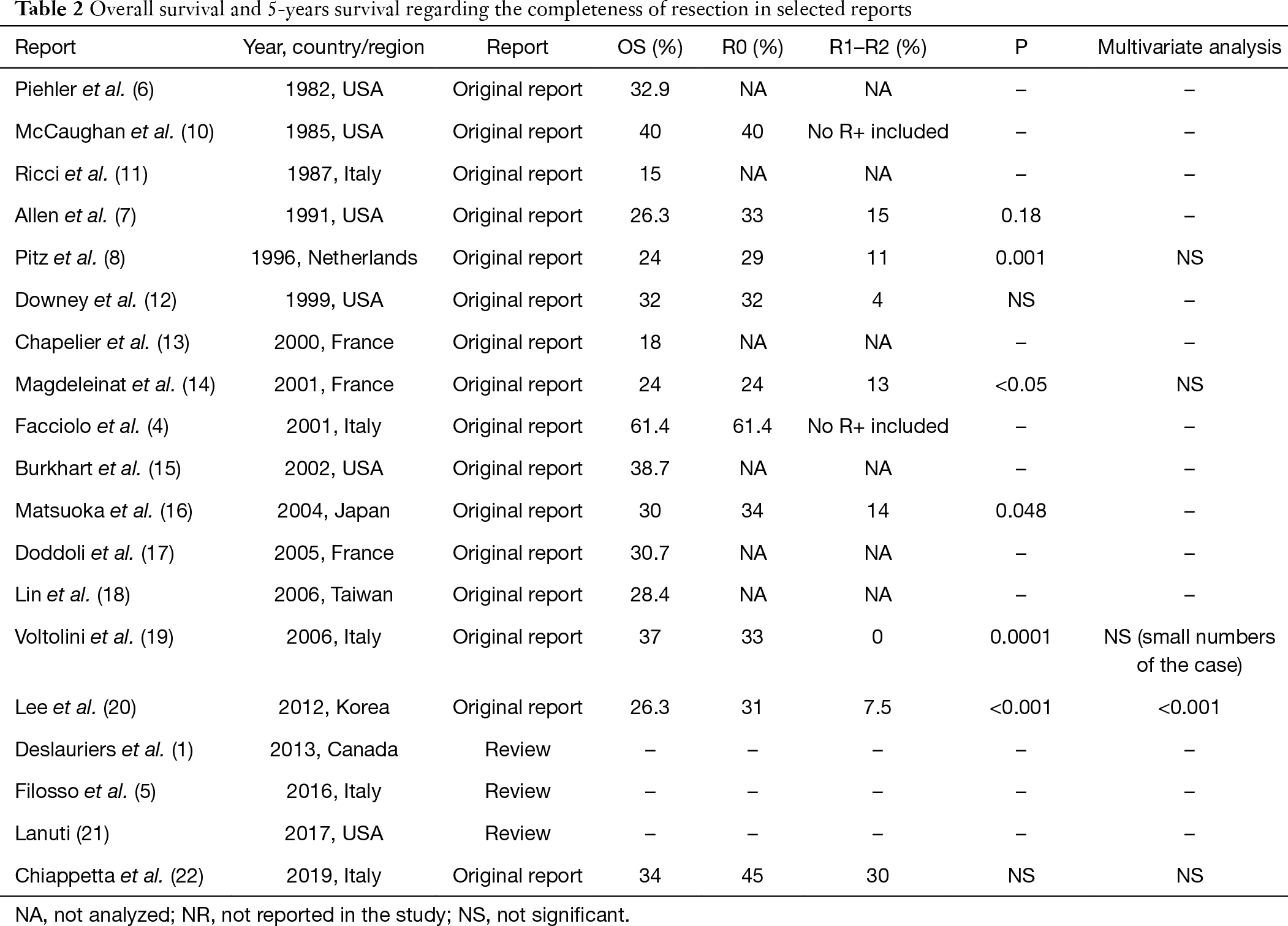 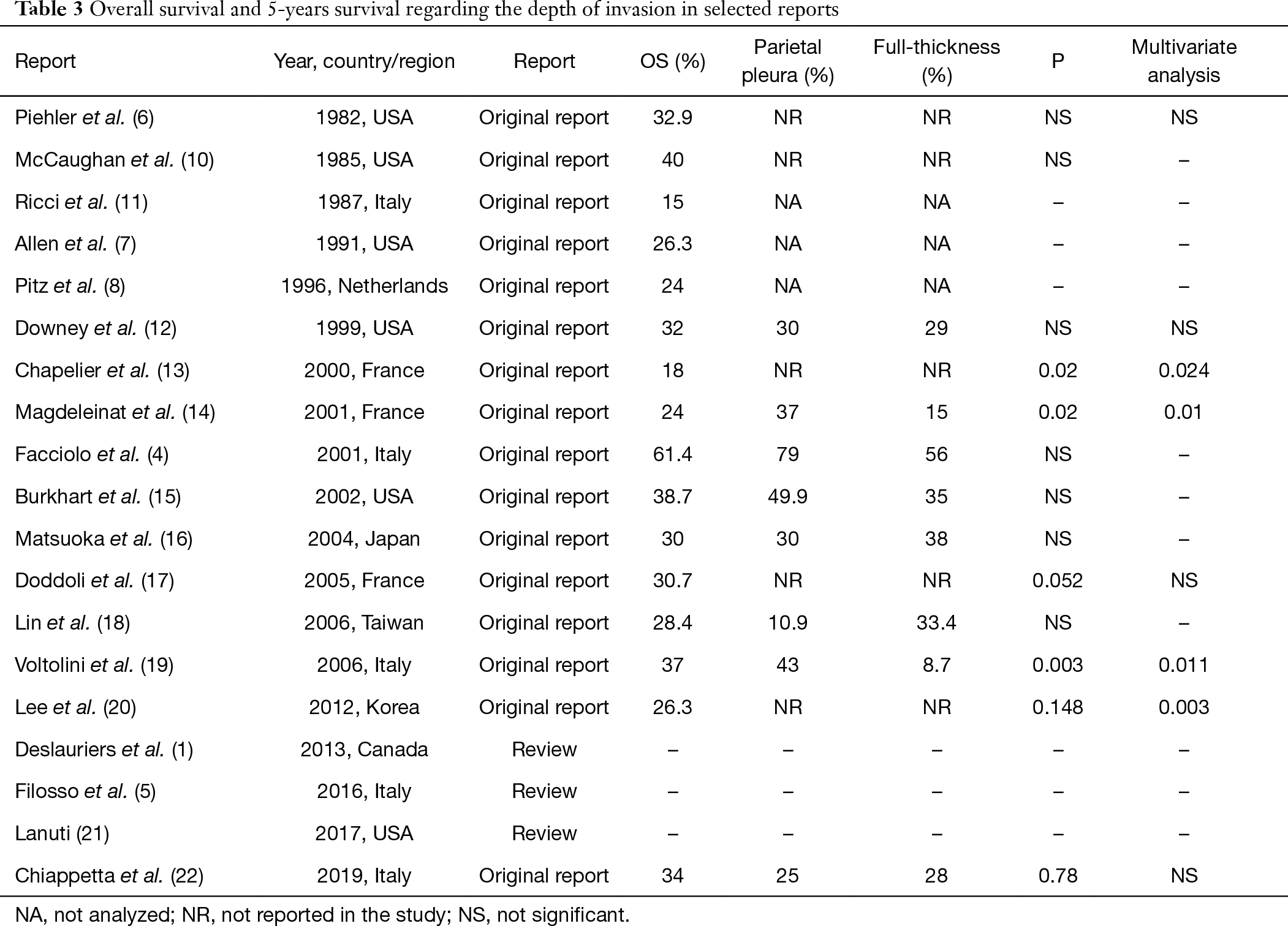 Other authors found that the number of resected ribs is a prognostic factor (1,13,17,21), though it could be considered as an indirect parameter correlated to tumor size: indeed, a diameter > 5cm was associated to the extension of resection, as reported by Lee et al. (20).

The real cut-off of resected ribs is a matter of debate: according to Chapelier et al. (13) and Doddoli et al. (17), it corresponds to 2 resected ribs.

In 5–10% of the cases, bronchogenic carcinoma is accompanied by chest wall involvement. Surgical resection, whose technical feasibility was firstly described in 1947 by Coleman (23), is the critical element in the management of most patients with chest wall invading NSCLC. Regardless of pT or pN, overall 5-years survival for these patients ranges from 10% (5,11) to 61.4% (4) in the different series. Several authors tried to identify the various factors influencing survival.

The most important prognostic factor revealed in almost all analyzed works is the pathological nodal status (1,4,5-8,10-21). The presence of lymph nodal involvement strongly impacts the survival rate. In the different analyzed series, in T3 patients, N2 is a significant negative prognostic factor reducing survival (12,13) as compared to N0 (3-5). The most remarkable difference in 5-year survival between T3N0 and T3N2 (67.3% vs. 17.9%, P=0.007) is found in the report by Facciolo et al. (4). In general, the median 5-year survival rate for pT3 N0 patients is estimated at 50%; the presence of lymph nodal metastases worsens this rate up to 20–25% in N1 and below 10% in N2 patients (3,5). These results are even more surprising if we consider that the life expectancy of selected state IV patients with oligometastatic disease (brain or adrenal gland) may be superior as compared to T3N2 patients (24,25). Lymph nodal involvement is not always related to the tumor size and the depth of the CW invasion (3,24,25). A cytologic or histologic N2 confirmation finding (EBUS, mediastinoscopy) represents, for some authors, a strong contraindication to surgery (3). According to current clinical practice, in the presence of N2 involvement in a potentially resectable T3 lung cancer, the use of neoadjuvant chemotherapy followed by surgical re-evaluation is a valuable option (4). However, the benefit of multimodality management encompassing chemotherapy and radiotherapy in lung cancer invading the chest wall is debated. Except for superior sulcus tumors, for whom neoadjuvant chemoradiotherapy is a standard of care (26,27), current guidelines validate surgery as the primary treatment modality in T3–4 N0–1 NSCLC patients and limit the use of radiotherapy to the case of incomplete resection. Most interestingly, indirect evidence suggests a possible increased benefit in survival for preoperative radiotherapy in patients with T3N2 NSCLC (28). This is an important issue: since nodal staging is the primary determinant of prognosis (1,4,5-8,10-21), some authors discourage surgical resection if N2 disease is recognized (7,29), while others experience (11,12,14,30) consider that mediastinal nodal involvement should not be considered a contraindication to surgery on the basis of encouraging 15–21% survival at five years in operated patients. While a recent meta-analysis found no benefit of chemoradiation compared to induction chemotherapy in operable stage IIIA patients (31), it could be speculated that use of chemoradiation, combined with extended resection, may be of interest in the subset of patients with T3–4 N2 disease to increase the rate of complete resections.

Incompleteness of resection represents another prognostic factor (8,10,12,16,19,20). It is well known that a main goal of the surgical treatment is represented by clear surgical margins, since pathologic microscopic (R1) or macroscopic (R2) margins of the specimen represents may impair the survival of these patients. Thus, 5-year survival rates for R0 and R1/R2 resection in these patients range between 40.4–58.3% and 10.9–15.9%, respectively (8,32,33). According to Downey et al. (12), an incomplete resection, even if R1, doesn’t ensure a real curative benefit. The 3-years survival (4%) of incompletely resected patients did not significantly differ from 3-years survival of the patients undergoing no resection at all (0%). Hence, quality of the resection is capital in achieving long-term survival: Matsuoka et al. (16) stress the paramount importance of complete resection, because of a statistically significant difference in survival rate between patients receiving complete (5-years survival 34.2) or incomplete resection (14.3%).

Two other major prognostic factors are the extension of resection (number of resected ribs) (1,13,17,21) and the depth of infiltration (1,8,10,13,14,20,21). They may influence the choice of surgical technique (6-8,10-12), in particular, if tumor invasion does not extend beyond parietal pleura (14). Preoperative workup is crucial in determining the surgical technique. At present, computed tomography is frequently used to assess chest wall invasion (34); alternative imaging modalities include surgeon performed ultrasound (34) or magnetic resonance imaging (35), in particular, weighted sequences (disruption of the extrapleural fat tissue) or cine MR techniques (fixation of the tumor during respiratory motion) (35). Nevertheless, chest invasion evaluation relies mainly on intra-operative assessment of tumor adhesion to parietal pleura. Some authors conclude that patients with tumor invasion limited to parietal pleura experience improved survival—advocating for exclusive pleurectomy—if extra-pleural dissection can be obtained (10,12,20), considering the absence of significant difference in the 5-year survival between the patients with only pleural invasion, receiving extra-pleural resection and chest wall resection (20). The presence of the parietal pleura may act as a barrier to tumor infiltration; thus, the use of extra-pleural dissection can limit the extent of the resection without jeopardizing the oncological safety of the procedure (36). However, the depth of tumor infiltration and the presence of a cleavage plane with the chest wall are frequently judged on an operator-dependent basis, and intraoperative pathologic assessment is rarely contributing: hence, extra-pleural dissection might result in a potentially higher number of incomplete resections (12). Extra-pleural dissection can be safely performed in selected patients with invasion limited to parietal pleura if satisfactory dissection of pleura from the underlying osteomuscular plane can be achieved. In case of proven extension beyond parietal pleura, en bloc pulmonary and chest wall resection is required.

Finally, age >60 years (6,14) and male sex (15) have also been reported among prognostic factors; however, the confounding effect of other variables due to the small population in these studies cannot be excluded.

In conclusion, lung cancer invading chest wall remains a challenge for medical and surgical teams; the principal prognostic factors impacting on survival are lymph-node status, depth of disease infiltration and extension of the resection and the completeness of resection. Even if multimodality management encompassing chemotherapy and radiotherapy strategies in lung cancer invading chest wall is debated, a multidisciplinary approach, integrating surgery, neoadjuvant and adjuvant radio, and chemotherapy is the key to offer patients the best available solutions in the optimal timing.

Conflicts of Interest: All authors have completed the ICMJE uniform disclosure form (available at http://dx.doi.org/10.21037/ccts.2019.12.01). The Focused Issue “Surgical Management of Chest Wall Tumors” was commissioned by the editorial office without any funding or sponsorship. The authors have no other conflicts of interest to declare.