Flap reconstruction of the chest wall after oncologic resection

Thickness of chest wall defects can be classified as full or partial. Partial-thickness defects include defects of the soft tissue and skeletal bone. In the case of oncological resection, one-stage surgery is recommended. In this procedure, resection and reconstruction are conducted in the same operation. In this article, we focus on soft tissue reconstruction of the chest wall after oncological resection.

The goals of chest wall reconstruction

Coverage with well-vascularized soft tissue is essential not only for achieving the goals of reconstruction (1,7,12), but also for providing an acceptable cosmetic result (2). However, there is still controversy regarding what the size and location of the defect of the chest wall cage should be to necessitate chest wall stabilization (7).

Extensive chest wall resection and reconstruction are surgically challenging, but also potentially critical for the survival of the patient. For this reason, careful patient selection is important. A multidisciplinary approach in patient selection, in addition to careful perioperative and post-operative therapy, is essential to achieve the best and earliest possible recovery. The timing and treatment should be individually determined. Surgical operation should be carefully planned in order to achieve a fast and safe operation.

Whether chest wall cage restoration is mandatory for stabilization remains contentious, and largely depends on the size and location of the defect of the chest wall. It has been shown that in larger chest wall defects, reconstruction with mesh has reduced ventilator dependence and hospital stay compared to defects reconstructed without mesh (13).

In small, full-thickness defects (one or two ribs), some surgeons use synthetic mesh to prevent bulging or herniation of the lung (3,4). It is widely thought that defects over four ribs or larger than 5 cm need stabilization (10,11). Stabilization of the chest wall and soft tissue reconstruction are also needed mainly in larger, full-thickness defects. For larger anterior or anterior-lateral defects, several surgeons have recommended additional stabilization with more rigid techniques such as the sandwich technique (methyl-methacrylate between two meshes) (15), rib graft with mesh, and titanium plates (16). For exclusively skeletal bone defects after chest wall stabilization, soft tissue reconstruction is not mandatory if the primary closure is completed with well-vascularized, healthy soft tissue. If the soft tissue is compromised from previous radiation therapy, the flap reconstruction may endure wound healing. In some select cases, a skin graft is possible, but usually it is suboptimal for the reconstruction of the chest wall defect.

The choice of reconstruction method is based on the location and size of the defect, availability of the local and pedicled options, patient history of previous operations or radiotherapy, and the general condition and prog¬nosis of the patient. Location of the defect is especially relevant not only when assessing the need of chest wall stabilization, but also for soft tissue reconstruction.

During flap selection, it should be verified that harvesting the area of the flap will not affect breathing (18), and that closing the flap harvesting area will not increase the defect size in the reconstruction area.

The latissimus dorsi muscle or latissimus dorsi musculocutaneous flap (Figure 1A,B,C,D) has been used as a workhorse for chest wall reconstruction in several surgical series (1,3,4,14,19). This flap is also commonly used to obliterate dead space in intrathoracic defects (20,21), as muscle should not be cut in routine thoracotomy. The latissimus dorsi flap has many advantages, including its large size, its ability to be tailored to the defect, a relatively long pedicle that allows a wide arc of rotation, and its ability to be easily harvested. The skin island of the cutaneous flap can only be harvested to a width of 7–10 cm if the aim is to close the donor site directly. If a large skin island is needed, a donor area has to be skin grafted. The flap can cover most anterior, anterior-lateral, and posterior-lateral defects. 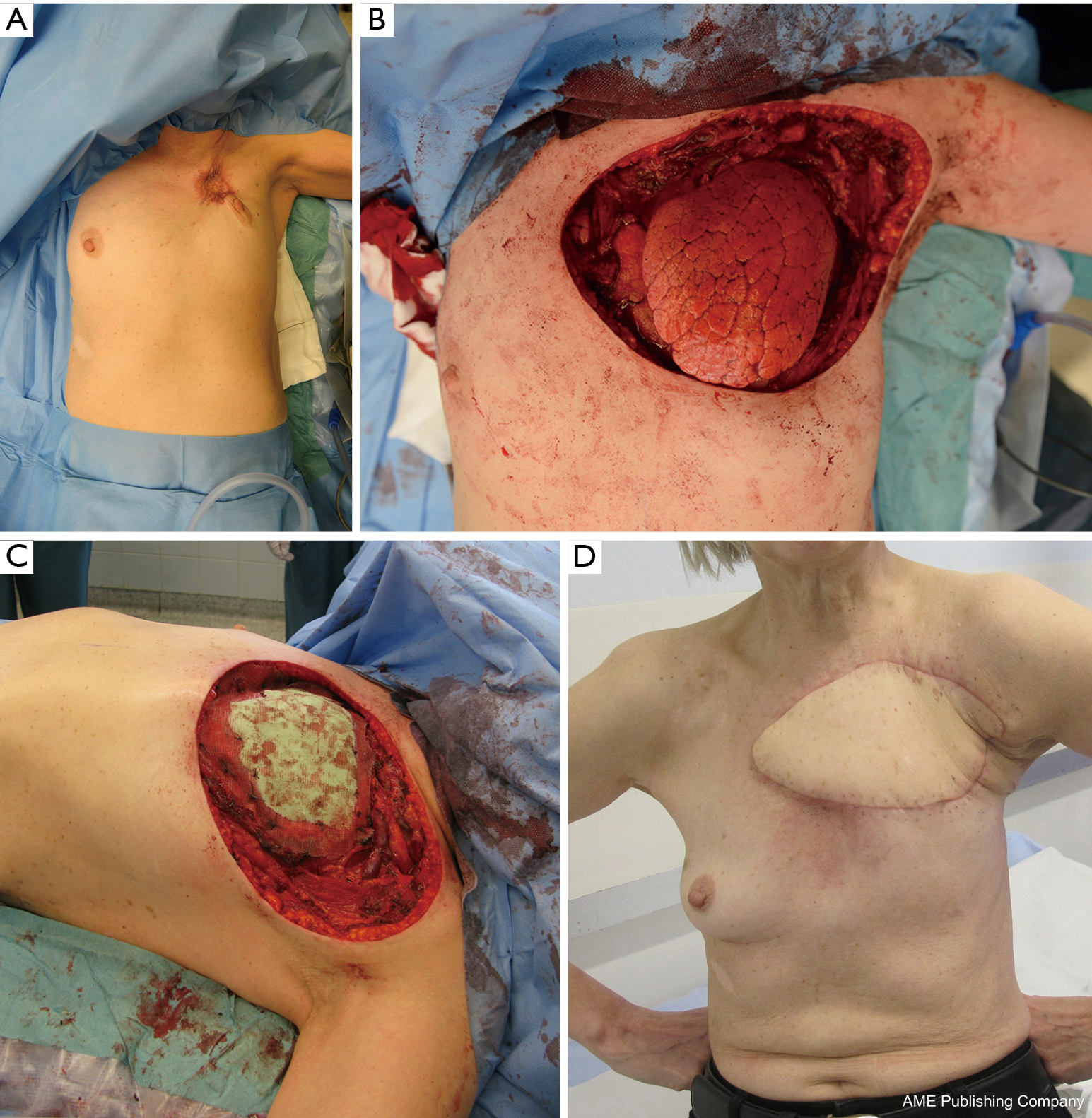 The pectoralis major muscle flap is another popular choice in chest wall reconstruction (1,14,22). Vascularity of the flap is supplied by a dominant thoracoacromial pedicle and secondary intramammary pedicles. The flap can be used as a pedicle flap based on the thoracoacromial pedicle, or split turnover flap based on secondary pedicles. The flap can be harvested with or without a skin paddle, and can reach to the anterior chest wall. In wider defects, bilateral flaps can be used.

The external oblique muscle flap has also been used in chest wall reconstruction, although the use has not been generalized as in the case of the pectoralis major, rectus abdominis, or latissimus dorsi muscle flaps. Several surgeons (1,26) used this flap in their reconstructions in the nineteenth century, and more recently, Chang et al. (19) have continued to use it. Lee et al. (27) recently reported the results from 75 reconstructions following advanced or recurrent breast cancer. According to their report, complication rates were low, and operation times were under two hours. The flap can be used in anterior-lateral and thoraco-abdominal reconstruction.

The SEAP flap has been used in reconstruction of sternal wound infection after median sternotomy (33,34). The advantages of the SEAP flap include the relatively short operation time (33) and sparing of muscle tissue (34).

The omentum flap is an alternative option for anterior and anterio-lateral chest wall defect reconstruction (35). The flap can be harvested from traditional open laparotomy (36) or laparoscopy (37). The omentum flap is supplied from unilateral or bilateral gastroepiploic vessels. This flap offers several advantages, including a large surface area, pliability, and a long pedicle. However, the flap has to be covered with a skin graft or another flap, and carries the risk of subsequent hernia.

In special circumstances, a midline chest wall defect can be covered with a breast flap. The major advantage of this flap is fast operation time, particularly in the highly morbid elderly patient cohort (2).

The indications for microvascular free flaps are the following:

In general, the ideal microsurgery flap has a constant anatomy a reliable and sufficiently large pedicle, and the ability to be rapidly harvested. The same principles are important in choosing a microvascular flap for chest wall reconstruction (17).

Microvascular free-flap reconstruction should be carefully planned to achieve a fast and safe operation (2). When possible, a two-team approach is used, and the patient is kept in one position throughout the operation, to avoid a prolonged operation time (3,18). 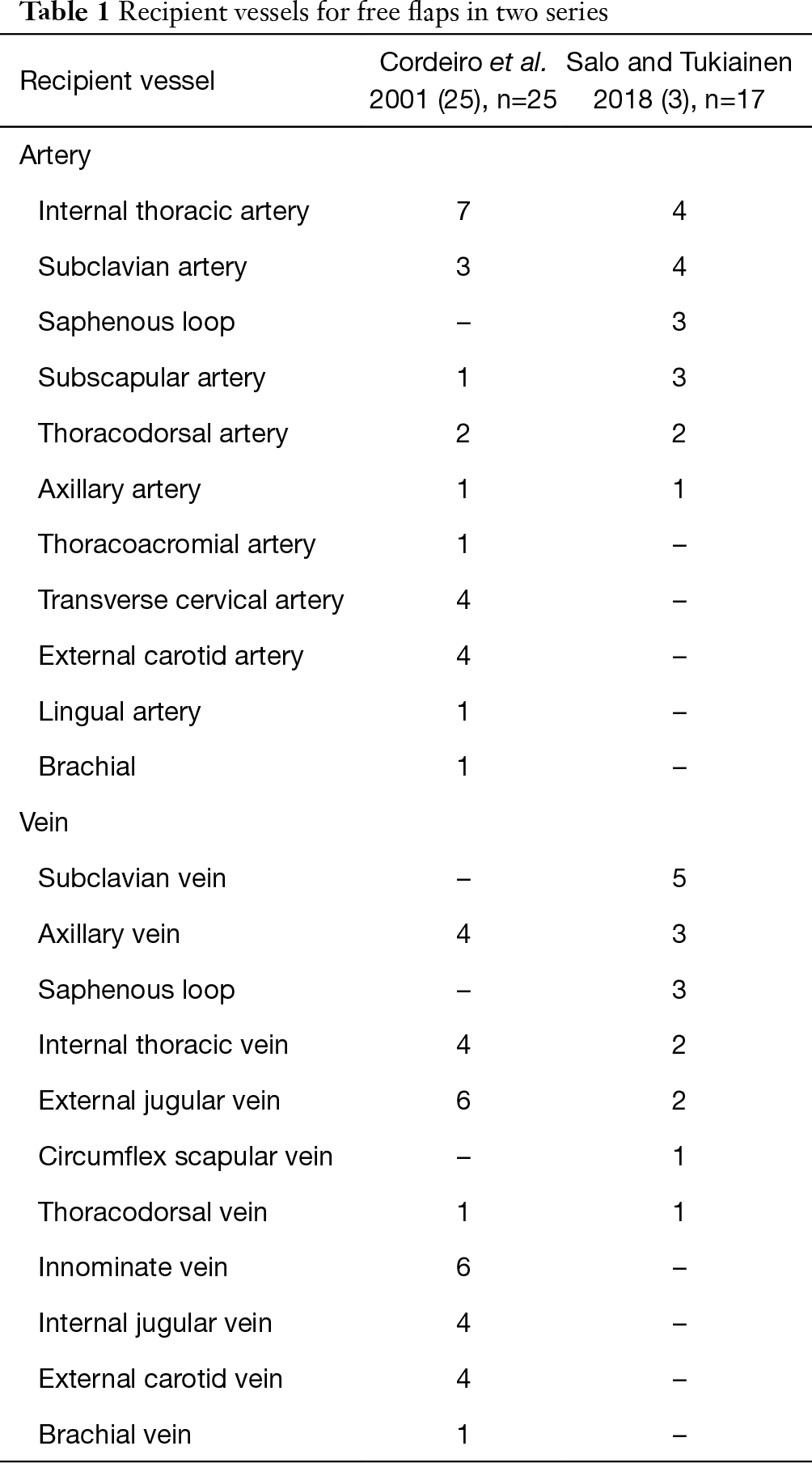 Free flaps from thigh areas are very useful and have no negative effect on breathing. These flaps allow flap harvesting and reconstruction in the same position. TFL flap (Figure 2A,B,C,D) is a strong option, as it provides constant anatomy, large flap (up to 20×35 cm), and large vessels to permit safe anastomosis. Usually, the donor side of the TFL flap has to be skin-grafted, and leaves few aesthetic donor deformities. 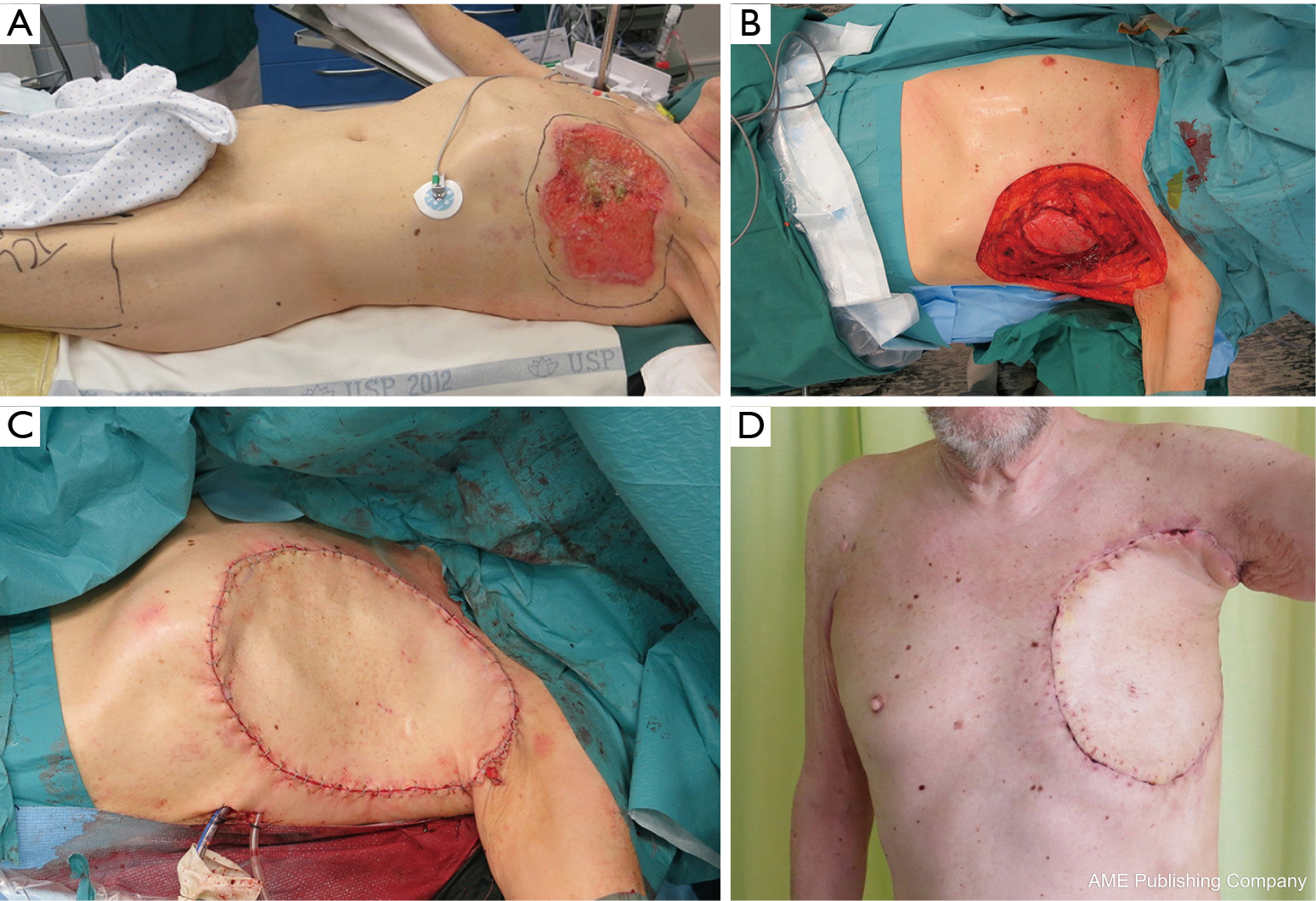 When a particularly large TFL flap is needed (>25×35 cm), including muscle (rectus femoris or vastus lateralis) with the flap gives more perforator vessels to the distal and medial part of the large flap (2,3).

The ALT became a popular free soft tissue reconstruction method in the twentieth century (41). The usage of this flap in chest wall reconstruction has increased (18,42,43). A skin paddle can be harvested 8×25 cm (44) with direct closure, and the flap has a long pedicle (42).

Repeated lateral thoracotomies can damage thoracodorsal vessels, rendering the ipsilateral latissimus dorsi muscle flap unusable. The contralateral latissimus dorsi muscle has been successfully used as a free flap (25); in this situation, the position of the patient may need to be changed during the operation. The flap is reliable because of the large diameter of supplying thoracodorsal vessels (2–4 mm). Moreover, donor site morbidity is minimal, and the flap has a large volume. In massive defects, other parascapular flaps can be used in addition to the latissimus dorsi flap.

The musculus rectus abdominis flap used to be popular in chest wall reconstruction as either a pedicled (45) or free flap (25), both of which have poor rates for donor site morbidity. After harvesting, there is a defect in the anterior rectus sheath. This can cause a hernia, even when synthetic mesh is used in the reconstruction of the abdominal wall (44).

Presently, musculocutaneous variants of rectus abdominis muscle flap including TRAM, muscle-sparing TRAM, and VRAM, are the microvascular flaps most commonly used in locally advanced breast cancer (43). The flap is reliable, large (2), easy, and can be harvested quickly.

Omentum flap as a free flap is mainly used as a salvage procedure (44).

Thirty-day mortality in chest wall reconstruction reports ranges from 0 to 7%, which is considered to be acceptable (3,4,11,12,14).

According to the reports on 5-year survival following oncologic chest wall resection and reconstruction, there is wide variation across the different types of cancer; breast cancer ranges from 9% to 69% (3,47-49), soft tissue sarcomas from 55% to 89% (50-53), chondrosarcomas and bone sarcomas from 64% to 92% (3,54,55), and advanced lung cancer from 21% to 61% (56,57). In general, the survival rates of the patients tend to reflect the varying biological behaviors of the different cancers.

Recently, health-related quality of life research (HRQOL) has been recognized as an important part of cancer research, and has become an essential end-point of therapy (59). A recent article was published that evaluated the long-term HRQOL in patients after chest wall reconstruction following oncological resection. According to this publication, the outcome was largely comparable to that of the age- and gender-standardized general population (60), although a slight limitation in breathing or subjective assessment of dyspnoea was noted (60,61).

Conflict of Interest: The authors have no conflicts of interest to declare.

Ethical Statement: The authors are accountable for all aspects of the work in ensuring that question related to the accuracy or integrity of any part of the work are appropriately investigated and resolved.