The term gossypiboma refers to a retained surgical sponge in a visceral cavity. The etymological origin derives from the latin word for cotton “Gossypium” and the Swahili word for hide-out “Boma” (1). Another common term is textiloma.

Retention of intrathoracic foreign bodies after former surgery are a rare entity and may cause a variety of mostly chronic nonspecific symptoms, if not discovered early postoperative.

These cases are often misdiagnosed with benign lesions in interventional and radiological work up. When diagnosed through re-operation, medicolegal implications for the primary surgeon are mostly implicated.

Leaving a surgical swab or instrument in the operative field is a never event and nowadays, WHO Surgical Safety Checklists and “team time-out” procedures in the operating theatres are trying to ensure patients´ safety from preventing these never events to happen.

Nevertheless, intrathoracic gossypiboma should be considered as differential diagnosis in patients with unclear and inexplicable clinical situations in the presence of lung masses and history of a thoracic surgery.

A 58-year-old male patient from Russia was admitted to our department for further evaluation suffering from an unclear necrotizing pneumonia of the right lower lobe, which was already treated unsuccessfully with antibiotics. The patient presented with productive cough, fever and haemoptysis. As differential diagnosis we considered tuberculosis, aspergilloma and lung cancer.

Fifteen years ago, the patient underwent a right-sided thoracotomy in Russia. Neither the patient nor his family were able to refer, why the surgery had been performed. The related medical documents were not available.

The CT-scan showed a cavernous lesion of 5 cm × 6.5 cm in the right lower lobe (Figure 1). A PET-CT scan was also conducted. It showed an abnormal FDG uptake in the lower lobe (SUVmax 8.1) and in the mediastinal lymph nodes (SUVmax 3.9) (Figure 2). 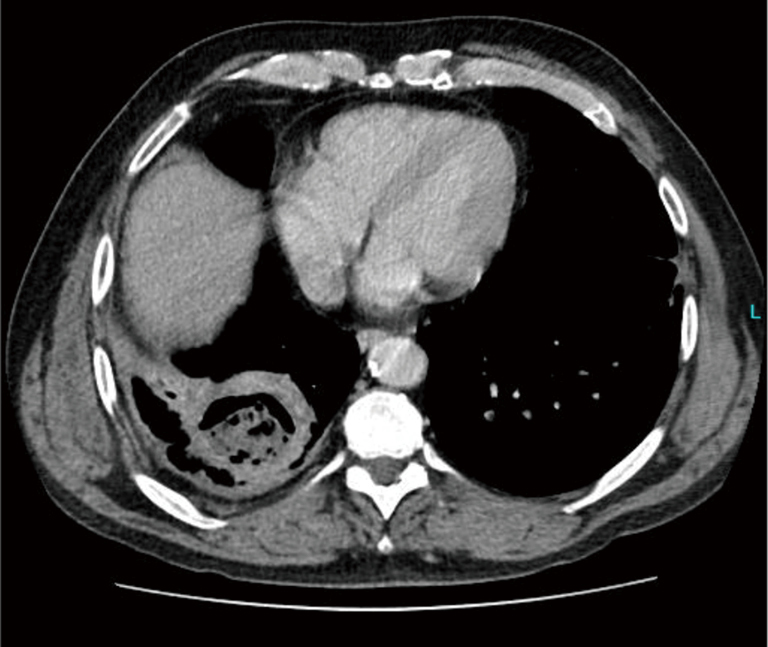 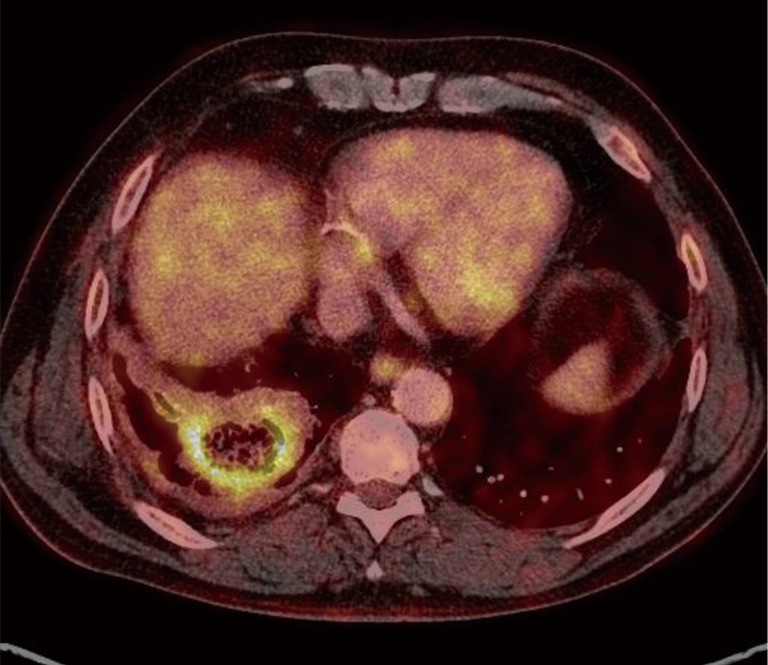 Figure 2 PET-CT image showing the FDG uptake of the mass.

The bronchoscopy revealed a collection of purulent foul-smelling mucus in the right lower lobe. T bronchoalveolar lavage revealed a neutrophlic alveolitis. Microbiologically open tuberculosis or aspergilloma could be ruled out. An EBUS-TBNA of the PET-positive hilar and mediastinal lymph nodes (stations 4, 7 10 right) did not reveal any signs of malignancy.

We discussed the radiologic and microbiologic findings in our multidisciplinary team meeting and consequently a right re-thoracotomy with a resection of the cavernous lesion to clarify its aetiology was planned.

After adequate preoperative preparation of the patient, a muscle sparring anterolateral re-thoracotomy was performed in the 5th intercostal space (one space below the former thoracotomy). Intraoperatively we found a severe fibrothorax. The lung was entirely adherent to the chest wall and the lower lobe was completely fused with the diaphragm. Hence an extensive pleurolysis with extrapleural preparation had to be performed. A second lower thoracotomy had to be carried out to release the lower lobe from the diaphragm. Due to the central location of the mass, it became clear that an anatomical resection of the lower lobe had to be performed after preparing the central structures.

Once that the lower lobe was anatomically resected, the tissue on the diaphragmatic side was incised to obtain microbiological samples of the lesion before sending the specimen to pathology. The incision showed a very thick fibrotic layer and underneath an old gauze swab, which was apparently forgotten during the former operation 15 years before (Figure 3). It still remains unclear, if the gauze was at that time stuffed into a resection site in the lung parenchyma or if the lung tissue had folded around it secondarily. 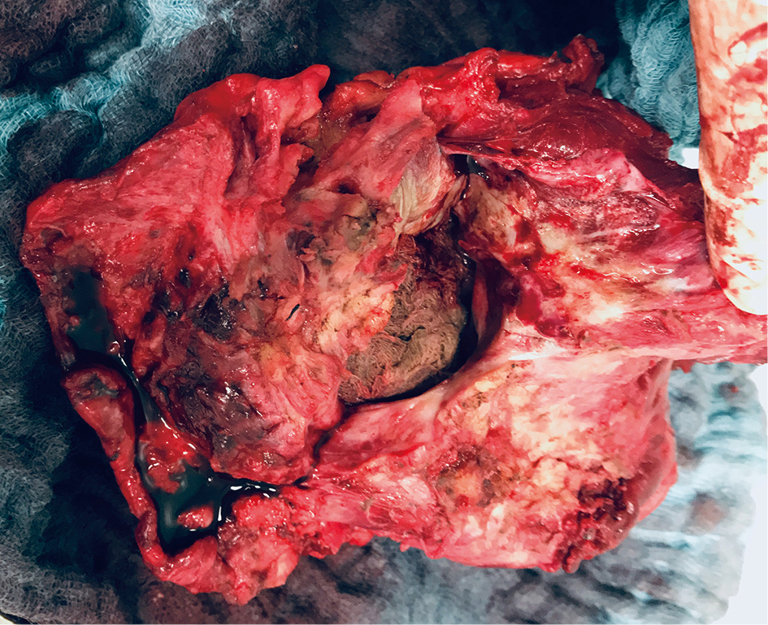 Postoperatively the patient was admitted to our intensive care unit for monitoring and treatment because of a sepsis. He could be transferred to the normal ward on the 3rd postoperative day. Streptococcus constellatus was found in the intraoperatively gained lung sample. A specific antibiotic therapy was conducted with Tazobactam for 5 days postoperatively. The remaining postoperative course was uneventful. The patient was discharged 12 days after the surgery (Figure 4). 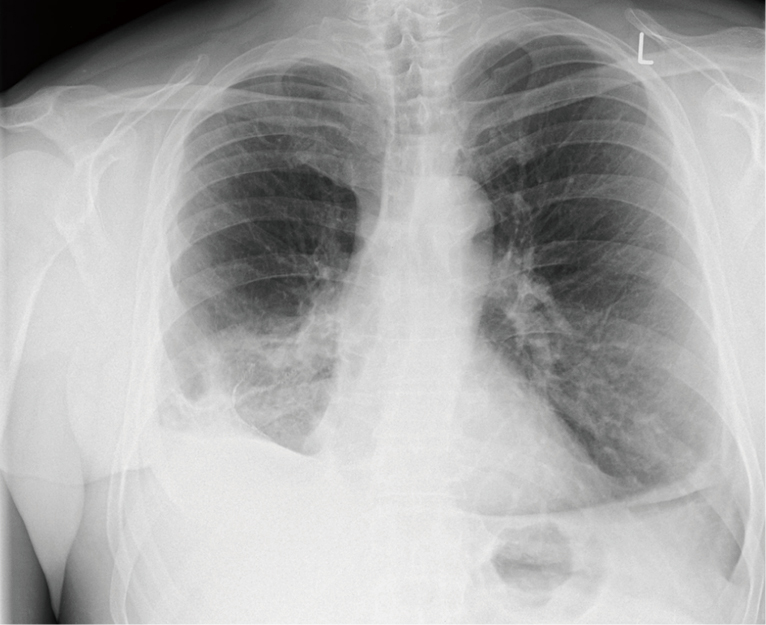 Figure 4 Chest X-ray of the patient before discharge.

A retained corpus alienum after surgery is a never event, however it still does happen more frequently that we would like to in the common practice. There are only few reports about this topic published in the literature. A review of Sokouti et al. from 2017 collected 37 case reports of intrathoracic gossypibomas (2), whereas vague estimations from insurance companies in the US postulate an incidence of 1:1,500. The misbalance of published and estimated numbers is probably caused by the fear of medicolegal consequences and damage of surgical reputation (3). Most of the reported cases are observed after abdominal laparotomy, however they can be witnessed in almost every kind of surgical procedure. After abdomen (56%) and pelvis (18%), the thorax is the third common place to discover a gossypiboma (11%) with an average postsurgical interval of 6–9 years (4).

The symptoms of retained foreign bodies may vary from cough, sputum, dyspnea, and chest pain to massive hemoptysis and even sudden death. Depending on the retained material and its position in relation to the nearby structures, local reaction, bacterial contamination and therefore symptoms occur in different patterns. Other factors such as patient age, state of health, body weight and underlying diseases are obliviously important factors as well.

Textile materials are seldom cause of specific reactions other than adhesions and encapsulation (5). This might be the reason for long-term inapparent courses. Complicated clinical courses are described in the presence of an exudative reaction with bacterial infection and abscess formation, as in our case. Internal and external fistulas and even drainage into hollow organs have been reported. In fact, a case report describes the suffocation of a patient after that a retained surgical gauze from a lung surgery performed more than 20 years before broke into the lower trachea and obstructed it (6).

CT scan might be the best method for diagnosis and for evaluating complications. But as the symptoms vary, the radiological findings do as well. Differential diagnosis can reach from haematomas and abscesses in early stages, to malignant or benign neoplasms, cysts or any kind of infections or calcifications. Up to 75.68% of retained bodies remain undiagnosed through radiological imaging (2).

The presented case shows that even PET-CT imaging is not always a completely precise diagnostic tool. In fact, a retained body may cause an inflammation, which obviously is detected in the PET-CT scan. For example, in this case, the high FDG uptake of the mediastinal lymph nodes was misleading, as it could have been a sign of malignancy.

Only surgery can solve these cases and bring a secure diagnosis.

With publishing this case we want to emphasize that, in patients with unknown intrathoracic masses and prior intrathoracic surgery, a gossypiboma should always be kept in mind in the differential diagnosis of the most unclear cases.

Preoperative diagnosis might be difficult to achieve, and the surgical procedure can be fairly complex, as our case shows, after 15 years of chronic infection.

Only strict implementation and execution of risk management and safety protocols during and before ending surgical procedures might prevent such events.

Conflicts of Interest: All authors have completed the ICMJE uniform disclosure form (available at http://dx.doi.org/10.21037/ccts.2019.11.11). The authors have no conflicts of interest to declare.