Primary malignant chest wall tumors (PMCWTs) are a heterogeneous group of neoplasms arising from bones and soft tissues of the thorax (1,2). These tumors are rare, representing less than 1% of all primary malignant tumors (2). Most PMCWTs are sarcomas (3), categorized according to the 4thedition of World Health Organization (WHO) Classification (4). Among sarcomas, chondrosarcoma is the most common primary malignancy of the chest wall (5). According to the literature, the most important factor affecting survival is complete resection of the tumor (1), hence the goal of surgery is wide resection with free margins of normal tissue, in order to prevent local recurrence. In case of wide excision causing extensive chest wall defects, both bony reconstruction and soft tissue coverage are indispensable (6-8). In this scenario, there are two possibilities to cover the chest wall defect: prosthetic or biological (allo- or homograft) mesh and/or tissue flaps (8-13). The aim of this study is to analyze different factors concurring to the outcome of patients with PMCWTs surgically treated in our Institution.

Between April 1982 and July 2019, 52 patients were surgically treated for PMCWTs at Padua University Hospital. Other types of chest wall tumors (benign or metastatic) were excluded from this retrospective study. The present study obtained ethics approval from the institutional review board of Padua University Hospital (PD00-19-03CT). Written informed consent was achieved from the patients for publication of this manuscript and any accompanying images.

PMCWTs were classified, according to the 4th edition of World Health Organization (WHO) Classification of sarcomatous tumors of soft tissue and bone (4), into the following groups: (I) adipocytic tumors, (II) fibroblastic/myofibroblastic tumors, (III) fibrohistiocytic tumors, (IV) smooth muscle tumors, (V) skeletal muscle tumors, (VI) vascular tumors, (VII) perivascular tumors, (VIII) chondro-osseous tumors, (IX) neuroectodermal tumors, (X) tumors of uncertain differentiation. Non sarcomatous PMCWTs were classified as “others”. In addition, PMCWTs were categorized, based on their tissue of origin, into 3 groups (2): (I) bony sarcomas, as osteosarcoma, chondrosarcoma and PNET/Ewing’s sarcoma, (II) soft tissue sarcomas, as liposarcoma, fibromatosis/fibrosarcoma, malignant fibrous histiocytoma, leiomyosarcoma, rhabdomyosarcoma, angiosarcoma, synovial sarcoma, malignant giant cells tumor, malignant PEC-oma and malignant ossifying fibromyxoid tumor, (III) others, as solitary plasmocitoma. Primitive sarcomas of the chest wall, according to the cancer cell differentiation, were grouped as G1 (low-grade sarcoma), G2 (intermediate-grade sarcoma) or G3 (high-grade sarcoma). Hospital records of the patients were reviewed and collected into a retrospective database. All relevant preoperative, intraoperative and postoperative variables were analyzed in order to identify possible prognostic factors. Follow-up information was obtained from clinical visit, imaging studies and phone interview. Descriptive statistics were reported as median for continuous variables and percentage for categorical variables. A Cox-Proportional Hazard model was estimated to assess the effect of covariates on patients’ survival. The relevant predictors were selected with a subset regression approach using the Bayes Information Criterion (BIC). Analyses were performed using R system (14) with the packages rms, survival (15), and gmulti (16). Results were considered significant if the P value was less than 0.05. Overall survival (OS) was calculated from the date of surgical resection to the date of death or last follow up. Survival functions was estimated using the Kaplan-Meier estimator.

Fifty-two patients underwent surgical resection of PMCWTs during the study period. Patient characteristics and type of surgical procedure are summarized in Table 1. There were 28 (53.8%) males and 24 (46.2%) females with a median age at time of surgery of 58 years (range, 21–85 years). Tumor was right-sided in 16 (30.8%) patients, left-sided in 19 (36.5%) and involved the sternum in 17 (32.7%). Isolated resection of the lesion without need of chest wall reconstruction was performed in 21 patients (40.4%), while reconstruction was necessary in 31 cases (59.6%). Prosthesis alone were utilized in 16 cases (51.6%), muscle flaps alone in 3 (9.7%) and both in 12 (38.7%). Flaps utilized were pectoralis major muscle in 10 patients, latissimus dorsi in 3, rectus abdominis in 1 and omentoplasty in 2. Non absorbable synthetic prosthesis were used in 21 cases (11 polytetrafluoroethylene and 10 polypropylene), while absorbable one in 1 (polyglactin). In 11 cases titanium plates were utilized, 9 of which in case of sternal allografts. Cadaveric sternal allograft was employed in 9 patients. Ribs were resected in 31 cases (59.6%) with a median number of resected ribs of 2 (range, 1–9), while clavicle in 3 cases (5.8%). Oncological complete resection (R0) was achieved in 36 patients (69.2%), whereas resection with microscopic (R1) and macroscopic (R2) residual tumor in 3 (5.8%) and 9 (17.3%) respectively and it was not reported in 4 cases (7.7%). Pathological examination showed sarcomatous disease in 48 patients (92.3%) and plasmocitoma in 4 (7.7%). In particular, there were 29 cases of bony sarcomas and 19 of soft tissue ones. Chondrosarcoma were the most frequent. Histological types are resumed in Table 2. Median maximum diameter of the neoplasm was 7 cm (range, 1.9–30 cm). Neoadjuvant and adjuvant therapy was administrated in 7 (13.5%) and 10 (19.2%) patients, respectively. 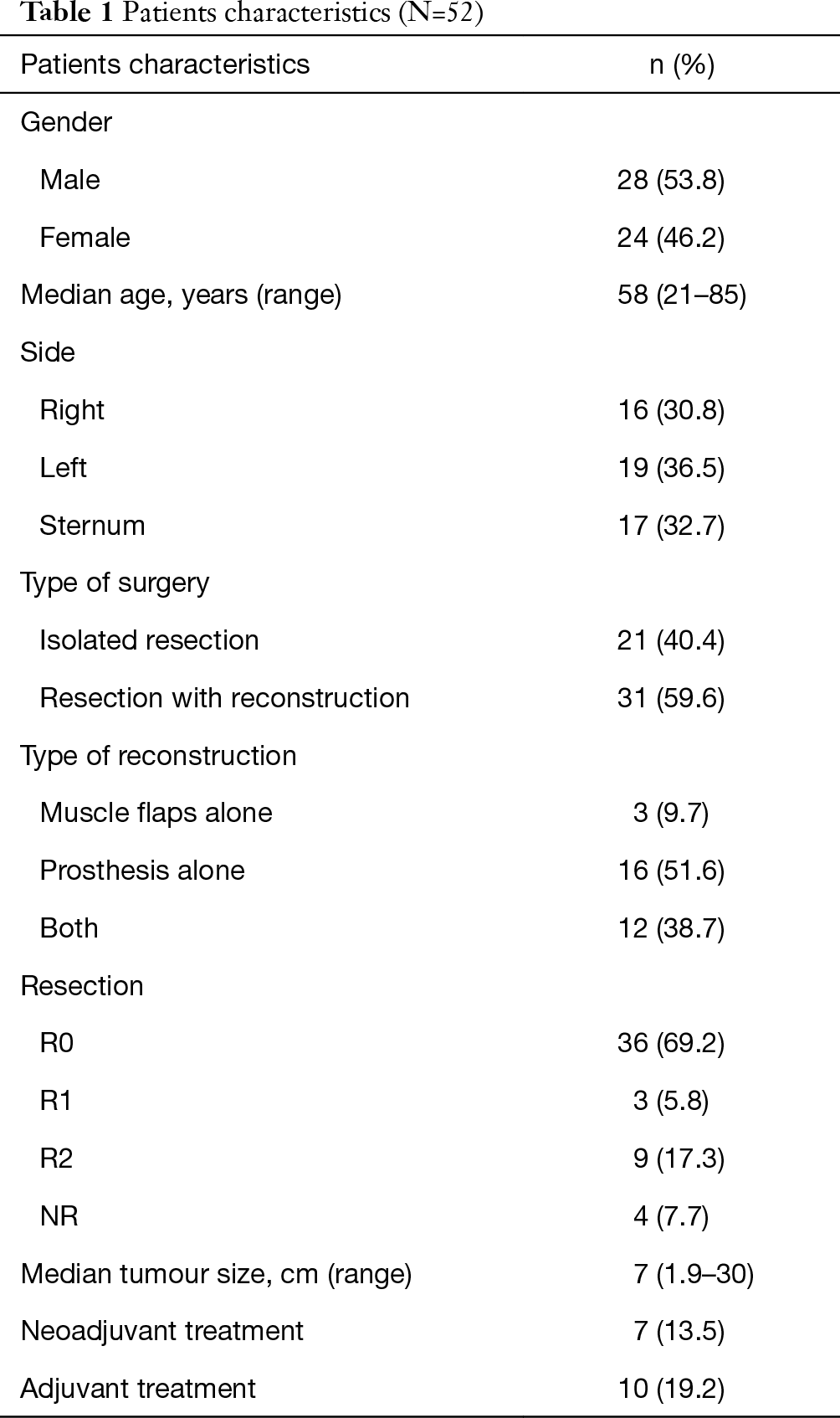 Data about complications were not available for 9 patients; of the remaining 43 patients, early post-operative complications occurred in 11 cases (25.6%): anemia requiring blood transfusion in 3 cases, atrial fibrillation treated with electrical cardioversion in 1, bilateral pneumonia in 1, empyema surgically treated with open window thoracostomy in 1, pneumothorax in 1, hyperpyrexia in 1, neuropathic pain in 1, chronic cutaneous fistula in 1, and wound dehiscence surgically treated in 1. Of the 11 patient experiencing complications, 10 underwent prosthetic reconstruction and particularly 6 had sternal reconstruction. No perioperative mortality was observed. 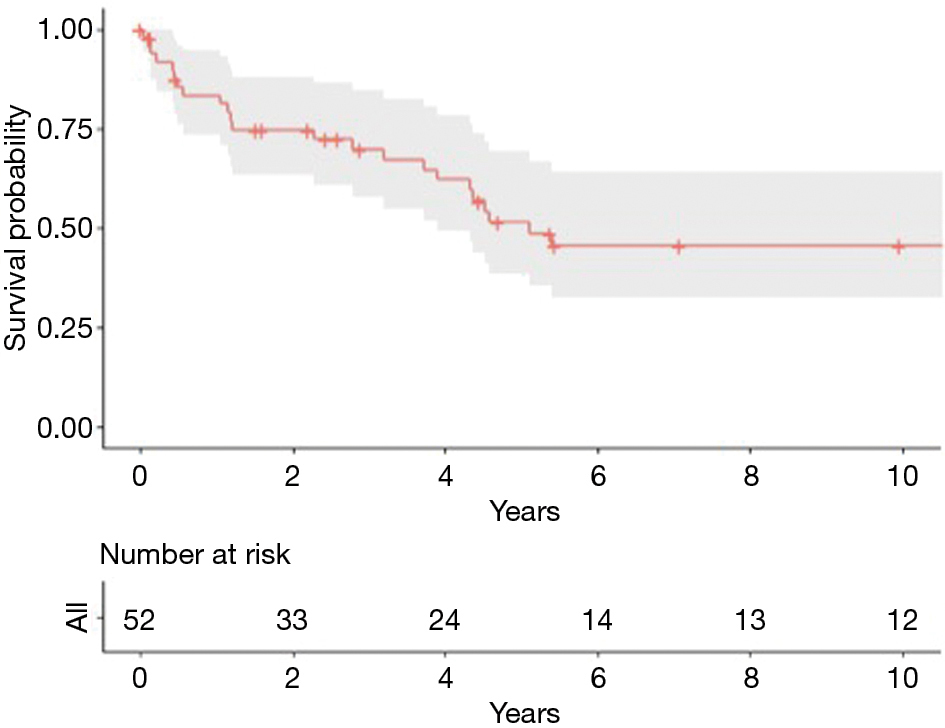 Data about recurrence were not available for 16 patients, hence an analysis about predictors of worse disease-free survival was not possible. Of the remaining 36 patients, 13 experienced relapses. The recurrence pattern for the first relapse was: local relapse in 7 patients, distant in 5 patients and unknown in 1 case. Among these 13 patients with recurrence, 7 underwent redo-surgery alone, 1 underwent chemotherapy alone, 1 underwent radiotherapy alone and in 4 the treatment was unknown. Four patients experienced a second recurrence and 3 of them had a third relapse.

PMCWTs are rare tumors, challenging both to diagnose and treat. Major series presented over the literature are summarized in Table 3. Surgical resection is the gold standard treatment for these neoplasms, exceptions include the “medical tumors”: Ewing sarcoma family of tumors, and solitary plasmocitoma (usually associated to latent multiple myeloma) treated solely with radiotherapy (6,7). The goal of surgery is wide resection with free margins of normal tissue of at least 4 cm on all sides, in order to prevent local recurrence. Additionally, if any structures are attached to the bone (pleura, lung, pericardium, thymus, or diaphragm) their excision is recommended (1,6,7). In case of lesions smaller than 5 cm or high posterior defects smaller than 10 cm (where the scapula provides support and protection) there can be no need of reconstructive procedures, while in case of wide excision causing extensive chest wall defects (>10 cm posteriorly, >5 cm in any other sites, or located where the near the scapula tip) both bony reconstruction and soft tissue coverage are indispensable (6-8). In this setting, surgeons can cover the chest wall defects with prosthetic or biological (allo- or homograft) mesh and/or tissue flaps (8-13), based on their expertise and preferences (6). Indeed, reconstruction of the chest wall guarantees the preservation of respiratory function and chest mechanics associated to the protection of intrathoracic organs (6,7). Morbidity rate after chest wall reconstruction in our case was 32.3%, lower compared to the literature (6), this may be due to a careful selection of fit patients undergoing surgery. In major series reported in the literature and summarized in Table 3, 1-year OS rate ranged from 52% to 89%, 3-year OS rate from 45.6% to 65%, 5-year OS rate from 33.3% to 57% and 10-year OS rate from 17.4% to 68%. Our experience is in line with literature data. In our study, the independent predictors of better OS were the no need of prosthetic reconstruction and chondro-osseous tumor histological type. Indeed, these data are confirmed by analysis of the literature, where histological type represents an important independent prognostic factor (8,17,18). The absence of prosthetic reconstruction may reflect the small dimension of the resected lesion and a less aggressive tumor; indeed, also King and Colleagues found the extent of invasion of the tumor as an independent prognostic factor (17). The complete resection of the tumor represents the most important factor for survival according to Ito et al. (1), but in our case it did not impact on survival, perhaps this is due to the low numerosity of the uncompleted resection (R1 and R2) subgroup. Recurrence rates for PMCWTs reported in literature ranged from 25% to 100% (19-21), in line with our experience.

Surgical resection is the gold standard treatment in case of PMCWTs. A careful pre-operative selection of fit patients, especially in chondro-osseous subtype without prosthetic reconstruction leads to good survival outcomes with acceptable morbidity.

Conflicts of Interest: All authors have completed the ICMJE uniform disclosure form (available at http://dx.doi.org/10.21037/ccts.2019.11.08). The Focused Issue “Thoracic Surgery Without Borders” was commissioned by the editorial office without any funding or sponsorship. The authors have no other conflicts of interest to declare.