Primary breast sarcoma is an extremely rare disease: it represents less than 0.1% of breast cancers and less than 5% of all sarcomas (1) and in most cases it affects women, with a prevalence of 97.6%. Breast sarcoma derives from the mesenchymal tissues of the breast and can originate a histologically heterogeneous group of neoplasms such as fibrosarcoma, angiosarcoma, leiomyosarcoma, pleomorphic sarcoma, liposarcoma, myxofibrosarcoma, hemangiopericytoma, osteosarcoma and chondrosarcoma. Breast sarcoma is generally unilateral with rapid growth and affects patients with an average age of 49.5 years (2). Primary breast sarcoma has a poor prognosis and the median 5-year overall survival is 63.5% (range, 55–73%) (3,4). Currently, diagnosis and treatment of this pathology are a challenge for pathologists, surgeons, radiotherapists and oncologists.

The median size of the neoplasm at diagnosis is about 5 cm, but cases of sarcomas of 30 cm are also described in literature (5,6). Breast sarcoma does not have an easily recognizable radiological pattern. On mammography, it can present as an opaque mass without spiculated margins and internal calcifications, mimicking benign breast nodules (7). In these cases, for a diagnostic purpose, ultrasonography (US) and magnetic resonance (MR) are more specific than mammography (8,9).

Concerning the therapeutic issue, nowadays it is recommended to base the treatment approach to breast sarcoma on multidisciplinary strategies including surgery, radiation therapy and systemic chemotherapy in selected patients. Surgery is the gold standard for the treatment of breast sarcoma. The extent of the excision does not seem to impact on prognosis as long as it takes place on disease-free margins (R0) of at least 1 cm, 3 cm in case of an angiosarcoma (10). In locally advanced tumors with infiltration of the pectoral muscles and chest wall, a demolitive surgery with reconstruction of myocutaneous flaps is recommended, provided that a margin of at least 1 cm can be guaranteed (11). Breast sarcoma metastasizes by hematogenous route and lymph node dissemination is rare (2.6% of patients) (12). To date, the advantage of a radical dissection of axillary lymph nodes is not clear and axillary lymphadenectomy must be reserved to patients with histological diagnosis of axillary lymph node dissemination or to those cases in which local disease control must be obtained. The role of adjuvant treatments also remains undefined. Data obtained from previous studies, in consideration of the rarity of the disease, derive from low volume case studies. The advantages of performing an adjuvant radiotherapy or chemotherapy treatment in patients undergoing surgery did not find a statistically significant increase in terms of overall survival (13). Adjuvant radiotherapy is however recommended in patients with a high-grade sarcoma of over 5 cm in size or in cases in which surgery failed to achieve negative margins (R1 or R2 margins) (14).

Sarcomas are poor responders to systemic chemotherapy (rates ranging from 20–40%). Therefore, the role of adjuvant systemic chemotherapy in patients with sarcoma of the breast is not yet clear (15). Current recommendations are based on studies conducted on any type and grade of sarcoma. A systematic meta-analysis of randomized controlled trials on adjuvant chemotherapy for localized resectable soft tissue sarcomas concluded that adjuvant chemotherapy offered patients marginal survival benefits and limited local or distant recurrence benefits (16). We present the following case in accordance with the CARE-Guideline (17).

A 56-year-old Macedonian woman was sent to our Hospital’s Emergency Room for hyperpyrexia. Blood tests were performed, documenting an increase in phlogosis indexes and a severe hydro-electrolyte imbalance with hypokalemia and severe anemia. The patient’s physical examination showed the presence of a heteroformation of the right breast of about 29 cm in diameter with surrounding red skin with multiple ulcerations, some of which were bleeding, while others presented purulent secretion (Figure 1). The collection of anamnestic data was difficult due to the linguistic gap but it was learned that the patient had been treated six months earlier, in another Center, with radical mastectomy and ipsilateral axillary dissection for high-grade (G3) metaplastic sarcomatoid carcinoma of the right breast with chondrosarcomatous differentiation aspects. Surgery had also resulted in functional damage to the right arm, that was paralyzed. The patient was subjected to an ultrasound of the heteroformation, and the presence of a corpuscular fluid collection was documented. A drainage of the collection was performed, and the fluid was sent for culture test, that resulted positive for Staphylococcus Aureus. The patient was therefore admitted to the Oncological ward to undergo transfusion, electrolyte rebalancing and targeted antibiotic therapy. In the following days, there was a clinical improvement of the patient’s general conditions but a progressive local worsening of the heteroformation was noted, due to an increase in size and the presence of progressively widened ulcerated areas with continuous bloody secretions. The total body computed tomography (CT) scan documented infiltration of the large and small pectoralis muscles, of the III and IV right ribs and of the sternal body (Figure 2). No distant metastases were found. Considering the patient’s clinical conditions and the absence of metastasis, the collegial multidisciplinary discussion of the case lead to the decision to attempt surgery.

Figure 1 A 29 cm width right breast heteroplasia with ulcerations and signs of infection. 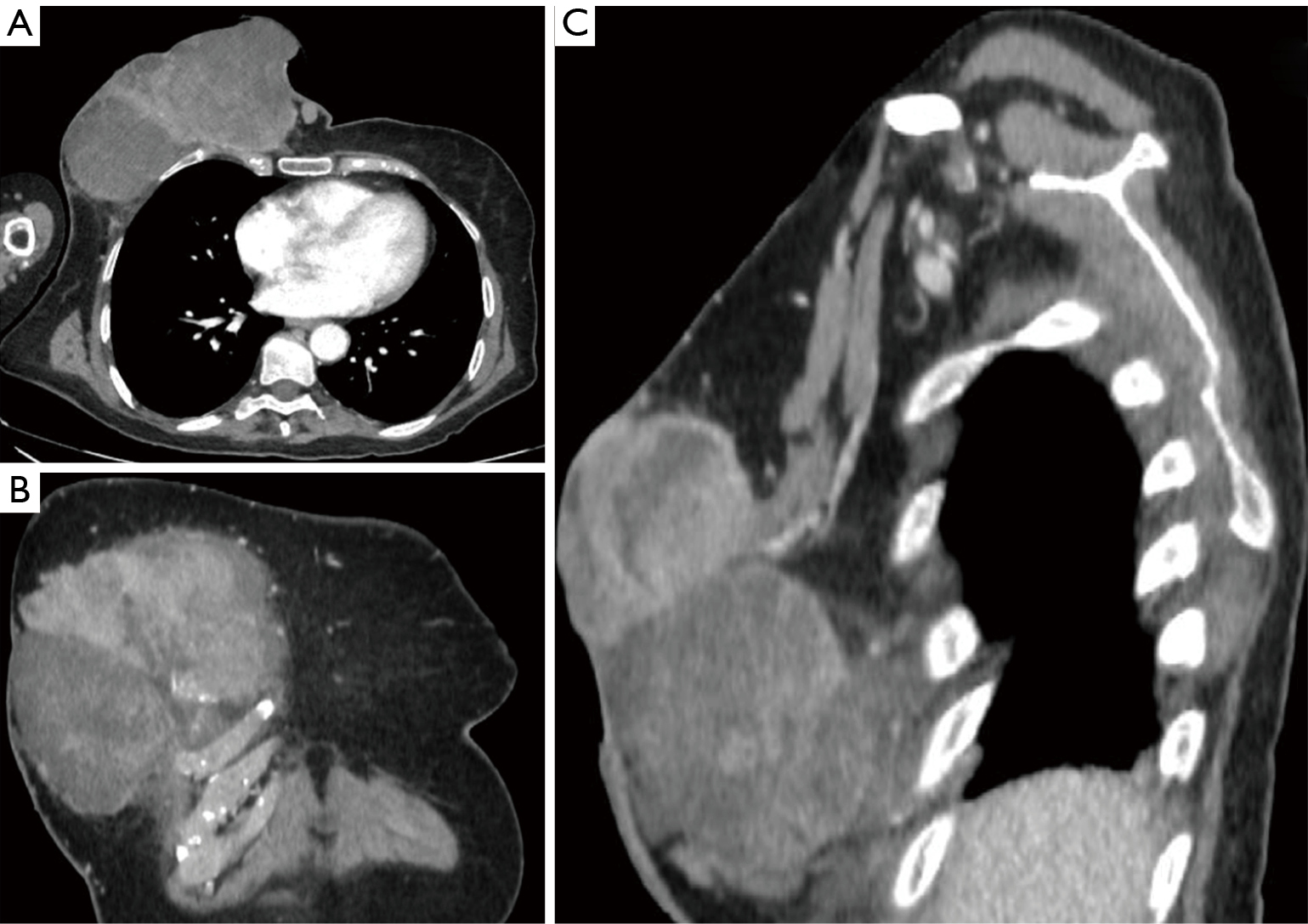 Surgical removal of the giant sarcoma was performed together with the pectoralis major, pectoralis minor and serratus anterior muscles and with the resection of the affected anterior arch of III and IV ribs en bloc with the sternal body, with bilateral closure of the mammary arteries (Figure 3).

Figure 3 Result of the surgical removal of the giant sarcoma together with the pectoralis major, pectoralis minor and serratus anterior muscles and with the resection of the anterior arch of III and IV ribs en bloc with the sternal body.

A 2 mm thick Goretex prosthesis was then placed over the thoracic defect (about 12×8 cm2 with exposed pericardium, right and left pleural cavities) for an initial reconstruction (Figure 4). Plastic surgeons subsequently intervened using a gran dorsal myocutaneous rotated flap (Figure 5), plastic sliding of the margins, reverse abdominoplasty and auto-dermo-epidermal grafts to cover the superficial part of the exposed dorsal muscle, ensuring a better stability of the wound and a lower risk of infection. Pleural drainages were then placed: one on the right hemithorax, one on the left and three in peri-prosthetic positions. In the following 48 hours, the patient was subjected to intensive monitoring in the Post-Operative Intensive Care Unit and was transferred to our Thoracic Surgery Unit on the third post-operative day. 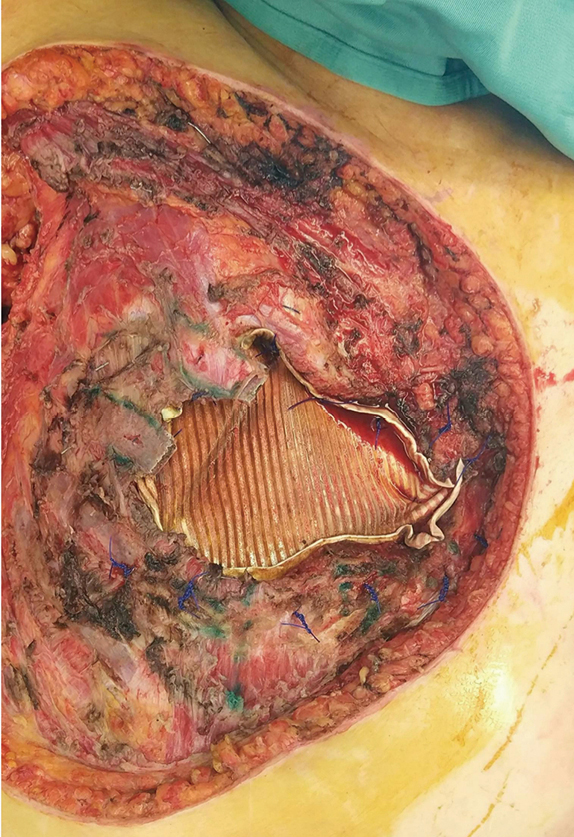 Figure 4 Reconstruction of the thoracic defect (about 12x8cm with exposed pericardium, right and left pleural cavities) with a 2 mm thick Goretex prosthesis.

Figure 5 Preparation (A) and positioning (B,C) of a gran dorsal myocutaneous rotated flap to cover the defect and the Goretex prothesis to ensure a better stability of the wound.

The post-operative course was characterized by a slow recovery with some complications related to the amount of tissue removed. In fact, an abundant fluid loss was documented from the demolition area of the chest wall, causing a persistent hypoalbuminemia with the appearance of diffuse edema. Intravenous albumin was administered until the wound conditions stabilized and the loss of fluid reduced with a progressive decrease in edema. For the mechanical ventilation deficit of the right hemithorax, the patient was subjected to daily respiratory physiotherapy until the reach of a satisfactory respiratory dynamics. After a week, stability and good vitality of the dorsal muscle rotation flap began to be documented and discrete skin auto-graft took place (Figure 6). On the second post-operative week there was a new anemization, accompanied by the appearance of a supra-prostatic blood collection so that, after performing a chest CT scan, the patient underwent a second surgery where bleeding from the rotate muscle was documented and solved. The remaining post-operative course was uneventful, with progressive stabilization of the wound and of the dermo-epidermal graft. Progressive removal of the drainages was performed.

Figure 6 Evolution of the wound on the 7th post-operative day with good vitality of the dorsal rotation flap. The area of skin with a different color is the site of apposition of the skin autograft with complete rooting.

The histological examination of the surgical resected portion of the right hemithorax documented a voluminous neoformation of about 29 cm, with satellite nodules of inhomogeneous appearance, diffusely hemorrhagic and with ulcerated overlying skin, together with a sternum tract and two costal segments of 11×6.5×1.7 cm3. The definitive histological diagnosis was “metaplastic sarcomatoid carcinoma with a prevalence of spindle cells and giant multinucleated cells with osteoclastic aspects and sparse areas of osteo and chondrogenic-like appearance”. All resection margins were disease free (R0) with a minimum margin of 2 cm.

The patient was discharged on the 30th post-operative day in good clinical conditions. The surgical wound was in order, the dorsal muscle flap was vital and there was engraftment of the cutaneous autografts on 80% of the wound, with initial re-epithelialization of the remaining parts (Figure 7).

Figure 7 Thirtieth post-operative day. Well-healed wound with engraftment of the cutaneous autografts on 80% of the wound and initial re-epithelialization of the remaining parts.

Follow up continued for the first 6 months, documenting no recurrence of the disease; the patient subsequently decided to return to her Country of origin.

Nowadays it is difficult to find patients suffering from tumors of this size and consequently the treatment is made more complicated by the lack of experience. With this case report we share our experience in the treatment of an infrequent pathology that has presented itself to us with dimensions rarely reported in the literature.

Nowadays, surgery is the gold standard in the treatment of breast sarcoma, while radiotherapy or chemotherapy treatments play a marginal role. Surgery is needed in these patients to proceed to the removal of the neoplasm, even in advanced cases with wall infiltration, provided that the exeresis occurs on macroscopically healthy margins as this represents the most important prognostic factor for recurrence. The removal of locally advanced giant breast sarcomas (29 cm in our case) requires a highly demolitive surgery and a challenging reconstruction of the thoracic wall. A multidisciplinary surgical teamwork is indispensable both for attempting such an extreme surgery and for managing tissue loss-related complications. The limits in the treatment of this patient were represented by a surgical procedure performed while the patient’s clinical conditions weren’t optimal because of the ongoing recovery from her previous septic status and because of unstable general clinical conditions.

Surgical removal of a giant sarcoma of the breast needed a multidisciplinary team- work and an intensive post-operative monitoring of the patient. The surgical treatment of sarcomas is challenging for the whole medical team managing the patient, but it represents an important curative chance for the patient, even in extreme cases of giant tumors, where surgery itself must go beyond its conventional limits.

Conflicts of Interest: All authors have completed the ICMJE uniform disclosure form (available at http://dx.doi.org/10.21037/ccts.2019.12.03). The Focused Issue “Thoracic Surgery Without Borders” was commissioned by the editorial office without any funding or sponsorship. The authors have no other conflicts of interest to declare.

Ethical Statement: The authors are accountable for all aspects of the work in ensuring that questions related to the accuracy or integrity of any part of the work are appropriately investigated and resolved. Written informed consent was obtained from the patient for publication of this study and any accompanying images. A copy of the written consent is available for review by the Editor-in-Chief of this journal.