Lung volume reduction surgery (LVRS) is a surgical technique to remove emphysematous portions of lung with aims at enhancing overall pulmonary function. There are multiple postulated mechanisms as to how LVRS provides benefit including improvements in elastic recoil, diaphragm function via decreased functional residual capacity, left ventricular filling, cardiac index through decreased intrathoracic pressure, and endothelial function (1-4). Our understanding of LVRS outcomes are largely based on the National Emphysema Treatment Trial (NETT) randomized trial. This study demonstrated early mortality over 15% in patients with a forced expiratory volume in one second (FEV1) under 21 percent predicted and either homogeneous emphysema or diffusing capacity of carbon monoxide (DLCO) under 21%. At the same time, the trial demonstrated that the surgery is most beneficial for those with poor exercise tolerance and pulmonary function tests (PFTs) (relative risk of 0.57) (5). Patient selection therefore is crucial in order to find the upper-lobe-predominant-emphysematous-sick-but-not too-sick patient population that will not only most benefit from LVRS, but will be least harmed (6). That being said, even with ideal physiology, aberrant anatomy and other patient factors may require surgical problem solving. Here we present such a case, where the presence of an azygos lobe, borderline pulmonary function, and previous pneumothorax complicated the lung reduction evaluation and intervention.

A 51-year-old male with a history of COPD, atrial fibrillation and right spontaneous pneumothorax treated with tube thoracostomy, presented to our office as a referral from pulmonology for LVRS consideration. At the time, he had been a non-smoker for 2 years but was suffering from regular COPD exacerbations in additions to progressive dyspnea despite 2 L of oxygen at rest. The patient’s PFTs put him just on the edge of appropriateness for LVRS (FEV1% predicted of 20%) but perfusion imaging demonstrated an ideal COPD distribution with only 3% of perfusion to the bilateral upper lobes (Table 1). It was felt that if the patient demonstrated clinical improvement after pulmonary rehabilitation, he would be a surgical candidate. Imaging however, demonstrated an azygos lobe; the combination of this finding with the previous right tube thoracostomy, made a right-sided intervention high-risk. After discussing with the team and ensuring the patient’s understanding of the high-risk nature of the surgery, the decision was made to proceed with a left unilateral, and possible future-sequential, LVRS after the patient completed 3 months of pulmonary rehabilitation. The patient moved forward as planned and tolerated a unilateral left LVRS well. At his first follow up appointment he had already weaned to 1 L of oxygen and by his 3-month visit was notably less short of breath on exertion, supported by improved PFTs (Table 2). The patient requested lung reduction on the contralateral side and given his improvement after the initial surgery, the decision was made to proceed with right sided LVRS 6 months after the left.

This second surgery was anticipated to be more difficult than the first. The previous pneumothorax and subsequent chest tube placement meant the possibility of adhesions to a delicate emphysematous lung and the presence of an azygos lobe would require more extensive dissection and a more complex resection. In combination, the risk of bleeding, prolonged air leak and injury to “healthy” lung would be high. After reviewing both anatomical and functional imaging (Figure 1) with the Thoracic Radiology team, the patient was taken to the OR for VATS right lung reduction with a plan to resect the azygos lobe and most of the apical segment. Fortunately no adhesions were encountered in relation to the previous thoracostomy tube and the azygos lobe with associated laterally displaced azygos vein were present as expected. Isolation of the azygos lobe was achieved with little dissection and the resection of diseased lung was carried out with reinforced staple loads without incidence (Figure 2). Of note, special attention was paid to minimizing handling and therefore injury to lung outside of the field of resection. A pleural tent was created prior to closure to aid in visceral-parietal pleural apposition, particularly in the apicoposterior space where the azygos lobe was removed.

Figure 1 Sagittal and axial cuts of a chest CT scan demonstrating COPD with a bilateral apical predominance as well as demonstrating an anomalous lateral azygos vein with an associated azygos pulmonary lobe. 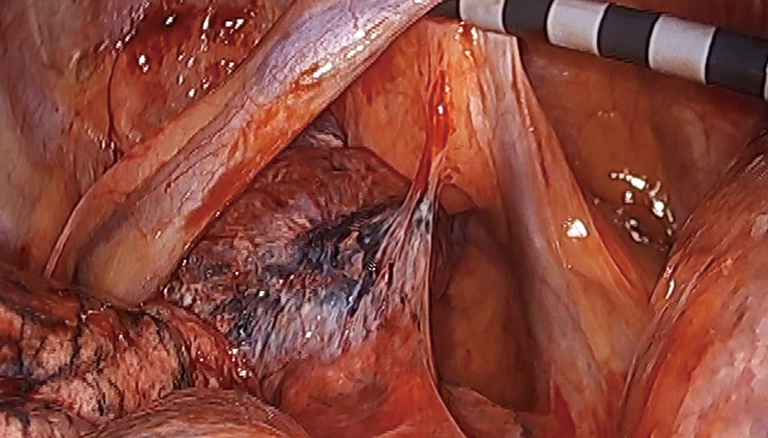 The patient progressed well after surgery and, after drain removal, was discharged home in good condition on post-operative day 4 on 0.5 L of oxygen. Over the next month the patient weaned off of all day-time oxygen and subjectively had a much improved functional status. His 6-month PFTs demonstrated improvement and he continued to require only minimal night time oxygen (Table 2).

LVRS can be a very beneficial option for those with severe COPD, however the window of therapeutic benefit is narrow and so patient selection is crucial. This selection is based on a combination of activity status, PFTs, and imaging. Even when these criteria are met, anatomical anomalies and previous surgical intervention can add risk. When a single hemi-thorax poses risk for intervention, unilateral or staged LVRS is an option.

Early data suggested that unilateral reduction was associated with a shorted length of stay and a lower likelihood of mechanical ventilation (7) with similar clinical benefit (8), however with more widespread adoption of minimally invasive surgery, those benefits have decreased and bilateral surgery continues to demonstrate better results by pulmonary function testing (9). For the select patients above however, unilateral surgery is still an option as it allows for a smaller initial intervention on the lower-risk hemi-thorax, as well as for delayed reevaluation of the higher risk side. As with the presented case, if the patient tolerates the initial surgery well and demonstrates improved pulmonary function, this may not only predict benefit of further reduction, but also reduce the risk of intervening on the more complex side and prolong improvements in spirometry (10).

Any need for additional dissection during a lung reduction surgery offers the possibility of added post-operative morbidity. For this reason, previous thoracic surgery is a contraindication to LVRS due to the expected adhesions. However, lesser confounders such as the presence of an azygos lobe and previous tube thoracostomy, though not ideal, should not be considered contraindications to lung reduction. As we have shown, with careful planning, a staged approach and intraoperative respect of non-resected lung, otherwise acceptable LVRS candidates can still be treated surgically.